It has now been 75 years since over 330,000 allied soldiers were evacuated from the beaches of Dunkirk – yet the evacuation story that began on 27 May 1940 continues to be retold – vivid in the imagination and memory. This year the anniversary will be marked by various special events, including a flotilla of fifty boats that were involved in the original mission – code named Operation Dynamo – that has sailed from Kent to France.

To coincide with this important anniversary, we are sharing an extract from Robin Prior’s latest book, When Britain Saved the West: The Story of 1940. As eloquent as it is controversial, this book exposes the full import of events in 1940 when Britain, unsupported by any other nation, faced near-certain defeat at the hands of Nazi Germany, and the fate of Western civilisation hung in the balance. This excerpt comes from Chapter 5 of When Britain Saved the West and is an account of events leading up to the evacuations, which started on 27 May and continued to 4 June 1940.

When Britain Saved the West: The Story of 1940 by Robin Prior

The Great Escape, from Chapter 5

As early as 20 May, Colonel Whitfield had been ordered to Dunkirk to arrange for the evacuation of ‘unwanted mouths’ already in the area. The men rather unflatteringly referred to were some headquarters staff moved from Arras, administrative and line- of-communication staff and other non- combatant soldiers who happened to be near the port. Whitfield found his task challenging. Many of the officers and men had been cut off from their units for some time and their morale, not improved according to Whitfield by being described as ‘unwanted mouths’, was low. An attempt at an orderly evacuation broke down. Officers left their men and rushed the boats; groups of men also panicked. Military police sent to restore order took the first opportunity to embark for England. The ‘miracle’ in this period was that anyone got off at all, but from 20 to 25 May, Whitfield managed to send about 28,000 men to England. Nevertheless, such a shambles could hardly continue if large numbers of the BEF were to be saved. Fortunately for the British, planning for a major evacuation had been under way in London for some time.

It was General Pownall’s phone call on 19 May that provided the trigger. Churchill immediately alerted the Admiralty that Gort might retreat to the sea and that they should make provisions against a necessity that ‘seemed far away’. Next day the prospect of an evacuation seemed not far away at all and Churchill instructed the Admiralty ‘as a precautionary measure’ to ‘assemble a large number of small vessels in readiness to proceed to ports and inlets on the French coast’.5 Later that day a committee of representatives from the War Office and the Admiralty met with Admiral Ramsay, Naval Commander, Dover, to arrange for the assembly of as many ships as possible to meet the War Cabinet’s demand. The number of ships at Dover available for such an operation was listed, though at the end of the minutes the following note was appended: ‘It will be realised that these notes provide for an emergency which may arise only in certain circumstances.’ Nevertheless, they hastened with their preparations for these circumstances. Ramsay immediately consulted other naval bases around the coast about additional craft and was alarmed to find that he would have at his disposal no more than 40 destroyers. To these he added requisitioned passenger vessels and ferries, 50 Dutch motor vessels, and a host of smaller privately owned pleasure vessels, fishing boats and yachts. Would they be sufficient? Ramsay hardly had time to contemplate. The evacuation – codenamed Operation Dynamo – was to begin on 26 May.

Ramsay made two decisions on receipt of the evacuation order. He immediately dispatched what passenger vessels he could muster to Dunkirk and sent Captain Tennant to act as Senior Naval Officer there along with 160 naval ratings (sailors) to help him organise the evacuation.

Tennant set sail from Dover on the destroyer Wolfhound in the afternoon of 27 May and arrived at Dunkirk at 6 p.m., after suffering a series of attacks from Stukas. What he found appalled him. Dunkirk town and harbour had been under attack by the Luftwaffe for most of the day. Tennant saw a town ablaze from end to end, ‘the streets being littered with wreckage of all kinds, and every window . . . smashed. Great palls of smoke from the oil depots and refineries enveloped the docks and town itself.’ After a quick reconnaissance Tennant signalled Ramsay that embarkation was impossible from the docks and that ships should be sent to the beaches east of the harbour. The naval ratings were ordered to spread out along the 10 miles of coastline to act as guides to troops making their way towards the sea.

The destruction of Dunkirk port on 27 May raises questions about the effectiveness of the RAF. For the first time since the shooting war began they should have been operating at some advantage. Until Dunkirk the air force had found it difficult to give direct support to the troops. The position of British units was often not known with certainty and the numerical superiority of the Luftwaffe usually made support a hazardous undertaking anyway. Now, however, the exact position of British troops would be known. And the bulk of the Luftwaffe would be operating at the outer limits of its range. The Germans had brought a few forward airfields into operation, but most of the fighters and all the bombers would have further to fly than the RAF squadrons based in south- eastern England. In particular the Me 109 fighters would have less time over Dunkirk than the British squadrons.

But the potential advantages favouring the British were not really exploited by Air Chief Marshall Sir Hugh Dowding, the commander-in-chief of Fighter Command. With a force of some 40 squadrons of 16 aircraft, he allowed Air Vice Marshall Sir Keith Park, the commander of 11 Group based in the south- east of England, just 16 squadrons for operations overDunkirk. No doubt Dowding was concerned with the heavy losses that the Germans had inflicted on his fighter forces during the French campaign. Since 10 May, 290 Hurricanes had been destroyed, the equivalent of 18 squadrons. This left Dowding well short of the 60 squadrons he deemed necessary for home defence. Yet 60 squadrons may well have been an excessive estimate, especially considering that such numbers were never deployed during the Battle of Britain. And his Dunkirk policy was parsimonious to the point of danger. With only 16 squadrons, Park could not maintain standing patrols over Dunkirk during daylight hours, giving the enemy free rein over the beaches and port. If the Luftwaffe could wreak enough havoc on troops,ships and port facilities to prevent the evacuation of the BEF, then what good would Dowding’s anti- invasion force of fighters be? A government that had just lost its army might well have made peace rather than face invasion. By his policy Dowding had elevated Fighter Command to the front rank of Britain’s defences – ahead of both the BEF and the navy. This was not only a risky decision, it was not Dowding’s to make. However, the political leadership seemed unaware of what he was doing. The troops and sailors at Dunkirk would have a greater awareness in the days that followed. 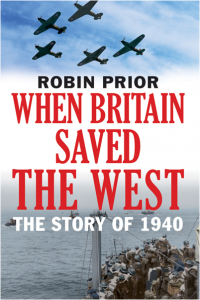 A Visual History of Household Servants and Slaves

In this blog, Yale author Diane Wolfthal brings the visual representation of household workers in medieval and early-modern…