As the National Gallery London appoints new director Gabriele Finaldi, we look back at a fascinating correspondence between two art history heavyweights, and the moment Kenneth Clark was invited to fill the same post more than 80 years ago.

On 28 August 1933 Kenneth Clark wrote a letter to Bernard Berenson telling him that he had accepted an offer to become the new director of London’s National Gallery. The pair had met in Italy during the summer of 1925 and from that moment on they exchanged letters until Berenson’s death in 1959 at the age of 94. My Dear BB: The Letters of Bernard Berenson and Kenneth Clark is the first publication of the complete correspondence between these two eminent art historians and the letters cast Clark and Berenson in a new light. These exchanges, which convey the men behind their public reputations – as vivid figures of intrigue and fascination – provide readers with a very personal biography of both scholars and a vivid picture of the art world in the first half of the twentieth century.

To celebrate the National Gallery’s appointment of new director, Gabriele Finaldi, we are sharing two letters from August 1933 when Clark became the youngest person to ever assume the role, at the age of 30.

I have just received a letter offering me the directorship of the National Gallery, which I have accepted. It would have been the act of mugwump [sic] to refuse. My appointment is a melancholy proof of the lack of serious interest taken in art-history in England, & I do not regard it in any other light – except, perhaps, as a tribute to my conciliatory disposition. My chief duty will be to end a long period of quarrelling. My appointment is only for five years, after which I can retire & lead a reasonable life, having worked the poison out of my system. I shall only be 35 so with God’s help I shall not altogether have lost the power of contemplation & composition. Naturally I am very pleased at my appointment.

The work here, though petty, was burdensome, & if I must give up my time to administration I would rather it were the National Gallery. Of course it will stop me writing books – but then they might have been bad books.

We are very much enjoying all your articles on drawings, & looking forward to the Dedalo with the article on Verrocchio. I don’t believe I ever thanked you for sending me a number of tirages apart, which I was delighted to have. How is Mary? We heard rather a bad report of her lately. I wrote to her about her travel book, which I much enjoyed. Unfortunately she did not believe my praise to be sincere, & wrote me a letter to that effect, which I did not enjoy.5 She is mistaken.

I thought it very well done & most interesting. I have lent it to several friends who have liked it as much as I did.

We have had a wonderful summer, each day more beautiful than the last. Most of our time has been spent in moving my mother into a new house, and we have not had any official holiday, though no doubt the life of museum director is one long holiday. We are going away at the end of this week, more as a holiday for Jane, who needs a rest from children & servants. We are going for a motor tour in England; & at the end of the month we are going to Madrid for a few days as I can hardly take on my new work without having visited the Prado. Meanwhile the Ashmolean is being eviscerated. I have made a plan for rearrangement & extension which I fear will not be finished before me – rather annoying as I am paying for it. You will have heard that we got the Piero di Cosimo Forest Fire – yes, I told Mary. I have had it cleaned and the result is really magnificent – it has the colour of a Hieronymous Bosch or Brueghel, & is in really lovely condition.

With love to you all from us both,

We are all delighted with yr. appointment to the directorship of the N. G.

You can do a great deal while occupying it for the institution as well as for yr. own education.

One’s education is the important point, & its importance increases with one’s years. And it is not a merely self regarding matter. The better educated one gets the more one educates society. God knows society needs it.

The N. G. will be a school in which you can be headmaster and first pupil all at the same time.

Nicky & I are just leaving for Vienna. I want to look over the drawings & other art treasures before the worst happens there. Then we shall pay visits & end up perhaps with a run down to Spoleto. I want to see how much I shall have to do there in connection with my next big undertaking.

Dedalo has died & not en beauté. My Verrocchio article nearly got buried with it. Only today have I got back the mss & the photo’s are still out. Without these I cannot as much as offer the article to another mag. I may send it to the Bolletino but the new director general of the Fine Arts thinks of nothing but economy & the existence of the Bolletino as more than a noticeboard is doubtful.

You know they have reintroduced payment to museums etc. So as usual during the last 45 years I sent in the request for free entrance. After two months I got the answer that it could not be granted as I came in under no category to whom this privilege was extended.

Here too we have had a most beautiful summer. Mary on the whole has been gaining since she came up here, & her spirits are ever so much better. The certain success of her book and other books she is preparing have given her a new zest for life.

Nicky has been with all three Anreps at Sorrento for four weeks.

Affectionate greetings to both of you.

My Dear BB: The Letters of Bernard Berenson and Kenneth Clark is available from Yale University Press. 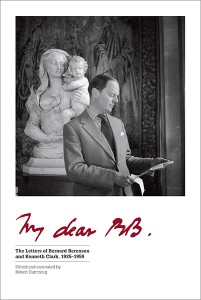 One hundred years since Amundsen beat Scott to the South Pole, but who was the real victor in Antarctic discovery?

This year marks the centenary of the first expeditions to reach the South Pole, a momentous challenge, and…