What was it like to live in Roman Britain? Much ink has been spilled on the archaeological remains that still exist in Britain today, such as Aquae Sulis (the modern city of Bath), Fishbourne Roman Palace in West Sussex and the world famous Hadrian’s Wall. A great deal has also been written on the government and military campaigns in Roman Britain during this 400 year span – but Guy de la Bedoyere’s new book, The Real Lives of Roman Britain, is the first publication to shed light on the lives of individuals during this period of history. The book shifts the focus from famous characters such as Julius Caesar, to individual human experiences, focusing on personal stories and first-hand accounts that shed new light on Britain under Roman rule.

In the following piece Guy de la Bedoyere explains what motivated him to write this work and what he hoped it might achieve, as well as giving us an insight into some of the fascinating people that inhabit his new book.

The Real Lives of Roman Britain

Roman Britain was a key period in the history of these islands and the surviving remains, in particular those of Hadrian’s Wall, are a potent reminder of that. I have been interested in the period almost all my adult life but my recent time as a history schoolteacher has really helped me to see this as an intensely individual human experience. I have become steadily more interested in how history is shaped by the impact of the world on individual people.

In this book I have tried to move away from the campaigns of legions, the process of developing Roman government institutions and facilities, and the archaeology of Roman villas – amongst many other such topics. Our route into the world of individuals in Roman Britain is through, mostly, the written record though there are also the physical remains of bodies and artefacts. What really intrigued me is that we are almost only able to access the period through the evidence left either by immigrants or by indigenous people who had become so Romanized that their ethnic origins have become subsumed into their assumed Roman identifies.

The whole concept of the book was crystallized for me when I visited Australia and was given a copy of photographs taken in the late 1800s and early 1900s. The immigrants and their towns, houses, shops, ships, carts and roads we can all recognize, understand and access. The indigenous population are pushed to the background, spectral figures lurking in the distance. This is our picture of Roman Britain. Here we have the first face of Britain at any time: Marcus Favonius Facilis, a centurion who came over in the invasion and died soon after. He was buried at Colchester and today his face stares out from his tombstone, the first lifelike representation of anyone in Britain. How did it feel to come to this island on campaign and end one’s life out here on the edge of the known world?

And what about Fortunata the slave girl, put up for sale in London for a princely sum? As I explored the evidence I came across all sorts of varied individuals from incompetent potters to the furtive buriers of treasure hoards in Roman Britain’s last days, and flamboyant soldiers to bereaved parents interning the remains of their beloved children. I think my favourite is the irritated centurion Emeritus in Bath who was forced to repair a small shrine after it had been vandalized by yobs. Careworn and frustrated, Emeritus vented his spleen on an altar he erected to commemorate the event and thus immortalized himself.

In almost all these cases our glimpses are fleeting, like photographs, and nothing like the density of a record such as the diary of Samuel Pepys. But they remain fascinating vignettes of life in the island we occupy today when once it formed part of the classical world. They share the phenomenally unlikely fact that any of us was born at all against all the odds. They are as much a part of Britain’s history as we are and we are lucky to have a record of some of them.

Guy de la Bedoyere is the author of Roman Britain: A New History and many other histories of Roman Britain widely admired for their accessibility and flair, including the popular volume The Romans for Dummies. He has also appeared regularly on the Channel 4 archaeological television series Time Team. 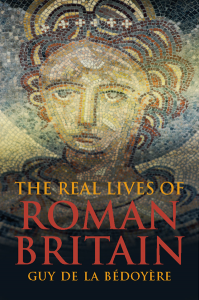 This month, we took a trip up to the Lake District to visit the Brantwood House Bookshop, our…