During the 16th and 17th centuries the courts of Deccan India were some of the most splendorous and widely admired in the world. Traders from far-reaching lands such as Turkey, Africa and Europe flocked to the area to see the magnificently rich material culture of the inhabitants. The art from this period is unique due to its diverse cultural influences, largely occurring through the movement of Asian Turks to this area after being displaced by the Mongol invasions in the previous centuries. These much-admired objects are the focal point of a new exhibition at the Metropolitan Museum of Art in New York and the beautifully illustrated accompanying catalogue.

Here are some exclusive spreads from Sultans of Deccan India, 1500-1700:

‘Sultans of Deccan India, 1500-1700: Opulence and Fantasy’ opens at the Metropolitan Museum of Art, New York on 20 April.

The accompanying catalogue is available here. 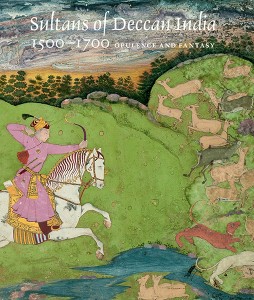 February’s Bookshop of the Month – The Feminist Bookshop

For February’s Bookshop of the Month, we’re heading down to the south coast to visit the Feminist Bookshop…