John Knox was the leader of the Protestant Revolution in Scotland during the 16th century. He was a complex and compelling individual, who had an undeniable impact on Scottish religion and society during his lifetime and the years that followed. Knox is the focus of a new biography by Jane Dawson, in which there is a considerable reevaluation of the Protestant’s character, focusing on new evidence that has only recently become available. To celebrate this new and exciting publication, Dawson explores the landmarks in the life and career of Knox that occurred during the spring month of April…

For John Knox, the Scottish, British and European Reformer, April frequently marked a new beginning in his life. Key transitions in his clerical career happened during that month which witnessed him becoming a Roman Catholic priest, a chaplain in the Church of England and a minister in the Scottish Reformed Kirk.

Knox’s clerical career started in Edinburgh in April 1536 with ordination as a Catholic priest by Bishop William Chisholm. Though it was common for the first generation of Protestant reformers to have served in the Catholic Church, Knox carefully avoided alluding to this fact. Subsequently, his Roman Catholic opponents delighted in annoying Knox by mentioning he was a priest. Though Knox had repudiated his episcopal ordination on becoming a Protestant, its existence prevented questions in April 1549 about his qualifications to serve as a Church of England cleric. He was first made an army chaplain to the garrison of Berwick-upon-Tweed and later became one of King Edward VI’s royal chaplains.

Two years earlier in April 1547 Knox had received the call to become a Protestant preacher that, for him, was the foundation of his future ministerial career. He was called by the Protestants besieged in St Andrews Castle and by the congregation of the local parish church. Although there was time for Knox’s first sermon, the Castle fell shortly afterwards and the preacher was bundled off to become a French galley slave.

In 1555 Knox faced a similar dramatic change of fortune after he had been dismissed from his ministry and thrown out of the city in the middle of the ‘Troubles at Frankfurt’ raging among the English exiles. That April he was feeling miserable, on the road without a job, and with treason charges hanging over his head. With the benefit of hindsight, we know Knox was heading for Geneva and the happiest period in his life. Safe in the city of John Calvin, he later became co-minister with Christopher Goodman to the English-speaking exiles. Now a husband and a father, Knox was part of a ‘dream team’ running an exceptional congregation.

Four years later Knox was at another turning point in his career. He had travelled from Geneva and in April 1559 was awaiting news from England whilst acting as a locum minister to the expanding group of French Protestants in Dieppe. Queen Elizabeth I, a few months into her reign, was furious with Knox’s tract The First Blast of the trumpet against the monstrous regiment of women and refused him permission to set foot on English soil. Consequently, Knox decided to find a ship bound for Leith. A year later in April 1560 the decision to return to Scotland seemed completely vindicated as Knox and the Protestant forces were close to victory in the Reformation Crisis. Knox was on his way to take up the permanent position of minister in Edinburgh at the heart of the kingdom’s political and religious life.

By April 1567 Mary, Queen of Scots, was in serious trouble after the murder of Darnley, her husband. Curiously, Knox was not in Edinburgh, nor even in Scotland, but travelling in England and keeping a low profile to avoid notice by Queen Elizabeth. He visited Chester to see his best friend Goodman and also went to London and visited members of their former exile congregation. Knox might have considered retirement but eventually accepted his duty was to continue to preach to ‘unthankful, yea alas miserable, Scotland’. And so Knox returned in the summer of 1567 and remained in Scotland until his death in November 1572.

During April we can see some of the highs and lows of Knox’s clerical career and his life. Opening the calendar window on this month reveals the very modern tensions between the public role and the private life of this man born 500 years ago. 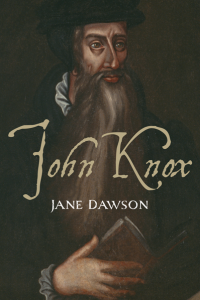 Bonsai: A Patient Art, published by Yale University Press, presents a collection of living Bonsai masterpieces from the…