Francis Barber lived a remarkable life. As far as we know he was born a slave on a sugar plantation in Jamaica in about 1742 before being sold and relocated to England in the 1750s. It was here that he became the manservant to the famous writer Samuel Johnson, and upon the writer’s death Barber was bequeathed a large chunk of his estate. Throughout his lifetime he became a highly educated and well-respected member of society. Barber’s story provides an insight into the perspective of one of many 18th-century black Britons, whose stories are all too frequently unaccounted for. To coincide with the 260th anniversary of Johnson’s dictionary and the release of The Fortunes of Francis Barber, the author of the publication, Michael Bundock, explores the historical significance of Barber’s life.

I first came across Francis Barber over twenty years ago, in the pages of James Boswell’s Life of Samuel Johnson. Although he is a minor figure in that major work, there seemed to me to be good reasons to want to know more about him.

Perhaps the starting point is the intriguing story of Barber’s life as a member of Johnson’s household of waifs and strays. Born a slave in Jamaica in about 1742 Barber was brought to England by his owner, Colonel Richard Bathurst, in 1750, and became a servant in the Gough Square home of Samuel Johnson, then a struggling writer. With one long interval, Barber remained in his service until Johnson’s death in 1784, when he inherited a large sum as Johnson’s residuary legatee. It is fascinating to observe the development and change in the relationship between the two men over time, especially after Barber’s marriage.

But there is more to Barber’s life than his relationship with Johnson. We can trace him through the world of work – his time working for one of London’s leading apothecaries, his service in the British navy during the Seven Years’ War, and his establishment of a school (possibly making him the first black schoolmaster in Britain). At a more personal level, it is also possible to learn about his relationships with those around him – not only the fact of Barber’s marriage to a white woman and the birth of their children, but also the reactions to those events of the people who knew the couple. We can see too how those Barber encountered from day to day treated him, ranging from the friendly support of James Boswell to the vicious hostility of Sir John Hawkins.

There is particular significance in Barber’s life from the perspective of black history and the history of slavery. What we know about black history during the period of slavery has increased dramatically in recent years. For eighteenth-century Britain, important books like Peter Fryer’s unsurpassed Staying Power: The History of Black People in Britain, and Gretchen Gerzina’s Black England: Life Before Emancipation have revealed much about the patterns of life and work of the black population at that time.

But for all that we know about the black community in general, the lives of individuals have remained frustratingly elusive. It is important to tell individual stories so far as we can, to try and catch the lived experience of that time. Vincent Carretta’s masterly biography of Olaudah Equiano, Equiano the African: Biography of a Self-Made Man, demonstrates what can be achieved. Yet in most cases the materials for such accounts simply do not exist.

Johnson’s fame makes it possible to tell Barber’s story. Barber is referred to in letters and diaries written by some of those in Johnson’s circle, and in published lives of Johnson and others. Because Johnson was a celebrity, Barber became something of a minor public figure, so I have been able to able to trace references to him in the press of the day.

There is a well-known painting by James E. Doyle, A Literary Party at Sir Joshua Reynolds’s (c. 1845), which has often been used to illustrate editions of Boswell’s Life of Johnson. It gives a good idea of the remarkable gathering of talents around Johnson – the party includes Oliver Goldsmith, James Boswell, Joshua Reynolds, Edmund Burke and David Garrick.

In the popular print of the picture the names of those portrayed appear at the bottom. But there is one figure who is not identified, a black servant who appears at the back of the room. It may be that Doyle intended this to represent Reynolds’s black servant. But it is also possible that he thought of the man as Francis Barber: an account published not long before Doyle painted the picture recorded that Barber did, on at least one occasion, serve at Reynolds’s house.

Doyle’s picture neatly encapsulates the state of our knowledge of black London – and indeed, of many Londoners – in the eighteenth century: each of the notables at the table has his biography, but even the identity of the black servant is a mystery. In The Fortunes of Francis Barber I have tried to bring one such servant a little further towards the foreground.

Michael Bundock is a director of Dr. Johnson’s House Trust and former editor of The New Rambler, the annual journal of the Johnson Society of London. He is the author of numerous essays and articles on Samuel Johnson, Francis Barber, and eighteenth-century history and literature.

The Fortunes of Francis Barber: The True Story of the Jamaican Slave Who Became Samuel Johnson’s Heir by Michael Bundock is available from Yale University Press. 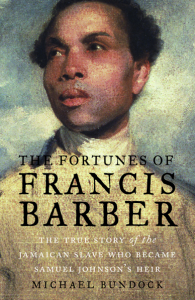 Prize news: ‘An Empire of Ice’ by Edward Larson is shortlisted for the 2012 Hessell-Tiltman award