It has been 70 years since the Nazi-led concentration and extermination camps were liberated by the allies. The atrocities that occurred during this dark chapter in history still shocks and resonates with many. Dan Stone, author of The Liberation of the Camps: The End of the Holocaust and its Aftermath, discusses the initial discovery of these horrific sites focusing on Buchenwald, the first camp to be found by US troops.

In November 1944, French and American troops entered the Natzweiler-Struthof camp high up in the Vosges Mountains, the beauty of its setting contrasting with the brutality of what had transpired there. It had been emptied of its inmates, who shortly before the soldiers arrived had been forcibly evacuated on what became known as a “death march”. At this point, although the Soviets had liberated Majdanek a few months earlier, this was the only concentration camp that had been liberated by the Western Allies and it was reported as an aberration. It is not entirely clear why this was the case; although there was widespread and justifiable distrust of Soviet journalism, knowledge of Nazi concentration camps had been widely disseminated since 1933. Reports in the press and testimonies of inmates had generated a good deal of discussion before the war and during it there was condemnation of Nazi criminality. Nevertheless, it did not take long before Allied soldiers and the public in Western Europe and the US had to confront the awful truth: Natzweiler was but one component of a vast camp system that spread across the whole of Nazi Germany and occupied Europe. And what took place in the camps went far beyond what anyone had imagined.

After months of gruelling fighting, the eastward advance of the Western Allies led them to many more camp sites and an understanding that Naztweiler was no one-off. On 4 April 1945, American troops entered Ohrdruf, a sub-camp of Buchenwald. They found no one alive there, as one soldier, Mayer Birnbaum, recalled:

‘I was totally unprepared for what we found in Ohrdruf. I had heard of concentration camps, of course, but until the moment when we entered Ohrdruf and found the bodies strewn all about, I imagined them to be giant work camps employing slave labour – three meals a day and a bed at night in exchange for unpaid labour.’

A few days later, on 11 April, US troops arrived at the main camp itself. By contrast with Ohrdruf, at Buchenwald they discovered more than 20,000 inmates still in the camp. The liberating soldiers of the 80th Infantry Division were horrified to see “human skeletons” and could barely comprehend what they were looking at. Harry Herder, for example, said:

‘None of us, no one in our company, even amongst those who had been the originals, was prepared for what we were now surrounded by. It was not “human”. It did not seem real. But it was all too real, it was the only life that some of the prisoners had known for years. Maybe it was all too human. Maybe this is what we are.’

A steady stream of journalists, photographers, politicians and locals forced to tour the camp were soon able to ponder this question for themselves.

Buchenwald was remembered during the life of the German Democratic Republic as one of the great sites of wartime antifascism, where the Camp Committee, an underground Communist organisation, had led the inmates in a process of “self-liberation” against Nazi rule. The film Naked Among Wolves fixed this idea in the East German imagination. But the reality was somewhat different: although the Camp Committee did collect weapons at great risk to themselves, its takeover of the camp occurred at the very last minute as the Americans were approaching and the SS fled. Still, the organising skills of the Camp Committee ensured that some order was maintained in the camp. The day after the liberation, they organised a “Freedom Roll Call”, at which inmates from different nations represented in the camp marched past and sang their national anthems, and were then addressed their by leading figures from within the camp and an American lieutenant. The event was referred to by two American authors of the first post-liberation report as “an incredible experience”.

The celebrations neither could nor tried to conceal the devastation that had been wrought at Buchenwald. Especially in the “Little Camp”, a kind of camp within a camp where the worst suffering inmates were held, the liberators discovered terrible scenes. Faced with the “children’s camp”, which held about 850 children on liberation, Captain Melvin Rappaport described the inmates as “starving and hungry and cold miserable” and went on: “It was like a pack of wild beasts, just running around this enclave in there. They looked at me, and I was looking at them. I didn’t know what to say. It was unbelievable.” And American journalist Percy Knauth, author of one of the first and still most compelling accounts of the camps explained how visiting the camp had vitiated his senses:

‘I had never seen death before – I had been close to it, but somehow its stunning fact had always passed me by. Numbly, I saw death now, and before I left the camp that evening I saw it reduced to such ordinariness that it left me feeling nothing, not even sickness at my stomach.’

A British parliamentary delegation, invited by Eisenhower to view conditions at the camp, responded with mandarin understatement which just about contained the anger and upset the authors felt: “such camps” as Buchenwald, they wrote, “mark the lowest point of degradation to which humanity has yet descended. The memory of what we saw and heard at Buchenwald will haunt us ineffaceably for many years.”

This groping for an adequate vocabulary at Buchenwald would soon become a familiar problem, as further horrors were uncovered at Bergen-Belsen, Dachau, Ravensbrück, Mauthausen, Gross-Rosen and Theresienstadt. By the middle of May it was clear that Natzweiler had in fact been merely an introduction to Nazi evil. The liberation of Buchenwald marked the moment that the world’s eyes were opened to the scale of the Third Reich’s crimes. More was not long in coming. 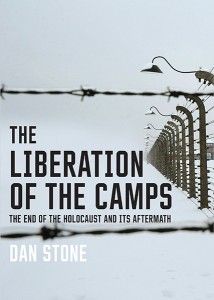 Adam Phillips’ Becoming Freud is a biography that explores the life of the young Freud, spanning his first fifty years,…