Merging the worlds of architecture, art, and design in a unique way, David Adjaye is very much in the spotlight these days. The African-born, London-based starchitect seems to be everywhere lately. His work, and that of his firm, David Adjaye Associates,

is currently the subject of a major museum retrospective, “Form, Heft, Material,” spanning the past two decades. Co-organized by curators Okwui Enwezor, Zoë Ryan and John H. Bryan, the exhibition is on view at the Haus der Kunst in Munich, Germany, through June 28, before traveling to the Art Institute of Chicago, where it appears September 19, 2015, through January 3, 2016.

“Arena,” a theater structure Adjaye designed for this year’s Venice Biennale, debuts in May. And one of the most anticipated building projects in the U.S., Adjaye’s $500-million National Museum of African American History and Culture building, currently under construction at the Washington, D.C., Mall, near the White House, is set to open in 2016. 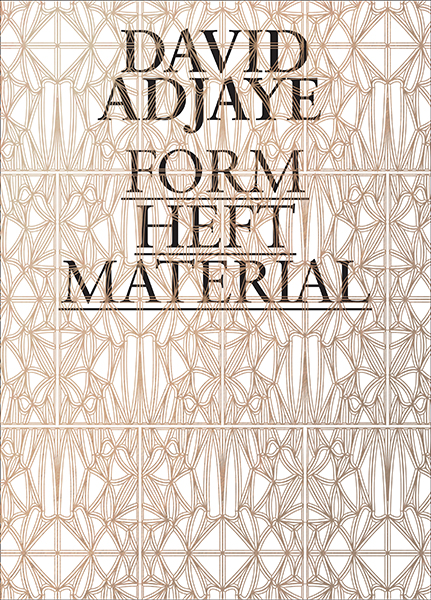 Born in Dar es Salaam, Tanzania, in 1966, the son of a Ghanaian diplomat, Adjaye traveled extensively at a young age before his family settled in Britain when he was thirteen. He eventually studied art, architecture and design at London’s Royal College of Art, graduating in 1993. After working briefly for a number of architects, including David Chipperfield, and Eduardo de Moura, Adjaye co-founded a design company with a team of partners, before establishing his own firm, Adjaye Associates, in 2000.

Around that time, Adjaye embarked on a decade-long project to visit all of the capitals of Africa, studying the continent’s colonial architecture as well as African modernism. He outlines this fascinating endeavor in his essay, “The Lesson of Africa,” in Form, Heft, Material, which accompanies the current museum retrospective.

Throughout these years, Adjaye also collaborated with high-profile artists and designers, such as Alexander McQueen, Jake Chapman, Juergen Teller, and Chris Ofili, designing their homes and studios. Adjaye has worked especially closely with Ofili, designing for the Turner Prize-winning artist a number of his exhibitions. Most famous among them is his installation design for the British Pavilion at the Venice Biennale, in 2003, when Ofili represented Great Britain.

Adjaye has gained an international reputation for an exciting merger of modernist lines and design elements that tap into his African heritage. In his essay for Form, Heft, Material, Enwezor characterizes Asjaye’s use of spatial relationships as “postcolonial realism.” He explains that in his work, “Adjaye has had to clarify how aesthetic references derived especially from the meshing of modern architectural discourse and the idioms of African abstraction can infuse the formal and material language of his buildings with new vitality.”

In a recent email exchange, Adjaye shared with me his thoughts about his current retrospective, as well as his aims and achievements past and present.

David Ebony Congratulations on “Form, Heft, Material,” which recently opened at the Haus der Kunst in Munich. I’m looking forward to seeing it in Chicago in the fall. How closely involved were you in the show?

David Adjaye I was involved in all aspects of the show. The structure of the exhibition, which is reflected in the portfolio sections of the catalog, is the result of lengthy discussions with the Haus der Kunst curators, Okwui Enwezor and Zoë Ryan. Their experience was invaluable in understanding how best to present the work in a gallery context.

Ebony What are your thoughts about the exhibition? How well does it represent your work?

Adjaye Although the Smithsonian building [the National Museum of African American History and Culture] was the pretext for the exhibition, I was interested in showing the broad development of our practice, how it has evolved, and its current trajectory. Our office is set up to engage with a range of situations at a variety of scales. This is the first time that we have shown the full range of our output.

Ebony The design of Form Heft Material, the book, with its lattice patterning on four sides, and gold and black type on colorful toned paper inside, is quite striking. How did that design evolve?

Adjaye We met regularly with Mode, the [London-based] designers of the catalog, who were interested in exploring how the materiality of a publication could reflect our architectural concerns. The essays are each printed on a different colored paper in order to suggest the geographies we work with. The bronze lattice on the cover is based on the outer facade of the Smithsonian building.

Ebony There is certainly a great deal of anticipation in the U.S. for the Smithsonian’s National Museum of African American History and Culture, a monumental project, which you designed for Washington D.C., and is currently under construction. In your essay for Form, Heft, Material, you mention that you began the project in Washington after a prolonged study of architecture in Africa, including colonial-era buildings. You wrote, “I think my knowledge of the tropics informed my understanding of its context. As in colonial cities, the central composition of the American capital was constructed in a relatively short period of time, which gives it a powerful singularity.” Can you elaborate on your concept for this important building?

Adjaye I could identify with the architecture of the National Mall because it is clear in outline and rich in detail. This was an important consideration on our site, which completes a very powerful composition and is related in detail to a diversity of national monuments and symbolic spaces. The foursquare appearance of our building is a response to its position, ending the sequence of buildings on the north side of the Mall, and turning the corner toward the White House. Other aspects of the design, such as the South Porch and the latticework corona, engage with the immediate context.

Ebony How do you think your African background and heritage informed the design for the museum?

Adjaye The crown-like form of the museum’s superstructure was inspired by a carved wood figure by the Yoruba sculptor Olowe of Ise [ca. 1875-ca. 1938]. I have a long-term interest in African art.

Ebony Can you comment briefly on your own, personal feelings about African-American culture? I am especially wondering about how that might have evolved from when you were young and first aware of it, until more recent experiences, having spent more time in the United States.

Adjaye My first experiences of different cultures had to do with my parents, moving around Africa when I was a child. I became more aware of African-American culture after we settled in London, when I was thirteen. But my decisive encounter was reading The Black Atlantic, Paul Gilroy’s book in which he discusses the three-way exchange among Africa, the Americas, and Europe.

Ebony Your art-world collaborations are of special interest to me, particularly your work with Chris Ofili. I thought his retrospective at the New Museum was one of the best art exhibitions I saw in New York, or anywhere else last year. How did you meet? Were you already involved in the London art scene, or did he introduce you to other artists you subsequently worked with, Noble and Webster, Alexander McQueen and others?

Adjaye I met Chris Ofili, and several other artists with whom I have since collaborated, when we were postgraduate students at the Royal College of Art in London. I had completed an art foundation course before I studied architecture; and out of interest I used to attend the theory of art lectures for the fine art students at the College.

Ebony Okwui Enwezor, the curator of this year’s Venice Biennale, opening this May, and also the co-curator of your current show, came to New York last week to discuss the Biennale with members of the press. He talked at length about “Arena,” the theater space that you are constructing within the Biennale. He showed some of your renderings for it. Can you say a bit about the project and its relationship to the rest of Biennale?

Adjaye The Arena is a gathering space that will be located in the Central Pavilion in the Giardini. We designed it as a multi-directional viewing chamber that will encourage dialog and redress the historic under-representation of performance art. It will accommodate some of the main thematic events during the Biennale, such as the live reading of Karl Marx’s Das Kapital. We are also doing the exhibition architecture at the Arsenale.

Ebony Your design esthetic basically seems to draw inspiration from the classic modernist tradition. That is not to say it is traditional. But an important attribute of your work might be described as something almost classically austere. Would you agree with that assessment?

Adjaye Our buildings are not meant to be austere. Many of them are celebratory, and I hope they are recognizable for what they have to offer. Modern architecture was intended to suggest a new beginning but one borrowed from the classical tradition, especially when it came to the scale and proportions of public buildings. Similar precedents exist in other types of historic architecture.

Ebony I guess what I am curious to know is if you dismiss the idiosyncrasies of post-modernism? Maybe I am asking this question because tomorrow I am planning a visit to Grounds for Sculpture, in New Jersey, to see the Michael Graves survey, which has suddenly become a memorial exhibition. What are your thoughts about post-modernism and more recent trends? Also, are there any of your design or architect peers whose works you admire?

Adjaye My experience of post-modernist architecture was heavily filtered by the architectural culture in London when I was a student, and at the time I opened my first office in the 1990s. We were especially influenced by 9H, the name of both a journal and a gallery, which promoted the work of lesser-known modernists and the new work that was then coming out of Europe. In terms of current trends, I was involved in the short films on the floating architecture of Kunlé Adeyemi in Lagos, and the bamboo architecture of Vo Trong Nghia in Vietnam, in the CNN “Ones to Watch” series.

Ebony Finally, what would say has been your most successful completed project to date, and why?

Adjaye Part of my method is to work in series, in which the characteristics of one project are significant in how they contribute to the development of other projects. Because this way of working is second nature to me, it is difficult to single out specific projects. When completed, the Smithsonian building will certainly have a special place in the work, in that it brings together many of my preoccupations in a highly significant location. 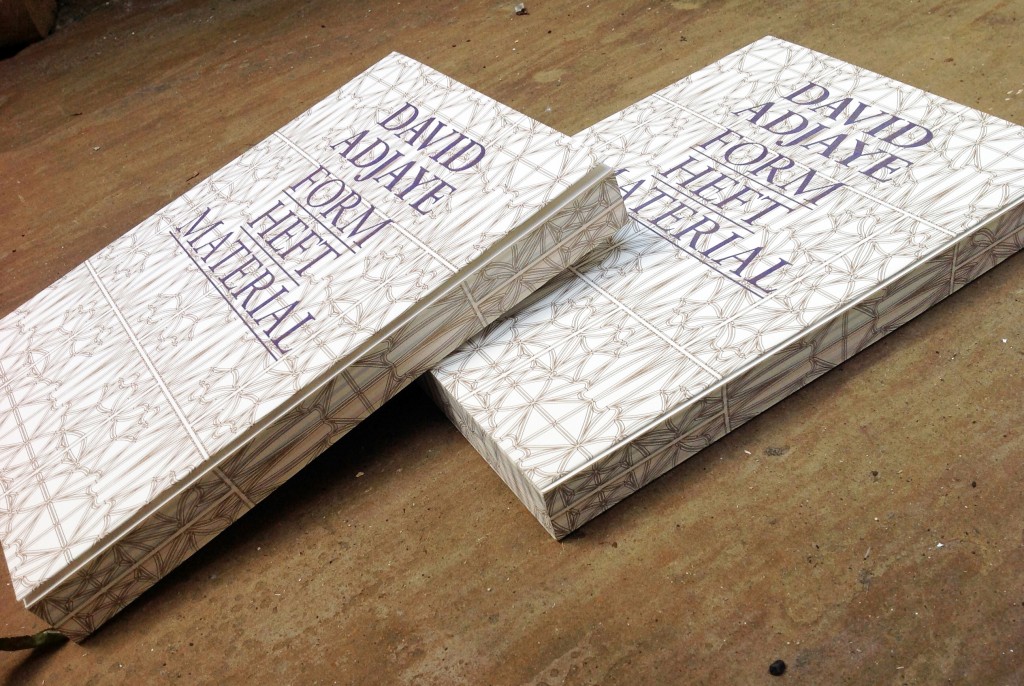