Béla Bartók is widely acknowledged as one of the most important musical composers of the early 20th century. He is considered to be one of the founders of ethnomusicology and through the diverse cultural influences that characterise his work, can be seen as an important bridge between the musical styles of the 19th and 20th centuries. David Cooper, author of a new deeply researched biography of the composer explores his unique style, cross-cultural influences and career in a piece for the YaleBooks blog.

On 25 March 1881, the headmaster of an agricultural school in Nagyszentmiklós (Great St Nicholas), a small town that lay on the south eastern border of Hungary, and his wife, a piano teacher of German extraction, welcomed their first-born child into the world. That boy, called Béla after his father, was born in the periphery of the Austro-Hungarian Empire and grew up in a cultural and ethnic melting pot that included Magyars, Romanians, Serbians and Germans as substantial elements of the local population.

This early experience of racial diversity, a very common one in Hungary, would have a significant influence on the young man as he matured into an adult and developed as a musician. He was initially attracted by the populist nationalist movement that sought independence from Austria and espoused a Hungarian state and culture. The tunes in the repertoire of Gypsy musicians were widely seen to represent Magyar values in musical terms and indeed, Franz Liszt had ensured their broader currency by incorporating a number of them in his Hungarian Rhapsodies. It was to the melodies of these magyar nóta – Hungarian popular songs – that Bartók originally turned.

A notable early outcome of this political enthusiasm was his symphonic poem Kossuth, which, in the manner of Richard Strauss, musically depicted the hero of the 1848 revolution. Completed soon after Bartók’s graduation from the Royal National Hungarian Academy of Music, it launched his career as a radical new voice. It also brought him to England to attend a performance of the piece by the Hallé Orchestra in Manchester directed by the Hungarian-born conductor Hans Richter.

And so might have begun the career of a ‘conventional’ nationalist composer in the mould of figures such as Dvořák (whose 6th Symphony was premiered in Prague on the day of Bartók’s birth) and Mussorgsky (who died on 28 March 1881, three days later). But almost as soon as Bartók had established himself on the concert stage as a composer and pianist he took a far-reaching turn away from the conventional models. As a result of coming into contact with Zoltán Kodály, he embarked from 1905 on what would become a lifetime study of the traditional music of the countryside of Eastern Europe and North Africa. This commenced in Hungary, but continued through Romania, Slovakia, Algeria, Turkey, and in the final years of his life, Yugoslavia.

The discoveries he made through the collection, transcription and analysis of folk music, which placed him as one of the founding fathers of ethnomusicology, helped to transform his musical language from that of the late nineteenth century to a radical new approach that spoke more directly to the twentieth century. These melodies were very different from the urban popular music of Hungary, and seemed to him to point back to antiquity, offering insight into the cultural development of the Magyar race.

His own musical career would progress along four branches, as concert pianist, piano teacher, composer and ethnomusicologist and these would intertwine like vines, mutually supportive of each other and interdependent. From these branches flowered a series of widely acknowledged masterpieces which include: six string quartets; the opera Bluebeard’s Castle; the ballets The Wooden Prince and The Miraculous Mandarin; two violin sonatas; three piano concertos; the Second Violin Concerto; Music for Strings, Percussion and Celesta; the Sonata for Two Pianos and Percussion; the Concerto for Orchestra; and the Sonata for Solo Violin.

Despite his successes however, he remained a man of great humility and simplicity who disliked the attention that celebrity and notoriety conferred. In his youth a staunch proponent of Nietzsche, it might be said that he tried to live his life (though by no means always successfully) in the spirit advocated by the German philosopher in aphorism 34 from Human, All Too Human, which he summarised in a letter to a female friend in 1905 as ‘Each must strive to rise above all; nothing must touch him; he must be completely independent, completely indifferent. Only thus can he reconcile himself to death and the meaninglessness of life.’

The final years of Bartók’s life were spent in New York, half a world away from his home in Budapest. Despite serious illness that curtailed his performance as a pianist, significant financial problems, and despair engendered by war, he enjoyed a late flourishing of his compositional output, including the great Concerto for Orchestra that has become a mainstay of the orchestral repertoire. In this work Bartók absorbed and coalesced the multiple ethnic traditions that he had come into contact with throughout his life and moved through expressions of lament, detachment and irony to eventual celebration.

In this seventieth anniversary year of Bartók’s death, he remains one of the most significant composers of the twentieth century for concert audiences, performers and academics alike. His heritage can be found not only in art music, where many contemporary composers continue to cite his influence, but also in traditional music, where his contribution played an important role in stimulating the enormous upsurge in interest in the genre.

You can find more images of Béla Bartók here.

David Cooper is professor of music and technology, and dean of the Faculty of Performance, Visual Arts and Communications, University of Leeds. His publications include Bela Bartok: Concerto for Orchestra and numerous chapters and articles on aspects of Bartok’s life and works.

Béla Bartók by David Cooper is available now from Yale. 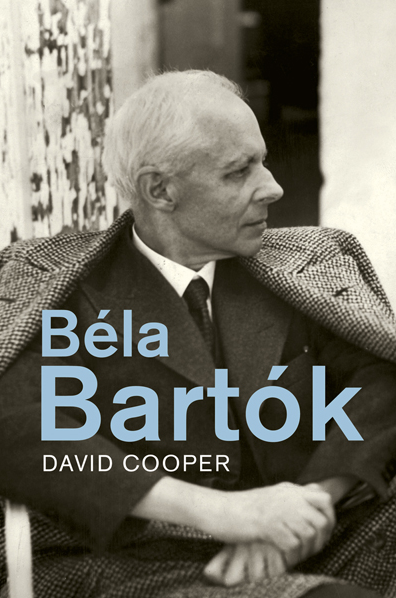