World Poetry Day, on 21 March, is an event organised by the United Nations to ‘recognise the unique ability of poetry to capture the creative spirit of the human mind’. Founded in 1919, the Yale Younger Poets prize is the oldest annual literary award in the United States and has been championing new emerging talents in the world of poetry for nearly 100 years. Many recipients of the award have gone on to have long and successful careers; past winners have included Adrienne Rich, who has been called ‘one of the most widely read and influential poets of the second half of the 20th century’ and William Meredith who was Poet Laureate Consultant to the Library of Congress in the late 1970s. Other notable past winners include Muriel Rukeyser, W. S. Merwin, John Ashbery, John Hollander, James Tate and Carolyn Forché.

In 2011 Carl Phillips was selected as the new judge for the prize, replacing Louise Glück who was in the role from 2003-2010. Phillips teaches English and African/Afro-American Studies at Washington University in Saint Louis, he has won many literary awards himself and written numerous books of poetry.

Ansel Elkins is the latest in this long line of prize-winning poets to be published by Yale. Her collection entitled Blue Yodel, available in May 2015, will be the 109th volume in the Yale Younger Poets series. Elkins has also recently been awarded a fellowship from the National Endowment for the Arts and a residency in New York organised by the Paris Review. Prize judge Carl Phillips described Elkins’ poems as ‘razor-edged in their intelligence, Southern Gothic in their sensibility’, also praising her for an ‘arresting use of persona’. The poet’s work focuses on people who are marginalised by society and consists of various characters of ‘otherness’. She also draws on her own personal experience as the daughter of two journalists growing up in rural Alabama. Elkins’ poems are both imaginative and haunting, telling the tale of those who are isolated in a raw, primal and compelling manner.

Noah Warren has just been named the 2015 winner, selected for his manuscript, The Destroyer in the Glass, due to be published by Yale in April 2016. Phillips said of Warren’s work: ‘The Destroyer in the Glass impresses at once with its wedding of intellect, heart, sly humor, and formal dexterity, all in the service of negotiating those moments when an impulse toward communion with others competes with an instinct for a more isolated self. The poems both examine and embody the nexus of joy and sorrow, of certainty and confusion, without which there’d be none of the restlessness that makes us uniquely human. Warren’s vision is a generous one indeed – and itself a gift.’ Warren has studied at Yale University and Phillips Academy. He was recently awarded the Frederick Mortimer Clapp Fellowship.

Both Elkins and Warren will receive one of the five writing fellowships offered at the James Merrill House in Stonington, Connecticut, as Yale continue their partnership with The James Merrill House programme. The fellowship provides a furnished living space and daily access to James Merrill’s apartment for a writer in search of a quiet setting to complete a project of literary or academic merit.

Yale is proud to publish the Yale Series of Younger Poets. Blue Yodel is due to be published May 2015. 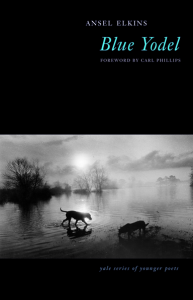