Thomas Cromwell is a historic figure known to many. Between 1532 and 1540 he was the chief minster to Henry VIII, during which he held an instrumental role in ensuring the English Reformation and the king’s marriage to Anne Boleyn. Cromwell has enjoyed a certain resurgence of interest recently, largely down to his portrayal in Hilary Mantel’s historic novels Wolf Hall and Bringing Up the Bodies, both of which were adapted into a successful BBC series. Cromwell’s career is the focus of a new book The Rise of Thomas Cromwell: Power and Politics in the Reign of Henry VIII by Michael Everett. To mark the release of this publication, Yale presents an excerpt from The Rise of Thomas Cromwell that explores the chief minister’s involvement in establishing the Treason Act of 1534, a crime under which he would later be executed…

The Rise of Thomas Cromwell: Power and Politics in the Reign of Henry VIII

It was once thought that the earliest version of the government’s treason legislation, prepared towards the end of 1530 for the parliamentary session in early 1531, was corrected by Cromwell. Examination of the drafts, however, reveals that Elton was correct to argue that these alterations are in the hand of Thomas Audeley, not Cromwell, and were probably made in the Michaelmas term of 1531, when both he and Cromwell began to work on the earlier legislation following instructions from the king. The changes made at this stage were hardly innovative, and for some unknown reason the legislation was not brought before parliament. The first hints at an intent to extend treason explicitly to cover words did not emerge until the drafting stage of the bill of succession in early 1534. One of Cromwell’s memoranda concerns discussions he had held with the king’s legal counsel over this act. It reveals that, with regards to the ‘woord wrytyng or dede’, these legal experts ‘be contentyd that woord dede & writing shalbe treson And woorde to be mysprisyon’. This is significant because it suggests that words constituting treason was something that Henry’s senior legal advisers had initially rejected; and the succession act of March 1534 indeed laid out that verbal attacks on the king were only ‘mesprision of treason’ and punishable by imprisonment and the loss of possessions.

The treason act of 1534 was passed only months after this, but now declared that anyone who ‘malicyously’ spoke ill of the king and queen, their heirs, or called Henry a ‘heretyke scismatike Tiraunt ynfidell or Usurper of the Crowne’ was guilty of high treason, punishable by death. Cromwell was put forward by Elton as the person who had proposed extending the definition of treason to include the spoken word, but the evidence for this is far from convincing, and largely rests on a slip of Cromwell’s pen. It is far from clear whether one individual was responsible for this particular element of the act, and it would be more reasonable to attribute these changes to a continuing dialogue between the king and his legal advisers. Cromwell was certainly closely involved, and corrected parts of the various treason bills drafted between 1531 and 1534. But even a cursory glance at the surviving drafts makes it plain that the hand of Thomas Audeley is far more evident on those prepared in late 1533, when words were declared treason. It was Audeley, for instance, who removed a phrase which would have made it treason to have spoken words that caused ‘derogacion of the kinges honor’ or that might have brought the royal personages ‘in hatered or euyll opynyon’, when the legislation was returned to in late 1533. Audeley replaced this with a clause making words deemed dangerous to the unity of the realm, misprision of treason, if they were not already classed by the act as treason. This clause was later dropped, but such detailed legal amendments highlight that Cromwell made only a single and extremely minor alteration, moving the date on which the 1533 legislation would become active to ‘January next ensuying’. Cromwell’s most notable alterations were to the earlier drafts prepared in late 1531 and early 1532. His most significant contribution seems to have been the removal of a passage from the aborted 1532 bill which offered a reward to informers. This had been suggested by the king, but was clearly impractical in that it almost invited false accusations. Despite Elton’s assertions, therefore, the strong likelihood is that Cromwell actually played very little part in formulating the treason legislation in 1533, when the crucial changes were made. Instead, it was Thomas Audeley, a man who had received formal legal training, who seems to have played a far more significant role in drafting the legislation. Perhaps a likely explanation of events is that during 1531 and 1532 Cromwell and Audeley were working on this legislation together, which explains why Cromwell’s hand is to be found more copiously on the earlier drafts. The legislation was then returned to in mid- to late 1533, by which time Cromwell was undeniably established as Henry’s chief minister. In this role he probably had less time to attend to the technicalities of drafting an act, and left it to the more legally minded Audeley. These considerations show that apportioning sole responsibility for the act is unrealistic: both men must have shared it – along, perhaps, with the king.

Michael Everett gained a PhD at the University of Southampton where he is now a visiting fellow. He currently works at the House of Commons, London. 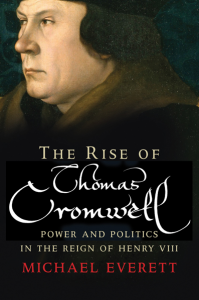 The Rise of Thomas Cromwell: Power and Politics in the Reign of Henry VIII by Michael Everett is available now from Yale.

The National Gallery’s ‘Leonardo da Vinci: Painter at the Court of Milan’ opens this week, and is the…