David Turner, author of The Old Boys: The Decline and Rise of the Public School, examines the controversial issues of education and class in British politics for the YaleBooks blog. What ensues is a debate around merit, diversity and a PR disaster involving pasties …

A general election is fast approaching, and pundits’ minds are concentrated, once again, more on the social backgrounds of politicians than on the minutiae of their policies.

A report by The Sutton Trust, the education charity, has revealed that 31 percent of the MPs likely to enter the House of Commons after the May vote attended private school, compared to 7 percent for the population as a whole. The Trust asserts that this is bad for the “diversity of experience” within parliament. Other critics of private school over-representation make the related point that ex-private school politicians tend to be “out of touch”.

The example of social ignorance which critics most commonly cite is the notorious pasty scandal of 2012. George Osborne, chancellor of the exchequer and old boy of St Paul’s, the London private school, decided in that year’s Budget to impose value-added tax at 20 per cent on the heated pasty, an iconic snack of the working classes.

‘It is a dangerous mistake to assume that, because they went to public school, politicians are always trapped into a narrow arc of behaviour that prevents any sympathy with other classes.’

Now, at last, commentators could point to a specific issue that appeared to show that the Old Etonian Cameron, his ally Osborne and the rest of their clique were out of touch – how could they not know how important pasties were to the proletarian diet? Most articles on the subject referred to their public school origins as proof of this otherworldliness.

The pasty issue was a PR mistake, but not a policy error. Nor was it a failure of imagination, caused by his social and school background. Osborne was, in fact, rationally closing a tax loophole – why should heated pasties benefit from a lower tax rate than other takeaway food? He could not be blamed for thinking it was right to tidy up a policy anomaly; he could only blamed for failing to understand that the press would take more interest in his school than in his policies. It was not he who was narrow-minded; it was the media that was.

It is a dangerous mistake to assume that, because they went to public school, politicians are always trapped into a narrow arc of behaviour that prevents any sympathy with other classes. For example, the intellectual architect of the welfare state, William Beveridge, had been educated at Charterhouse, the Surrey private school. The premier who put his ideas into practice, Clement Attlee, had been at Haileybury, a Hertfordshire private school. Attlee had developed an intimate knowledge of working-class life while head of his school’s East End mission.

It doesn’t seem, in any case, that most of the public cares much about the early life of politicians. As is so often the way, the general public are wiser than the pundits who profess to speak on their behalf.

The most flagrant case of this disconnection between what the public thinks about class and what politicians think it thinks was in 2008, when the local Labour candidate tried to win the Crewe and Nantwich by-election by criticising the “Tory toff” background of Conservative candidate Edward Timpson, an old boy of the private school Uppingham. Men were dressed up in top hats and tails to make the screamingly unsubtle point. The campaign went down like the proverbial lead balloon: the Conservatives won their first by-election victory in 26 years, with a massive 17.6 percent swing. It was an unusually ill-judged campaign, given that the Timpson family company, which mends shoes and cuts keys, is a model employer that ignores standard management hierarchies. It delegates responsibility to its workforce, appears near the top in surveys of the best employers to work for, and open-mindedly hires ex-offenders.

I’m not worried at all about large numbers of ex-private school children becoming powerful politicians – let the thousands of private school alumni who aspire for a candidacy compete for it, and the best of them will win on merit. What worries me instead is the destruction of meritocracy that is unleashed when families manage to form political dynasties – whether the Bushes in the US, the Abe-Kishi clan in Japan or the Dunwoodys in Britain. The Dunwoodys? Sorry, I forgot that this political clan seems to have died out – Tamsin Dunwoody, daughter of the previous Crewe and Nantwich Labour MP Gwyneth, lost the seat to Edward Timpson.

David Turner is the former education correspondent for the Financial Times and a London-based journalist who has worked for Reuters. His latest book, The Old Boys: The Decline and Rise of the Public School, is available in March. 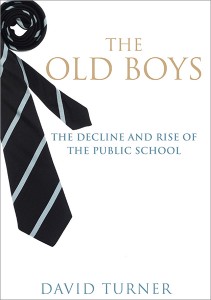 For more on our current affairs and history books, please subscribe to our eNewsletter here.

The Gothic Revival movement in architecture was intimately entwined with eighteenth and nineteenth century British cultural politics. By…