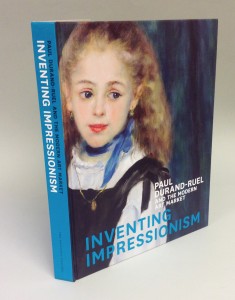 No figure, aside from the artists themselves, had such a profound and significant impact on Impressionism than Paul Durand-Ruel (1831-1922). Despite now being one of the most loved artistic movements of all time, Impressionism was regularly met with great hostility in the late nineteenth century. As one of the few art dealers that championed the Impressionists, Durand-Ruel played a key role establishing the careers of artists such as Claude Monet, Edouard Manet and Edgar Degas. During his long and fruitful working life Durand-Ruel developed what we now consider the modern art market, revolutionising the ways in which art was bought and sold and introducing innovative new principles. The art dealer purchased and sold over 12,000 Impressionist artworks and opened up branches of his Paris gallery all over the world. Paul Durand-Ruel and his collection are the focus of Inventing Impressionism, a new exhibition at the National Gallery, London. The show is accompanied by a lavishly illustrated catalogue, available in hardback from Yale.

The story begins in 1855 when Durand-Ruel visited the Exposition Universelle in Paris, where he was particularly enamoured with the work of Eugene Delacroix, who had over 30 pieces on display. It was this show that marked the turning point in Durand-Ruel’s artistic taste, determining his future as an art dealer once and for all. He later stated in his memoir that the exhibition constituted an unprecedented ‘triumph of modern art over academic’. It was soon after this that Durand-Ruel began to regularly purchase artworks from contemporary French artists. He made a habit of reserving pieces that were displayed at the Salon, especially if they had generated much discussion or received a medal. From early on in his career the art dealer was aware of the impact that publicity and exhibitions could have on the success of an artist and artworks.

Some spreads from Inventing Impressionism: Paul Durand-Ruel and the Modern Art Market

It was not until the early 1870s that Durand-Ruel became associated with the Impressionist movement. Charles-François Daubigny, painter of the Barbizon school, introduced the art dealer to Monet and Camille Pissarro during a trip to London in 1871. Durand-Ruel immediately purchased pieces by both artists, which were included in his first exhibition. Pissarro later commented on the incident stating ‘without him we would have died of hunger in London’. Upon his return to Paris later on that year the art dealer’s wife died from pneumonia. Widowed at the age of 40, Durand-Ruel became increasingly devoted and committed to the Impressionists. Over the course of the next two years the art dealer became familiar with Monet and Pissarro’s inner circle, meeting and purchasing the work of Degas, Renoir, Boudin and Morisot. This early bullishness was not to last, ‘myself, guilty of having exhibited and daring to champion such works, I was treated as a madman and a person of bad faith’. Narrowly avoiding bankruptcy, the late 1870s were a period of financial turmoil for Durand-Ruel, he was forced to sell artworks by the Barbizon school he had collected earlier in his career. The art dealer’s devotion to the new school of Impressionism was not shared by many, and the early 1880s did not show much financial promise either.

These challenges, however, did not hinder Durand-Ruel’s enthusiasm for the movement, and hope came in 1885 when a representative from the American Art Association showed an interest in his collection. Durand-Ruel was invited to bring 300 paintings over to New York for an exhibition there, an offer that he accepted despite the scepticism of some artists such as Monet, who was not pleased about his pictures ‘[leaving] the country for the land of the Yankees’. The exhibition opened in spring 1886 and it was here that the Impressionists finally received the warm reception and praise they deserved. Durand-Ruel noted how the show ‘triggered no fuss or stupid comments and sparked no protest. Press coverage was unanimously favourable and many articles of praise appeared in all the papers in New York’. The show was so successful that it was followed by another exhibition also in 1886, although not exclusively Impressionist, the artists still featured heavily. In 1888 Durand-Ruel opened a gallery in the city, aware that his much-needed financial success was due to the receptive American art market. In the following decades the Europeans became more open minded to Impressionism, with popular exhibitions during the 1890s and 1900s, notably the show at the Grafton Galleries, London, which displayed over 300 words by Cézanne, Monet, Pissarro and others.

Durand-Ruel revolutionised the art world, not only by championing the work of the then under-appreciated Impressionists, who would go on to influence some of the major twentieth-century avant-garde, but also by introducing new principles to art dealership, many of which are still used today. These innovations include ‘the exclusivity of the artists’ work; the founding of art reviews; the marriage of the worlds of art and finance; the staging of solo rather than group exhibitions; a network of international galleries; and a regular unrestricted access to his galleries and exhibitions.’ It would be hard to imagine an art world without any of these, whether it is the international Guggenheim museums in New York, Venice, Bilbao, Berlin, and Abu Dhabi or blockbuster exhibitions for individual artists. The great gamble that Durand-Ruel took with the Impressionists promoted the movement both sides of the atlantic and has had a lasting impact – transforming the nineteenth-century art market into the commercial art world we know today.

Inventing Impressionism is showing at the National Gallery, London, from 4 March – 31 May 2015.
The accompanying catalogue is now available in hardback from Yale.

For more books on Impressionism, please visit our website here.

‘Under the Banyan Tree: Relocating the Picturesque in British India’ by Romita Ray