The early 1500s lay claim to some of the most impressive and important artists in history, with giants such as Leonardo da Vinci and Michelangelo Buonarroti adorning Italy with their statues, frescos and architecture. Perhaps most famously, da Vinci’s Mona Lisa and The Vitruvian Man, and Michelangelo’s ceiling of the Sistine Chapel demonstrate examples of High Renaissance art which have  influenced and changed the way people conceive of the ‘figure’. This extract from Leonardo, Michelangelo, and the Figure by Michael Cole describes the similarity in each painters’ work, evaluating the 1504 and 1505 commission which brought the two together: the murals for Florence’s City Hall. Leonardo was to depict a historic battle between Florence and Milan, Michelangelo one between Florence and Pisa.

When Leonardo Met Michelangelo
Chapter 1: The Force of Art – extract

Leonardo and Michelangelo were almost certainly expected not only to look at historical sources but also to accommodate their paintings to the functions of the room. One of these was to display captured standards, including those from Anghiari. Another was to host council meetings, with Soderini, whose title was Gonfaloniere (“standard-bearer”) of the Republic, presiding. It seems likely that standards would have featured prominently in all the room’s decorations: the “Cristo Salvatore” that Andrea Sansovino was commissioned to carve in June of 1502 would – if it followed the conventional iconography of the Resurrection – have held a banner. In the altarpiece that Fra Bartolomeo began to paint, Saint Victor, at right, holds a large banner as well. Fra Bartolomeo’s painting, to follow Vasari, included “all the protectors of the city of Florence, and the saints on whose feast days the city has had its victories,” and it was on the feast day of Saint Victor that the Florentines had won the Battle of Cascina. The standard was a crucial motif in Leonardo’s painting, and a character in the center background of Michelangelo’s design – which the artist isolated for independent study – appears to be raising a standard as well. One of the things that makes a comparison of the two designs revealing is that the artists built them from the same basic elements.

At the time of the commission, Soderini’s decision to assign the two murals to Leonardo and Michelangelo probably seemed daring. Leonardo had not done a large-scale painting in years; the previous one he had attempted, the Last Supper in the church of S.Maria delle Grazie in Milan, may already have been coming off the wall, executed as it was in an experimental oil medium rather than in fresco. The twenty-nine-year-old Michelangelo, for his part, had trained in the workshop of Domenico Ghirlandaio, but he had never before painted an independent mural. Yet even if Soderini avoided safe commissions in favor of something less predictable, he would also have had good reasons to turn to this pair.

Two years before receiving his own commission, Leonardo had attained the remarkable distinction of being the first artist publicly to exhibit a drawing – a large cartoon depicting the Madonna and Child with Saint Anne, which Florentines thronged to see in the church of the SS.Annunziata. It was the first mature example of his sfumato effects to be seen in Florence, and a drawing by Michelangelo now in Oxford suggests that he studied it with particular attention. The phenomenon of the exhibition, moreover, is the most immediate precedent for the broad response that Michelangelo’s Cascina cartoon, another publicly exhibited drawing, would garner. Also relevant is the fact that in the ten months preceding his commission, Leonardo had worked for the warlord Cesare Borgia. He had probably witnessed real combat and he may have received the commission while at the siege of Pisa – one of the cities whose defeat the murals were supposed to celebrate. Soderini would have known that Leonardo, perhaps more than any living artist, was an expert in things military. The last painting that Leonardo had actually made in Florence, the unfinished Adoration now in the Uffizi, included fighting soldiers in the background.

Michelangelo could claim no comparable experience, even if he later helped Florence redesign its fortifications.Yet he, too, would have looked like an artist particularly prepared to undertake a grand patriotic subject: his colossal, fierce David, originally meant for Florence Cathedral, had been set up instead before the Palazzo dei Priori, the very building that housed the room where Soderini wished him to paint. The fact that the marble treated a theme familiar from predecessors including Donatello and Verrocchio made it clear how different Michelangelo’s vision for art was, especially in his rendering of the body: not a soft ephebe or a wiry adolescent but a physical marvel, a previously unseen fusion of beauty and strength. Although Michelangelo’s projected mural was intended to include a skirmish with horses, the choice to center on the Arno episode must have been made in the knowledge that it would let him paint bathers – nude figures, similar to the David in type and well over life size.

Both Leonardo and Michelangelo, in 1504, would have seemed to be making art for a new century, consciously distancing themselves from the ways of the past. Modern writers have characterized both designs as radical departures from the traditional battle painting in particular. Novelty must even have been something the patron encouraged, commissioning projects meant to celebrate a new government and a reborn state. In the end, though, neither painter completed his task.

You can find out more about Leonardo, Michelangelo, and the Art of the Figure here. 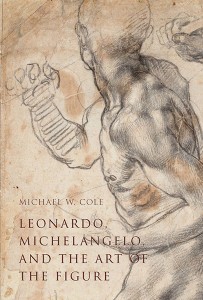 Michael W. Cole is professor of Art History and Archaeology at Columbia University.

A Little History of Sarah Young