Frank M. Turner (1944 – 2010) forged his entire career at Yale University, where he was John Hay Whitney Professor of History, Director of the Beinecke Library, and University Librarian. Richard A. Lofthouse, a former student of Turner’s and editor of his seminal lectures now available as European Intellectual History from Rousseau to Nietzsche, reflects here upon the late and great historian’s unique teaching style and working methods.

The magic of Frank M. Turner’s lectures is that they have already been delivered to hundreds, indeed thousands, of skeptical or indifferent students. Frank once joked to me that out of a hundred or so sophomores in front of him, at least two would be making out during the lecture. He wasn’t a latter day Churchill, who could be rhetorical to the point of losing the substance, and neither was he a stand-up comedian, trying to work a crowd. Frank had a very sharp wit and never missed an opportunity to serve up an irony or human absurdity with great delight.

There is much barely suppressed mirth in the lectures. In one instance we hear how Wagner, who in some sense embodied the absolute height of Victorian self-importance, dies in Venice in a building now serving as the municipal casino. It’s not a joke, but a juxtaposition of facts. Across the ages, we may not be as great as we think we are when alive. Frank thought Wagner was a buffoon, but he doesn’t go so far as to say it, because he was interested in history, not in editorializing about the past.

Early readers of the book have noted its clarity to me with such force that I wondered if they were, in an English fashion, saying that the content was light beer. It’s not. It’s just worn lightly, a crucial distinction which too few academics observe. In the age of Twitter, there are no points on offer for being exaggeratedly clever. Frank was ambitious in his career, but he deplored vanity.

As editor of the volume, my greatest agony was in fact to do with an opposite problem, what to do about the chapter on Nietzsche, where it wasn’t clear if I had been handed one lecture or one and a half. It is the longest chapter in the book and on page 249, where Frank says, “To understand why Nietzsche so heaped criticism and contempt on Socrates, one must know a bit more about Socrates in the nineteenth century,” we go off down a sub-branch of enquiry with separate passages about Hegel and Socrates, and the MP and historian George Grote and Socrates, and only then back to Nietzsche’s Socrates, and thence a particular interpretation of Nietzsche.

It is very brilliant and draws from Frank’s publication in 1981, The Greek Heritage in Victorian Britain. But it was a difficult lecture to deliver to students with no prior knowledge of any of the cast of actors, and I remember it as such. Even as a published chapter, it demands extra engagement from the reader. So no bacchanalian reveling when you get to the German.

My other challenge was simply the long, patient work of re-creating footnotes for the numerous citations, and in doing so updating the sources where a more recent scholarly translation had been published. Without Google, the labour involved would have truly immense. Even with Google, and the digitization of many standard texts (although often the oldest, least relevant editions), I spent many hours in the British Library manually scanning texts to locate or check the passage Frank had read from. Every editor has a tale to tell and normally it is a prosaic one, like this.

One reader asked me why the lecturers didn’t already have footnotes. I think they did have footnotes, but were lost on a hard drive. The issue of digital estates is already an urgent one if you are a librarian or archivist. As it stands, I am simply grateful that the lectures themselves survived as accessible documents. Had they been handwritten, they would have remained unpublished, for Frank’s handwriting was the stuff of legend. A great slanted sprawl, virtually impenetrable, the exact opposite of his thoughts.

This post was written by Richard A. Lofthouse, editor of Frank M. Turner, European Intellectual History from Rousseau to Nietzsche, available now from Yale University Press. 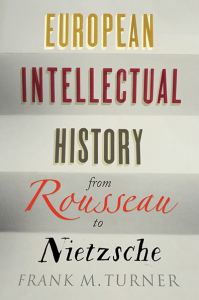 ‘Salvaging The Past: Georges Hoentschel and French Decorative Arts’

Georges Hoentschel (1855-1915) was a leading French interior designer in historic styles, head of a decorating firm, and…