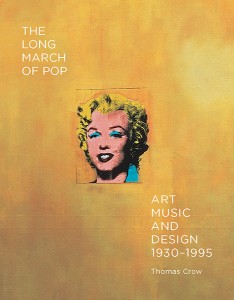 When we consider the term Pop Art, images that spring to mind might be Andy Warhol’s immortalising screen prints of Marilyn Monroe, Roy Lichtenstein’s Ben-Day dot explosions or Robert Indiana’s iconic ‘LOVE’ sculpture. Thomas Crow’s exciting new publication for Yale, The Long March of Pop: Art, Music, and Design, 1930-1995, challenges the narratives and discourses that have conventionally surrounded Pop, proposing surprising origins for the movement and a legacy that extends far and wide into unexpected forms of culture, ultimately redefining exactly what we should regard as ‘Pop’.

Renowned American art historian and critic Thomas Crow – currently Rosalie Solow Professor of Modern Art at the Institute of Fine Arts, New York University – was formerly Director of the Getty Research Institute in Los Angeles and has written many books, including classics such as The Rise of the Sixties: American and European Art in the Era of Dissent and Emulation. Thomas Crow will be ‘in conversation’ with Richard Cork at the Saatchi Gallery on 5 February 2015. 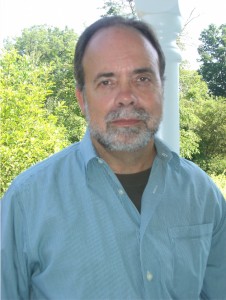 Thomas Crow, author of The Long March of Pop

The term ‘Pop’ did not coincide with the emergence of the artists we now consider pillars of the movement, Roy Lichtenstein, Andy Warhol, Robert Indiana and James Rosenquist, nor was it a conscious collective of artists working together. Instead, the movement had originated in Britain during the early 1950s with the formation of the Independent Group, a collective of artists and intellectuals who sought to re-evaluate the definition of fine art, before the actual term ‘Pop’ was coined in 1954. One member of the ‘IG’, Lawrence Alloway, moved to New York in 1961 – taking the powerful word ‘Pop’ with him. However, in its fresh American context ‘Pop’ took on whole new meaning and style. In The Long March of Pop, Thomas Crow further establishes that the seemingly random simultaneous appearance of the ‘four pillars of Pop’ had an American precedence predating the stirrings of the British movement, in the form of folk art. By examining these origins, Crow uncovers the complex matrix of Pop and how rather than being viewed in isolation, it can be seen to have clear parallels with other forms of culture including popular music and graphic design.

Rock music and Pop Art are usually considered to be defining cultural signifiers of 1960s American culture, however the two are rarely discussed in relation to each other. Despite clear differences between the two, rock music and Pop Art both shared a defiant antagonism towards a ‘self-righteous’ old guard. Bob Dylan and Warhol were initially slammed by critics who were lamenting what they regarded as the death of acoustic proletarian folk singing and of high art. In an interview in 1965 Dylan boldly stated: ‘Museums are cemeteries. Paintings should be on the walls of restaurants, in dime stores, in gas stations, in men’s rooms. Great paintings should be where people hang out … Just think how many people would really feel great if they could see a Picasso in their daily diner. It’s not the bomb that has to go, man, it’s the museums’. This link between American music and art was not unique to the 1960s and can also be seen decades earlier.

Some spreads from The Long March of Pop: Art Music and Design 1930-1995, by Thomas Crow

Whilst Alfred Barr, director of painting and sculpture at MoMA, had an infatuation with ‘people’s art’ in the form of naive artists’ work, antiquated shrines and jukeboxes (rejected by museum officials in 1942), a ‘voice of the people’ was found in American music that the visual arts lacked. Musician Woodrow Wilson Guthrie focused upon the 1914 massacre of miners, women and children in his 1941 album Funeral at Ludlow, a distinctly rural American source. Incidentally, it was through this atrocity that Abby Rockerfeller, one of the founders of MoMA, started to collect vernacular American art, having visited the area for philanthropic purposes (one of MoMA’s original objectives was to foster the crafts of America as well as modernism).

However, an interest in vernacular Americana did not immediately materialise prominently in the visual arts, and instead, music appeared to be a more receptive medium, embodied by the ‘American folksong revival’ led by figures such as Guthrie, Pete Seeger and a young Dylan. Folk art did not find its own figure of such stature until the end of the decade, when Barr purchased a self portrait by self-taught Scottish-born American artist John Kane. Barr continued to champion Kane and others similar during the 1940s and early 1950s, but this was a losing battle, as artists such as Willem de Kooning, Mark Rothko and Jackson Pollock were receiving the majority of critical attention. The visual vocabulary of folk was still not completely lost, appearing again in the early work of Jasper Johns and Robert Rauschenberg, with a similar continuity visible in the work of Ed Ruscha on the west coast. Much like the ‘people’s art’ championed by Barr in the early 1940s and songs by the folk musicians mentioned above, these artists also drew on the imagery of everyday America, and in so doing, set a precedent for Pop artists to come.

To coincide with the release of this publication and the exhibition, Post Pop: East Meets West, Thomas Crow will be in conversation with Richard Cork, art critic, historian, broadcaster and curator, at the Saatchi Gallery on 4 February 2015. Tickets are £5 and available via – Gallery Talk – The Long March of Pop.

Spider Silk: Evolution and 400 Million Years of Spinning, Waiting, Snagging, and Mating by Leslie Brunetta and Catherine L. Craig has…