A new group of deeply researched books covering the Art and Architecture of Ireland (AAI) in 5 volumes, is an extraordinary achievement by a collaboration of authors, editors, the Royal Irish Academy, the Paul Mellon Centre for Studies in British Art and Yale University Press. Having just launched these publications to great acclaim in Dublin, Yale’s Senior Art Acquisitions Editor Sally Salvesen tells the story of what has been a momentous project – and its incredible reception. 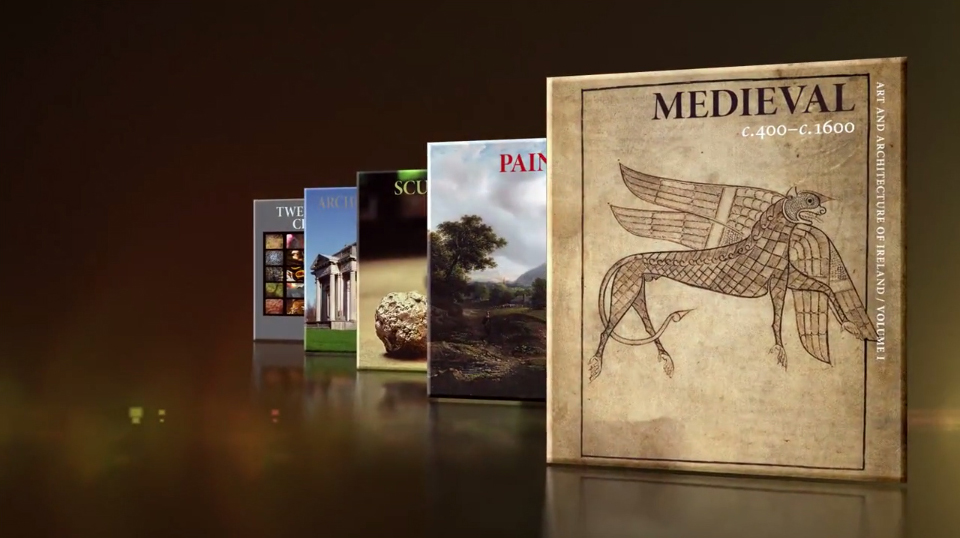 Art and Architecture of Ireland in 5 volumes

Ten years ago I was in Dublin working with Anne Crookshank and the Knight of Glin on the second edition of their book Ireland’s Painters, when Robert Towers, our Irish representative, arranged a meeting with Nicola Figgis of University College Dublin (UCD) and Brendan Rooney of the National Gallery of Ireland. They, with Rachel Moss and Paula Murphy, had begun to think of the possibility of updating or replacing Walter Strickland’s Dictionary of Irish Artists (1913) later revised by Theo Snoddy (1968). It was obvious that it would be a daunting task, and I heard no more for several years.

By 2007 Paula Murphy, also of UCD, an expert on sculpture and author of Nineteenth-Century Irish Sculpture, had enlisted physicist Professor Jim Slevin, then President of the Royal Irish Academy, who secured support from the Naughton Foundation and the Irish Ministry of Arts, Heritage and the Gaeltacht. Suddenly under the direction of Carmel Naughton two volumes (Painting and Sculpture) had become five (Medieval, Architecture and Twentieth Century were added), editors for all volumes were appointed, a project team was in place, and contributions were being commissioned. For publication, Yale University Press was fortunate to be joined by the Paul Mellon Centre for Studies in British Art.

A vast range of structures, themes, issues had to be teased out. Every volume had different requirements and the original notion of a dictionary was superseded by the concept of a survey of the Art and Architecture of Ireland in five volumes. It would still include numerous biographical entries, but they would be complemented by a wide range of thematic essays arranged in various groups. This ensured that the project would build on the recent work of other scholars, rather than repeating it.

The statistics are daunting: 274 authors contributed, 10 editors shaped the 5 volumes, under the guidance of a general editor and editorial boards; 2 millon words written, 3,000 images collected. And on the publishing side, 4 designers working to one brief, 3000 pages including 2900 images magnificently printed by Conti Tipocolor in Italy, and finally 5 books weighing a total of 34 lbs. Midnight oil burnt – unquantifiable. There was much to celebrate.

At midday on a Sunday in November more than 700 people gathered in the Mansion House, the Lord Mayor of Dublin’s official residence, to launch the series. Among the guests were the Irish prime minister (Taoiseach) Enda Kenny; Minister for Arts, Heritage and the Gaeltacht Heather Humphreys; trustees of the Naughton Foundation led by the remarkable Carmel Naughton; American ambassador Kevin O’Malley; many of the contributors, artists and architects featured in the Twentieth-Century volume; Mark Hallett, director of the Mellon Centre; and hundreds of supporters.

Some of the participants gathered on the lawn for a group photo, while a demonstration against the introduction of water rates at the entrance heightened the drama, ensuring a large police presence and headline reports in all media, as well as great news coverage of the project. The Irish Times is running a 2-year series on Modern Ireland in 100 Artworks, drawing on the twentieth-century volume. Irish radio (RTÉ) has embarked on a 6-part series introducing the whole project and each individual volume, and there is more to come.

In the speeches the sense that the books are a major cultural achievement for the whole island of Ireland was constantly reiterated. No other nation has produced such a comprehensive survey covering 1600 years of artistic endeavour both at home and internationally, exploring the impact of artists who came to Ireland from abroad, and Irish men and women who traveled across the world to work. The Taoiseach described the books as phenomenal gospels of Irish culture. Now it’s exciting to learn that scholars in Norway, drawing directly on the Irish example, are beginning to explore the possibility of a comparable project.

The next evening the whole event was repeated in the Edwardian marble splendour of Belfast City Hall. Again there were contributors and artists present, and 200 guests on this occasion. Instead of the Taoiseach, the Northern Ireland Deputy First Minister, Martin McGuinness, made a speech full of passionate political rhetoric, celebrating creative endeavour in Northern Ireland and quoting both Paul Mellon and Seamus Heaney to make the connections between art and peace.

Watch a video about Art and Architecture of Ireland or read more about the books here.

Introduction to the Art and Architecture of Ireland (AAI) from The Royal Irish Academy on Vimeo.

In the third in our series Countdown to Global War, Evan Mawdsley, author of December 1941 discusses the events that took…