‘When Speer’s father saw the model of Berlin, he responded to his son, “You’ve all gone completely insane”.’

Albert Speer left an indelible imprint on German architecture in the run up to his involvement with Hitler and the Nazi party. His complicity in creating the blueprints for Welthauptstadt (‘World Capital’) Germania, however, demonstrate a darker side to his artistic talents. Here is an extract from Chapter 13 of Jonathan Petropoulos’ Artists Under Hitler that reveals Speer’s enduring impact on Nazi aesthetics.

‘So what does one make of Albert Speer? Of course, if Speer, like Hitler, had stopped in the late 1930s, the record would look very different. That he oversaw armaments production at a key time in the war, that his system depended on slave labor, and that he held high office in a regime that undertook a genocidal program cannot be ignored in any assessment of his career during the Third Reich. Speer would maintain that he was always first and foremost an architect/designer, and that he never completely gave up work on either the Berlin or the Nuremberg projects even after becoming Reich Armaments Minister in early 1942. Indeed, he continued to pursue construction projects during the war. He had set up his own transportation network (Transportflotte Speer) that provided him with a means of circumventing wartime restrictions on vital goods and services, and he protected workers from conscription into the Wehrmacht. While Speer helped design other, more practical buildings for the Luftwaffe and the other branches of the armed forces, he also made progress on the German Stadium at Nuremberg and on various representational Berlin projects. Speer’s workers continued to build at these sites after 1940 with the stone obtained with forced and slave labor. Concentration camp labor, especially at Flossenbürg, Gross-Rosen, and Natzweiler, quarried the stone for Speer’s projects. The pace of the building slowed appreciably after the defeat at Stalingrad in 1943, and as a result much of Speer’s work from the Third Reich was never completed. Most of his designs were left in unfinished form or in plans and models. These models were remarkably elaborate and detailed. Monumental models, one could say.

The models for structures in “Germania” are in themselves disturbing, and offer evidence that one cannot separate his artistic work from his political career. There was something criminal in these grandiose plans. The Great Hall that he designed at one end of the three-mile-long North-South Axis would have featured a ceiling of almost seven hundred feet (210 meters), and would have had its own microclimate—one that included periodic rain. The scale of the structure so dwarfed and alienated the observer that it sometimes elicited humorous comments: one critic described the Great  Hall as an “elephantine Valkyrian breast.”64 A triumphal arch farther down the axis (known as the Prachtstrasse) would rise some four hundred feet (120 meters), such that the Parisian counterpart would fit inside it. Speer later reflected on his thinking during the summer of 1940: “Even if [Hitler] had not carried out his war in the Soviet Union, completing all of the building plans then on the drawing boards within the ten years he had set as a limit would have been impossible. The projects together amounted to the biggest construction programme in history.”65 Speer’s building projects would have exacerbated the already dire labor shortage in the Third Reich and would have required the enslavement of millions more to realize the 1950 target date (three million workers by one calculation). His driving, frenetic pace of work had earlier precipitated labor unrest in Nuremberg when workers were pressed to complete the Zeppelinwiese. Conquest allowed the Nazis to secure certain raw materials in short supply: for example, granite and marble in the Soviet Union. When Speer’s father saw the model of Berlin, he responded to his son, “You’ve all gone completely insane.” There is some evidence “that Speer, driven by ambition, designed projects that actually surpassed Hitler’s mammoth dreams.”66 Speer pushed the limits of the possible: there were even questions whether the marshy soil of Berlin could accommodate certain buildings, lest they sink into the ground.’

You can read more about Artists Under Hitler here. 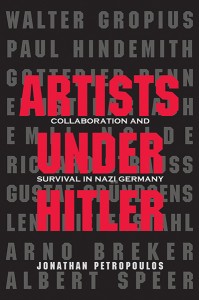 Alan Allport, the author of the forth coming book: Demobbed, will be joining us from tomorrow (18 June 2009), here at the Yale London Blog, to retell the day-by-day British experience of military demobilisation after the Second World War.