Our final extract from Those Who Hold Bastogne, Peter Schrijvers’ dramatic account of the 1944-5 winter of war, rejoins the fight as General Patton and his Third Army struggle to break through German lines and establish a supply line to Bastogne’s beleaguered defenders. Although Patton had made good on his boast to wheel six divisions north to begin the relief of Bastogne within three days, German resistance proved tenacious, and Christmas had come and gone with Bastogne still besieged. But Patton’s men were persistent in their efforts to capture ground and by afternoon of Boxing Day the tip of the American spear, the 37th Tank Battalion, was just over two miles from Bastogne, although down to twenty tanks and undermanned. Although attempting to break through to the town was a risk, the sight of supply aircraft going down in flames over the town persuaded Lieutenant Colonel Abrams, commanding officer of the 37th, that Bastogne must be relieved immediately…

It would soon be dark, however, and there was not a minute to lose. Abrams was already barking orders over the radio, rounding up 13 artillery batteries from Combat Commands R and B to ensure that a massive barrage would precede his spearheads into Assenois. Next Abrams called Lieutenant Charles Boggess to his command tank. Boggess had been put in charge of C Company just a few days previously, when the original commander was killed. C Company had nine tanks left and was to form the advance element of the final push. The tank crews were to receive the support of a company of armored infantry, some 45 men in half-tracks. The 32-year-old lieutenant from Vermilion County, Illinois, followed Abrams’ finger as it traced the secondary road on the worn map. “Get to those men in Bastogne,” Abrams concluded the hasty briefing.

At 1615 Lieutenant Boggess moved off in the lead tank. He was proud of his tight-knit crew. His driver had learned invaluable skills on a tractor in Georgia. The 76mm gunner had worked in a defense plant in New Jersey before the war. The loader came from a small farm near Bryan, Texas. And the bow gunner was from Arlington, Washington, and had just graduated from high school the previous year. They were “all battle-proven veterans,” and Boggess knew that he could rely on them during the tough ride ahead. Nicknamed “Cobra King,” their tank was a Sherman Jumbo, one of a limited number of medium tanks fitted with sloped and much heavier armor that could better withstand the impact of enemy shells.

As Assenois came into sight, Lieutenant Boggess radioed Abrams and asked for the planned artillery concentration to be brought down on the village and surrounding woods. “The town,” Boggess observed, “seemed to erupt.” The Germans in Assenois were numerous, as Fallschirmjäger and Volksgrenadiers literally stood back to back. Heilmann’s men had their guns trained on Patton’s troops to the south, while Kokott’s soldiers were eyeing McAuliffe’s force to the north. More than 400 rounds pounded the area, while aircraft of the 402nd Fighter Group doused it with napalm and strafed anything that moved. Denyse de Coune pressed her body against the forest floor. On Christmas Day the Germans had chased her and 25 other civilians from Assenois and taken over their cellars. Of the people in their group, 17 were children, one of them no older than seven months. As explosions shook the trees and dirt and branches rained down on them, the villagers just lay there, their blankets frozen stiff like cardboard, their limbs too numb to allow them to get up and run. “We feel,” a helpless Madame de Coune noted, “like we are in God’s hands, and we resign ourselves to it.”

Lieutenant Boggess asked the barrage to be lifted only moments before his men reached the edge of Assenois. By that time, an American shell had already hit the jeep of the forward artillery observer, forcing the pilot in the spotter plane overhead to take over his duties. With the air still thick with smoke and dust, the armored spearhead took the dazed Germans by surprise as it raced through Assenois, guns blazing. Boggess’s New Jersey gunner recalled using the 76mm cannon “like a machine gun,” firing “twenty-one rounds in a few minutes.” The small column that emerged from the village’s northern edge was made up of Boggess’s Sherman Jumbo, two standard Shermans, a half-track with armored infantry, and two more tanks bringing up the rear. Moments later, the half-track hit a mine. The explosion killed several of the infantrymen on board and forced the tanks behind the damaged vehicle to screech to a halt.

Patton’s spearhead to Bastogne was now reduced to just three tanks. All that remained between them and the besieged town was a small stretch of road wedged between dense forests. Lieutenant Boggess ordered the gunners in his crew to aim straight ahead. The second tank covered the woods to the left. The last tank’s machine guns were raking the tree line to the right. A pillbox became visible up ahead. Boggess’s cannon sent three rounds crashing into the concrete obstacle in rapid succession. German soldiers spilled out onto the road and the machine guns opened up. “They fell like dominoes,” recalled Boggess. The lieutenant now motioned his driver to have the tank creep forward slowly. Colored parachutes were strewn about in a nearby field, and Boggess knew that this meant they were close to the American lines. Then, in the dusk, he spotted a line of foxholes. The helmeted figures in them held their fire. “Come on out,” Boggess yelled, “this is the Fourth Armored.” He had to repeat the call a couple of times before a shadow cut loose from one of the foxholes and slid towards the “Cobra King.” The man stretched his arm up to the turret to shake hands. “I’m Lieutenant Webster of the 326th Engineers, 101st Airborne Division,” said the paratrooper with a smile. “Glad to see you.”

With only three of Patton’s tanks inside Bastogne’s perimeter, the handshake between lieutenants Charles Boggess and Duane Webster at 1650 on Tuesday, December 26, was no more than a symbolic end to the siege. Slowly, however, more and more vehicles and troops of the 37th Tank Battalion trickled in, despite continued German harassment from the woods along the road from Assenois. Not long after the first handshake, a tank named “Thunderbolt” rolled into the paratroopers’ lines. A painted cloud pierced by three jagged bolts of red lightning adorned the hull. Colonel Creighton Abrams clambered from his command tank. He and his crew had fought hard against a resurgent enemy at Assenois and had taken out an 88mm gun along the way. The tank commander was soon shaking hands with General McAuliffe, who had bolted from his underground headquarters and rushed to the southern perimeter to greet Patton’s men in person. One of the “vagabonds” – the young Belgian men who had assisted the Americans during the siege – watched as a sentry in the middle of Bastogne’s market square raised his arm to stop Patton’s first Shermans, solemnly saluted the crews, and then directed them to the Grand’rue. Abrams and his staff were taken to the cramped space of the Heintz command post, where they received a raucous welcome. “They were happy to see us,” noted Major Edward Bautz, Abrams’ executive officer. “Real happy.”

Extract taken from ‘To the Rescue’, Chapter 6 of Those Who Hold Bastogne. 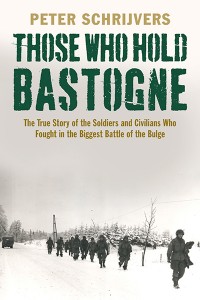 Author Article by Michael Slater: Charles Dickens – An Attempt on His Life

In Charles Dickens, MICHAEL SLATER draws upon a lifetime’s study to bring us a fascinating exploration of the…