Father Francis Browne is a remarkable figure in the history of photography. Whilst he dedicated himself to life as an Irish Jesuit priest, he was also present at many of the pivotal events of the 20th century, and bore witness to them through his work. His photographs of the Titanic – some of the last of the ship before it met with disaster – and of his time on the Western Front, have become iconic. His images are inextricably linked in the public consciousness to such momentous events. Father Browne’s special personal insight into historic moments that appear to dwarf the individual led one newspaper editor to describe the discovery of Browne’s negatives, 25 years after his death, as ‘the photographic equivalent to the Dead Sea Scrolls’.

Frank Browne: A Life Through the Lens, published this winter, is an in-depth survey of an important body of photographic work. The book presents a selection of photographs from Browne’s youth right up until the 1950s, along with informative essays by David Davison and Father Edward O’Donnell SJ, and includes an introduction by Colin Ford.

Frank Browne (1880-1960) was born in Cork, Ireland. At age 17, before commencing his studies for the priesthood, he embarked on a tour of Europe armed with a camera. Browne quickly discovered a strong affinity for photography, and continued to take photographs throughout his life. Given a ticket for the Titanic as a present, he sailed on the ship from Southampton to Cobh via Cherbourg. During the voyage Browne befriended an American millionaire and his wife, who offered to buy him a ticket for the full voyage. Browne would have accepted the ticket, but his Jesuit superiors insisted he disembark once the ship reached Ireland, affording him the opportunity to take the last ever photograph of the ship afloat as she steamed away from Cobh.

After being ordained he joined the Irish Guards as a chaplain in 1916, going on to serve on the Western Front. Browne was present at many of the most infamous and bloody battles of the First World War, including the Somme, Ypres, Passchendaele and Arras, and was often noted for his bravery; his commanding officer Harold Alexander, later supreme Commander of Allied Forces in the Mediterranean during WWII, declared that ‘Father Brown was the bravest man I ever met’. This bravery was recognised with a Military Cross, along with comparable honours from the Belgian and French governments.

Following the Armistice, Browne returned to Dublin but was sent to Australia in 1922, in part because it was hoped that a warmer climate might improve his health, which had suffered due to his injuries from shrapnel and mustard gas. He stopped off in South Africa on the journey down, and much of the Mediterranean on the return journey, and his photographs provide crucial documentation of this interwar period. Upon his return he was appointed to the Retreats and Missions staff of the Jesuits and spent the remainder of his professional life travelling around Ireland and Great Britain, which afforded him ample material for his hobby. It is estimated that Browne may have taken as many as 42,000 photographs in his lifetime.

It was not until 1985, however – when Father Edward O’Donnell discovered a large trunk in the Irish Jesuit Provincial’s House and found it packed with negatives and photographs – that Browne was catapulted to international fame. Father Browne’s life and work is recorded in the superb selection of images presented in this book.

Frank Browne: A Life Through the Lens is now available to purchase 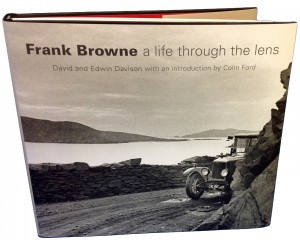