How were the Nazis able to conceive of eradicating an entire people… of ‘A World Without Jews’? This week marks 76 years since  Kristallnacht, the moment when rising levels of anti-Semitism in the Third Reich reached crisis point. Some 30,000 Jews were incarcerated and sent to concentration camps as their homes, businesses and synagogues were ransacked, demolished and burned.  The pogrom represented a turning point for Germany: persecution of the Jews, already manifest socially and economically, transformed into open physical aggression. While the facts about  Kristallnacht and the Holocaust  are well-known and documented in history, Alon Confino’s A World Without Jews is a history of imagination, an attempt to trace the stories people told each other that made it possible for them to imagine a world in which Jews did not exist.
[youtube http://www.youtube.com/watch?v=C1BwavNXK-k?list=PLGaj9WGos1FYVQuK-TvTxPhfplPo5ukKu]

In this video Professor Alon Confino explores the difficulty of explaining the Holocaust, ‘not because of what happened at Auschwitz, but because of the imagination that made Auschwitz possible to begin with’.

Confino takes the burning of the Hebrew Bible as his story’s central image, asking why a regime so apparently concerned with racial ideology directed so much energy against a religious symbol. For Confino the answer lies in the Nazi’s attempt to create a break with the past, to create a new paradigm for civilisation. To create this new civilisation the morals of the past, signified by the Ten Commandments, and the Jewish culture they came from had to be utterly exterminated. By drawing on an array of archives across three continents to provide an insightful new assessment of one of the central moral problems of the twentieth century, Confino demonstrates that the mass murder of Jews during the Second World War was powerfully anticipated in the culture of the pre-war years. As the German people imagined a future world without Jews, persecution and extermination became imaginable, and even justifiable.

The extent to which this story first penetrated and was then  propagated by the collective German psyche in the years before the war becomes appallingly apparent through the course of the book. Confino shows that the persecution of the Jews was instigated as much at a grass-roots level as it was by the Nazi administration. In one anecdote, chronicling the spontaneous book burnings that took place throughout Germany following Hitler’s appointment as Chancellor, Confino notes that while the Nazi’s supported the actions of the book-burners they also wished that the organisers of these events had notified the party of what was to happen and sought clearance from them. A real sense of collective mania also pervades some of the descriptions: Confino compares the charges levelled against the Jews with those made against supposed witches in the Middle Ages, and identifies the only difference being that witches were believed to fly. The cumulative effect of these pertinent, well-researched examples is an all too vivid picture of a society which first imagined and then implemented a horrific fantasy. 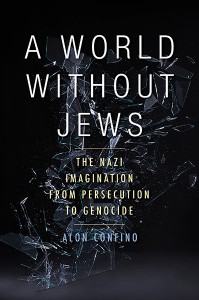 A World Without Jews is available now from Yale

From Athens to Afghanistan: ‘Perilous Glory’ by John France questions the notion of a Western way of war