Following the recent Ukrainian elections, Andrew Wilson, Ukraine-iac and author of Ukraine Crisis, sets out what the results mean for the turbulent region.

The Ukrainian elections on 26 October seem to have resulted in at least a partial reboot of the political system. The expected coalition of three pro-European parties should have a comfortable majority. But the voting also revealed the growing tension between the old and the new Ukraine. To pessimists like Katya Gorchinskaya of the Kyiv Post the elections “confirm that it’s still business as usual in the political scene. We could already see that in the economy. Now we can see it in politics too”. The President’s party, the ‘Poroshenko Bloc’, had few qualms about who flocked to its banner, with too “many manoeuverers and conformist businessmen”, according to political scientist Olexiy Haran, many of whom allegedly paid for their places. TV channels owned by the leading oligarchs show-cased the latest fashion for ‘proxies’, i.e. fake experts and ‘ordinary Ukrainians’, used by nearly all the parties to attack each other.

The original revolutionaries and civic activists from the Maidan protests under-estimated their prospects and scrambled for places on the mainstream parties’ lists. But the first big surprise was that their natural supporters saw little reason to vote for a few good guys surrounded by the same old faces. So instead they gave a big vote to the newest party, Self-Help, which came third, and to Prime Minister Arseniy Yatsenyuk’s Popular Front, after it shifted its campaign tactics to a clever last-minute appeal that he should keep his job as the President schemed to replace him. The Front’s spectacular rise in the polls pushed the Poroshenko Bloc into second place.

And after the elections, the civic activists say the gloves are off. They held off criticizing the government while the war in the east was still hot: now they will only do so if it flares up again – even if they are part of the new government. Their priority is real lustration – the local word for purging the old guard. First in their sights is Poroshenko’s do-nothing Chief Prosecutor Vitaliy Yarema – a victim of the activists’ current favourite tactic of using drones to film the houses of mysteriously opulent politicians.

The civic activists are also joined by more than twenty veterans of the war in the east. Too much is made of the threat of their leading a ‘new Maidan’. According to Haran, “this is Russia’s preferred scenario” and “most veterans are realists”. But they represent a martial mood little understood in the West. Only a handful are prepared to fight Russia directly and without Western support. But most think they would have beaten the separatist forces on their own, if Russia hadn’t intervened to back them up with regular forces and the West had done so little to stop them. The veterans argue strongly for the right to continued muscular defence, especially as the borders of the rebel republics in east Ukraine are neither secure nor stable.

The campaign was also notable for the idea of ‘self-help’ replacing Ukraine’s Messiah complex. The previous generation of protestors from the ‘Orange Revolution’ in 2004 now regret putting all their faith in the man they installed as president before going home. This time they kept their distance from traditional politicians as they tried to organize a ‘leaderless revolution’. Only former Prime Minister Yuliya Tymoshenko stayed stuck in Messiah mode, and only just won the minimum 5%.

The elections also pitted real patriotism against fake. The populist Oleh Lyashko, who ran a noisy campaign full of simplistic slogans and solutions, promoted on oligarchic TV by his party’s alleged secret business sponsors, saw his bubble deflate if not fully burst – his 6% was only half of what earlier polls had predicted.

So the new coalition has a majority to take decisive action, and no excuses if it does not. But the new culture of transparency, internet and new technology activism will still conflict with the old culture of hidden deal-making. The latter may be good for striking compromises with Russia, but the former will be needed to revive a moribund economy.

Another paradox of the elections is that many odious supporters of the old regime were elected in the ‘liberated areas’ in the east. The Opposition Block won almost 10%, despite being more openly pro-Russian than the old ruling Party of Regions of ousted President Yanukovych. According to Haran, “Putin is still interested in seeing how big a Fifth Column he can get in the parliament”. But paradoxically this may be a good thing; if it means Russia backs off other forms of pressure, such as direct military action or cutting off the gas supply. It may also be useful for the new government to have a clear enemy to mobilize against. Though Russia may not stick with this strategy for long, if it realises it only has a minority share in Ukrainian politics, not a blocking veto.

But Russia is also looking more cost-sensitive as Western sanctions begin to bite – it is aware that attacks from the rebel republics on the rest of Ukraine could not be easily disguised. But they remain an option, and the picture could change again in a week. The rebel republics boycotted the vote and will hold their own ‘elections’ on 2 November, after which is far from clear that it will still be worthwhile or possible to hold the local Ukrainian elections in the Donbas agreed in the cease-fire agreements for 7 December – in which case the agreements might unravel.

The West meanwhile is struggling to play catch-up, or is simply too distant to understand what is going on. Ukrainians are war-weary, but still want the right to fight, or at least to deter the rebel republics from further attacks or destabilization of the rest of Ukraine. Western talk of Russia’s ‘legitimate interests’ in Ukraine looks absurd confronted with the sheer brazenness of Russia’s interference in Ukraine’s internal affairs on the ground. Nor does the West understand Russia’s zero-sum thinking. The EU clearly erred by delaying the implementation of its trade agreement with Ukraine to pacify Russia before the elections. Russia simply pocketed the concession and moved on: it now wants to renegotiate the agreement itself. But most important of all, admirable though the slogan of ‘self-help’ may be, the West should support the new government. Even if has the best of intentions, even if matched by good deeds, Russia has the power to trump any progress if it is not deterred.

Andrew Wilson’s latest book Ukraine Crisis: What it Means for the West was published on 14 October, as both paperback and e-book. You can read an extract here, or listen to a podcast here. 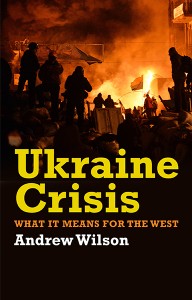 Wellington & The Battle of Waterloo: A Timeline