Shortly before his death in 1837, Giacomo Leopardi, a prolific Italian writer, translator, and thinker, began to organise a small, thematic collection of his writings in an attempt to give structure to his philosophical musings. This collection, culled from his 4,500-page diary, Zibaldone, provides a fascinating introduction to the arguments and insights of a man, who, while not fully recognised in his lifetime, paved the way for the likes of Nietzsche, Dostoyevsky, Wittgenstein, Gadda, and Beckett.

John Donatich sat down with master translator, novelist, and critic Tim Parks, whose translation of this collection, Passions, encompasses the full breadth of human passion through 164 of Leopardi’s entries. In this episode of the YaleBooks Podcast, they discuss the significance of Leopardi, what drew Parks to the work, and what lessons Leopardi might have for the modern world.

Tim Parks is the author of fifteen novels, including Europa, which was shortlisted for the Booker Prize; four acclaimed memoirs of life in contemporary Italy; and other nonfiction works. He runs a postgraduate degree program in translation at IULM University in Milan and has translated works by Moravia, Calvino, Calasso, Machiavelli, and numerous others. 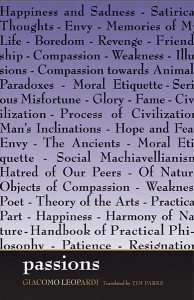 To delve very far inside Turner’s mind we need to get inside his art, for that is almost…