In this blog, Yale UP author Charles Freeman writes about the significance of the Shroud of Turin, and how it came to be seen as an important medieval relic.

When I was writing my Holy Bones, Holy Dust, How Relics Shaped the History of Medieval Europe (Yale, 2011), I left out the Shroud of Turin. It never had an important cult following before the sixteenth century and the debates over its authenticity seemed intractable. It was only when I was preparing a study tour of Baroque Turin that I came across an engraving of an exposition of the Shroud by Antonio Tempesta. It was dated to 1613 and showed features that have now faded from the two images of the crucified Christ, notably the Crown of Thorns in place. Fifteenth and sixteenth century travellers’ descriptions of the Shroud confirmed that the images were much stronger than they are now and that everyone was moved by the extent of bloodstains. This fitted well with the iconography of the fourteenth century with its emphasis on the sacrificial blood of Christ and this dating was strengthened by the overall flagellation marks on the images, a representation of Christ’s scourging not known before the fourteenth century. (The inspiration came from theologians using Isaiah 1:6 as a premonition of the scourging.) This matched well with the carbon dating of 1988 that had come up with a 95 per cent certainty that the flax had been cut between 1260 and 1390.

The gospels talk of Jesus being wrapped in linens and buried with a face cloth. So this was clearly not a forgery- no forger would have added images to a single cloth when none are mentioned in the gospels. It seems probable therefore that the origins of the Shroud lay in some form of ceremonial use. The most likely was the Easter ceremony of Quem Queritis where a grave cloth, often, according to the documents, only a single sheet, was brought out from a makeshift tomb and shown to the congregation to confirm that Christ had risen. The so-called Lirey pilgrim badge depicting the Shroud from c. 1355 does indeed show it being held out by clergy above an empty tomb. The Shroud may the only one of these cloths to have survived, a fascinating footnote to the history of medieval drama.

I have presented my argument in detail in the November issue of the UK magazine History Today, part in the print edition, the whole in the digital edition, the text without most illustrations directly available on their website. How a ceremonial cloth was transformed into a relic of the actual burial cloth of Christ is another story but it would seem, in comparison to similar artefacts, that the Shroud must have originally inspired veneration through (alas, unrecorded) miracles. It was the dukes of Savoy who converted it into a high prestige relic in the sixteenth century and even today there are many who believe it to be authentic, despite the lack of any credible evidence for its existence before the fourteenth century, its failure to conform with the gospel accounts of the wrappings in which Jesus was buried, and the radio-carbon dates that fit well with the original iconography. 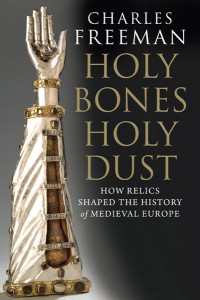 Charles Freeman is a specialist on the ancient world and its legacy. He is the author of numerous books, including the bestseller The Closing of the Western Mind.

‘Mud, I fear is immortal. Mud was, mud is, and mud will be. Dig what sewers we may,…