The exhibition Sculpture Victorious: Art in the Age of Invention, 1837–1901, currently showing at the Yale Center for British Art, opens at Tate Britain on 25th February 2015, and will showcase the finest elements of Victorian visual culture during the British Empire. Paradoxically, as one of the most public art forms, these extraordinary sculptures have come to be somewhat overlooked in comparison to the enormous interest in other Victorian cultural artefacts. This exhibition brings together rarely seen works of sculpture, giving an idea of the different creative possibilities of the time. As Britain became the first urban and industrial modern nation in the Victorian era, it witnessed an efflorescence of sculpture on an unprecedented scale. Public monuments were raised across Britain and its empire, while ambitious sculptural programmes were commissioned for public institutions. Exhibition spectaculars, such as the Crystal Palace at Sydenham, brought thousands of sculptural objects before audiences of millions, while sculpted portraits of the monarch circulated the globe in the form of coins and medals as well as life-size figures.

The catalogue is almost as magnificent as the sculptures themselves…

Yale’s luxuriously illustrated catalogue, available in December, accompanies the exhibition, and demonstrates the extent to which creativity in sculpture reigned supreme. As a reflection of the power of the British Empire, sculptors used increasingly valuable materials, favouring gold, colourful marbles, gems, silver and porcelain to adorn public spaces. The subtitle of the catalogue ‘Art in the Age of Invention, 1837–1901’ suggests a new way to view the modern and industrial nature of creativity under the reign of Queen Victoria.

You can buy Sculpture Victorious here 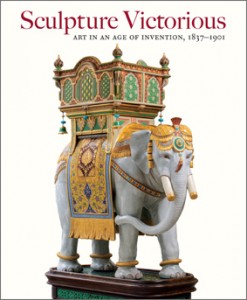 When Leonardo Met Michelangelo: The Art of the Figure

The early 1500s lay claim to some of the most impressive and important artists in history, with giants…