Notes on Patrick Modiano and Suspended Sentences from the translator, Mark Polizzotti – 2014 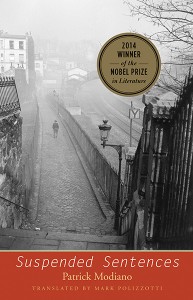 At first blush, the qualities suggested by Patrick Modiano’s fictions do not shout ‘Nobel’. Unlike Sartre (the laureate malgre lui), with his grand philosophical pronouncements, or France

’s previous honouree, the famously peripatetic J. M. G. Le Clezio, Modiano tends to keep to himself, in narratives that are often barely 100 pages long and that rarely seem to rise above a murmur.

Modiano’s subject matter, on the other hand, is anything but lightweight, and this is where the business of translating him becomes both a pleasure and a challenge. What makes his books so affecting is their ability to blend a spare, apparently effortless delivery with an emotional depth and resonance that belie the surface plainness. Often the most seemingly straightforward sentence will require long reflection and numerous passes before the English starts yielding the same level of evocation. The novelist Harry Mathews has identified the particular qualities of Modiano’s writings as ‘intimacy, precision, and a ruthless avoidance of reassuring conclusions.’ The best of these writings combine fiction, nonfiction, and memoir, bringing into play elements of political and personal history in a fluid, seamless whole. What keeps them all together, what keeps them moving (in both senses of the word), is the beauty of his phrasing and the clarity of vision that informs it, along with a truly human curiosity and inclusiveness. And alongside this, an abiding love of Paris, a resurrection of its obscure byways and lost neighbourhoods, that make his novels an armchair explorer’s grimoire.

In Modiano’s body of work, characters and events recur from one book to another, in different guises, obsessively, forever unresolved. This has led some reviewers to complain that he produces the same novel over and over. (Modiano, meanwhile, has stolen a march on his critics by saying that he ‘has always felt that [he’s] been writing the same book for the past 45 years.’) But of course, the truth is less glib than that. These characters and events form a knot of experience that must be picked at but can never be untangled. Whether expressed with the darkness of the novella Flowers of Ruin or the gentle nostalgia of the children’s book Catherine Certitude, the kernel remains eternally the same, haunting and inexhaustible.

One constant of Modiano’s narratives is the presence of World War II and the German Occupation. Whether these narratives actually take place in the time of l’heure allemande or whether, as is more often the case, they are set in the present, or in the 1950s of the author’s childhood (as in the title novella of Suspended Sentences), an atmosphere of 1940 hovers over them, imbuing them with a sense of menace, of subtle, persistent imbalance.

The Occupation has been described as the ‘black hole of French memory’. Modiano’s particular talent has been to extend that void, to expose the profound moral ambiguities it covers over and the responsibility for those ambiguities in the most mundane aspects of his characters’ daily lives. Similarly, the Nobel citation (2014) focused on ‘the art of memory with which he has evoked the most ungraspable human destinies and uncovered the life-world of the Occupation’. At the same time, one has the frequent impression in his books that the narrator’s memory is faulty, subject to lapses and short-circuits, suggesting that the facts being related are not as reliable as we’d wish, that certain crucial elements have been left out: responsibility is an uncomfortable burden to shoulder. It is no accident that many of these narratives flirt with tropes of the roman noir or take on the character of private investigations.

A number of Modiano’s books are haunted by the anxiety of failure—personal failures, historical failures, failures of basic humanity. It is an anxiety with which most of us can identify, and in the final account, this may be the most resonant aspect of all in Modiano’s novels: the underlying sense that, no matter what we do, it is never quite good enough to compensate for the disappointments we fear we have inflicted, or that have been visited on us. It would be comforting to think that, in Modiano’s case, at least, his recognition by Stockholm might lay these anxieties to rest. But as so much of his work reminds us, it is these anxieties that largely define our human condition, and they are here to stay.

Yale University Press has published seven novels by Patrick Modiano and translated by  Mark Polizzotti, in the The Margellos World Republic of Letters series. His latest novel Invisible Ink will be released in November 2020.

Mark Polizzotti has translated more than forty books from the French and is director of the publications programme at The Metropolitan Museum of Art, New York.

An A-Z of the World – E. H. Gombrich on: Leonardo da Vinci