Paul Ginsborg’s Family Politics tells the story of the 20th-century through the lens of the family, examining key moments of revolution and dictatorship in the context of family life. Despite the importance that most people place on their family, Ginsborg found that the family is ‘hidden from history’, a status he challenges by showing that families do not merely experience political events, but are themselves actors in history. His groundbreaking new book spans 1900–1950 and focuses on family life in five nations which experienced dramatic changes during those times: Russia, Turkey, Italy, Spain and Germany.

As well as exploring family life through social and political history, Ginsborg highlights human and individual history with biographical studies of individual families, supported by photographs and portraiture. In the following extract from Family Politics, Ginsborg uses the history of the notorious Goebbels family to trace National Socialist conceptions of family, racial purity and gender roles. He shows how the Goebbels family was held up as an emblem of the Aryan values which Hitler and the Nazi’s wished the nation to emulate.

Family Politics: The Making of a Nazi ‘Family Man’

Magda Quandt and Joseph Goebbels were married on 19 December 1931, on the Quandt family estate in Severin, in rural Mecklenburg. The staging of the marriage there was an act of symbolic generosity on Günther’s part, perhaps made also with an eye to the future of the Quandt industries in a Nazi Germany. Hitler was Goebbels’s best man. In the extraordinary photograph of the marriage we can see a radiant Goebbels, for once dressed well, accompanying a deeply content Magda. Even shorter than her diminutive husband,she is wearing black to signify that she is no longer a virgin. Her son, the ten year-old Harald, is dressed in the uniform of the Deutsches Jungvolk. Hitler himself walks behind the couple, sporting a rather unusual double-banded high hat. The whole procession is flanked by men giving the Nazi salute. Magda Quandt and Joseph Goebbels were to have six children together – five girls and one boy. Their family, which always included Magda’s son Harald, was erected by the regime – and above all by Goebbels himself – into an archetype of Nazi domestic life: well turned out, well disciplined and above all kinderreich, which literally means ‘child- rich’, but in the language of the Nazis also meant ‘hereditarily healthy’ and ‘racially valuable’. In a remarkable photograph the Goebbels family is presented to the German public in the form of a pyramid which culminates with the blond and serious Harald in Luftwaffe uniform – the very embodiment of the young Nazi male ready to serve state and country. This self-publicity, the propagation of one’s own family as an ideal type, is highly particular. It is certainly very unusual among the principal figures studied in this book, including Hitler, who declared himself, as we shall see, unsuited to family life. Lenin would never have dreamed of it, nor would Kollontai. What had they in their private lives to recommend as a general model? Very little. The same was true of Mussolini, who thought his family was best left in the shadows, together with his serial sexual ‘conquests’. The Marinetti family was much more attractive and self-celebratory, but no one, not even Marinetti himself, tried to make of it a major element of regime propaganda. Perhaps Franco tried to do something similar after the Civil War, but he had only one daughter and his wife was no Magda Goebbels. One fine example of this familial self-projection is the film entitled Privata der Familie Goebbels. It is a sickly-sweet series of images, accompanied by tinselly music, apparently conceived as a birthday present for Goebbels who had other engagements. The children play fairly aimless games and then pretend to form an orchestra. At table, Magda administers food and medicines with ease and efficiency. She looks more like a grandmother than a mother – the continual child- rearing had aged her considerably. The whole is aimed at female consumers, brought up in the great tradition of German Schmaltz.

Another important element in this story regards the strange triangle Hitler–Magda–Goebbels, the precise conformation of which has never fully emerged. Although Hitler had theorised – perhaps as a way of exorcising his difficulties in this field – the figure of the Führer as being necessarily without family, he was nevertheless very happy to be an adjunct part of the Goebbels family. His relationship with Eva Braun was not one for public consumption, but Magda Goebbels could play another role, both public and asexual. She was quintessentially ‘Aryan’, charming and elegant, witty and diplomatic. She was also, like her husband, utterly devoted to Hitler. At the time of her marriage she was one of very few women – Winifred Wagner was another – who lent respectability to what was widely and justly perceived as a party of thugs. Hitler greatly appreciated her company, both in public, at diplomatic functions and the like, and in private in her large flat at no. 2 Reichskanzlerplatz in west Berlin. Not by chance did she come to be called in some circles ‘the first lady of the Third Reich’, a role of which Goebbels thoroughly approved and a label that still sticks today. At the same time, she assumed the idealised role of ‘Reich mother’. The combination was a considerable achievement, in part the invention of Goebbels, in part her own creation. Bella Fromm, the Jewish Berlin society journalist who fled the country in 1938, recorded meeting her for the first time: ‘Tonight at the ball, Magda was lovely. No jewels except the string of pearls around her neck. Her golden hair owes nothing to any drugstore or chemist. It, too, is real. Her big eyes, iridescent and ranging from dark blue to steel grey, radiate icy determination and inordinate ambition.’

In Berlin, Magda pushed hard for a senior post in the Nazi Party, wanting very much to find a public as well as a domestic outlet for her considerable talents. She met with a brick wall. Hitler considered women, even Magda Goebbels, to be adornments in a male world. A woman’s place was in the home. Goebbels echoed his leader: ‘Struggle is a matter for men; the woman’s role is to be a mother. The mother is the symbol of the future and of fertility; she is the law of life and of the community of fate.’ In July 1933 they were in Bayreuth for the Wagner festival. They quarrelled bitterly but Hitler came to the rescue once again: ‘Hitler is staying in a very small house. We have coffee there at night. He makes peace between Magda and me. A true friend. But he agrees with me all the same: a woman’s place is not under the political spotlight.’

Extract taken from ‘The Greater World and the Smaller One’: The Politics of the Family in Germany, 1918–1945, Chapter 5 of Family Politics. 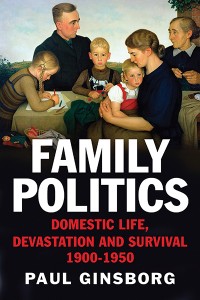 ‘There are certainly emotional responses to the natural world in his paintings, often because of the sheer thrill…