On 9th October 2014 Patrick Modiano became the 107th winner of the Nobel Prize for Literature. Peter Englund, the Nobel Academy’s permanent secretary, announced from Stockholm that Modiano had won ‘for the art of memory with which he has evoked the most ungraspable human destinies and uncovered the life-world of the occupation’. As a popular author in his native France, Modiano gained notoriety for his haunted and pared-down style of writing. Common themes in his work have included Jewishness and the question of personal identity.

This winter, Yale University Press will publish a new English translation of his collection of novellas Suspended Sentences, which showcases some of his finest work. John Donatich, Director of Yale University Press commented from the Frankfurt Book fair: ‘all Modiano’s works have the same atmosphere. They are sad, nostalgic works covering the post-war period – tentative, tenuous pieces full of atmosphere of things being lost, as if you are seeing the world through gauze. They are full of deceptively simple sentences that hide emotionally complex novels’.

Suspended Sentences: Three Novellas brings together three works – Afterimage, Suspended Sentences and Flowers of Ruin – to form a single, compelling whole. Modiano draws on his own experiences, blended with the real or invented stories of others, to present a kind of autobiography, but one that is also the biography of a place. Orphaned children, mysterious parents, forgotten friends, enigmatic strangers – all appear in this three-part love song to a Paris that no longer exists.

Suspended Sentences has been translated by Mark Polizzotti, director of the publications programme at The Metropolitan Museum of Art, New York. Polizzotti has previously translated over 40 books from French to English.

Patrick Modiano will be joining an illustrious line-up of authors, published as part of Yale’s Margellos World Republic of Letters series.
You can read more about the new translation of Suspended Sentences here. 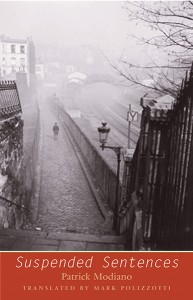