In February 2014, Andrew Wilson, Senior Policy Fellow at the European Council on Foreign Relations and author of Ukraine Crisis: What it Means for the West, arrived in Kiev in the midst of a revolution. He recalls his experiences from this period with powerful photographs of the events that unfolded, leading to the worst period of violence Kiev had seen in 70 years. In just a few days at least 88 people were killed by uniformed snipers and President Yanukovych was overthrown and found to have fled to Russia (later claiming to still be President).

Through this deeply personal account, Wilson writes about his brief encounter with President Yanukovych, his experience amongst the protestors on the street, and his journey home to London (where he was asked to brief the Prime Minister at number 10 Downing Street).

I have been a regular visitor to Ukraine since 1991. When I made my first trip that summer, I was still a PhD student, Ukraine was still part of the USSR; I was paraded on TV as a novelty foreigner the day after I arrived – which was nice. In August the attempted coup in Moscow led to Ukraine’s historic declaration of independence – which was scary at first, and then memorable once again.

Twenty two largely disappointing years later (for Ukraine), in November 2013, I was in Kiev for a local meeting of the World Economic Forum. The speeches were all eminently forgettable – all fake promises about Ukraine’s ‘European destiny’. What I do remember was that President Yanukovych and his ministers even walked like gangsters – a friend was given looks that could kill for accidentally interrupting his parade to the podium. Two weeks later Yanukovych broke his promise to sign a key agreement with the EU and the protests against him began.

So by February it was time to catch up. It was clear that events were heading for some kind of dénouement, but no one could know exactly what. So university half-term seemed the perfect time to go: which it was; but not for reasons of convenience, as I arrived in the middle of a revolution – an old-fashioned civic uprising of an entire city. Tuesday 17 February was like Paris in 1832 (for fans of Les Misérables ) or 1848. This is my favourite picture from that day, taken on Institutska Street, leading up from the Maidan towards parliament, from where the protestors had just been driven back (the ‘Maidan’ is Kiev’s central square, where the protestors were encamped). The cobblestones, long a symbol of revolution, are being torn up. Young men are throwing them at the militia. But they are being supplied by a human chain of ordinary citizens, with an elderly woman at the front, who looks remarkably like my own mum. She has stuck the colours of the Ukrainian flag on her coat, and still seems to have her shopping in a plastic bag. 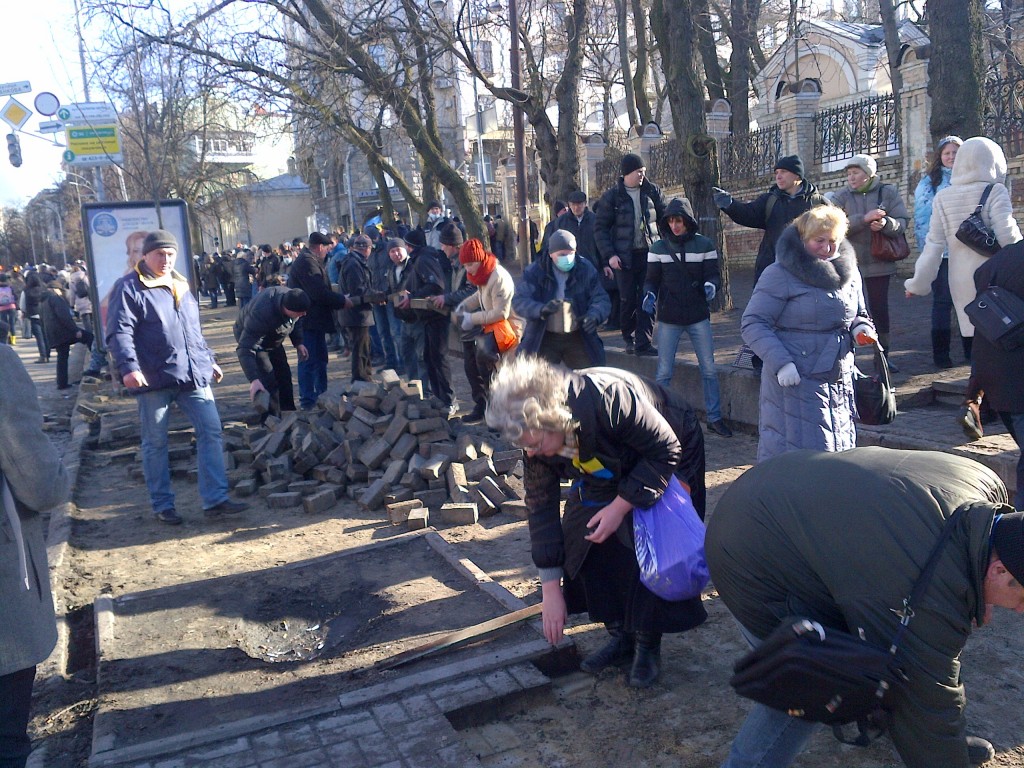 By Thursday lunchtime the violence had reached a peak. This was when I was booked to go home. Part of me wanted to stay, but boring old comfort and security were also very tempting. This is what Kiev looked like when I left: 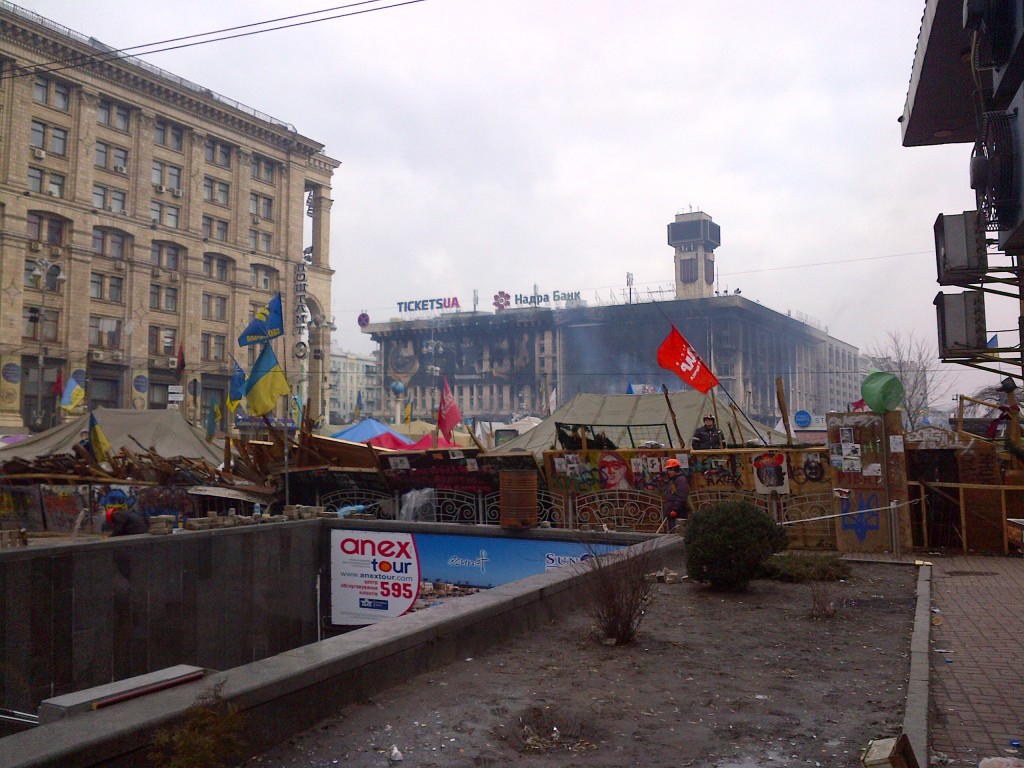 This picture shows the Maidan from the main street Khreshchatyk, normally bustling with shoppers. In the middle, in the distance, is the Trade Union building, formerly the demonstrators’ headquarters, burned down on Tuesday night. You can see that the Maidan’s ‘defences’ are not so formidable, as they are made of park benches and bits of old furniture.

The shooting came down into the Maidan from round the corner to the right; ironically from Institutska Street only yards from where the old lady had been picking up the cobblestones on Tuesday. Though this was coldly logical. On Tuesday the protestors were advancing towards parliament. On Thursday the snipers who killed them had come in the other direction from the government buildings where they had been hiding.

This was up the hill from the main square, which is why everybody, including me, have been forced to the edges. The building on the top left is the Post Office. The two bare-chested guys pictured below with the Cossack hats were outside, beating their kettle drum, as the wounded were dragged past them. One of the fighters takes a breather to the right of the picture, looking back exhausted at the Maidan. You can see how home-made his ‘uniform’ is. His weapon is a stick. More cobblestones lie in the background. 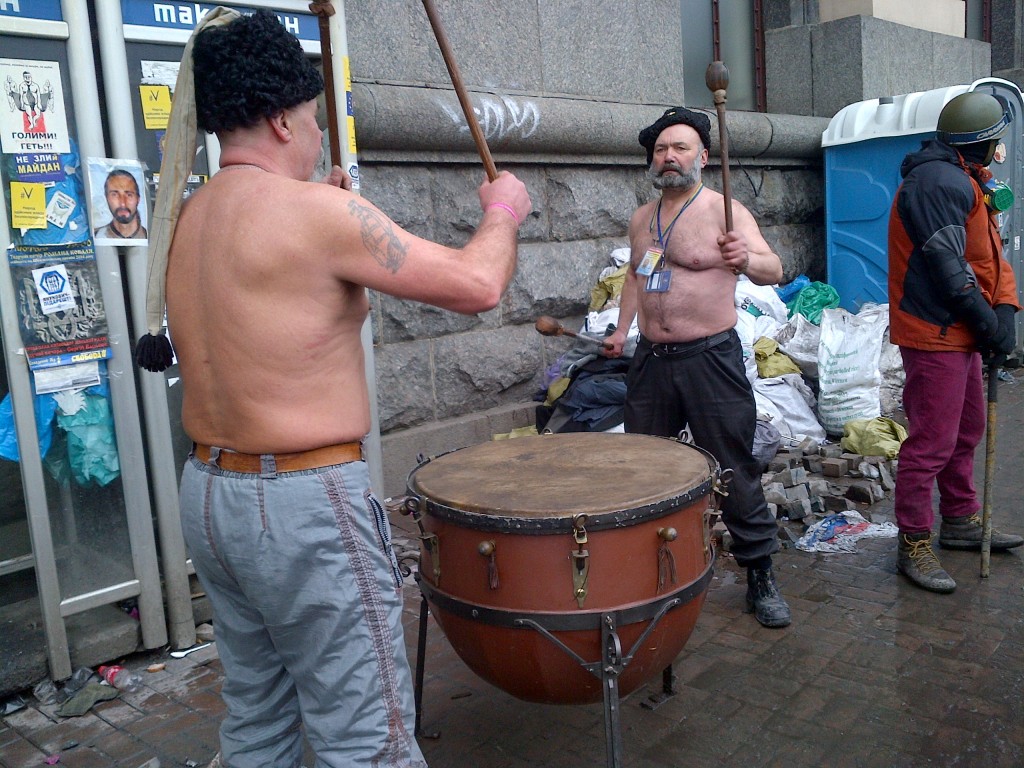 I didn’t know whether the roads were open (the ones in the centre obviously weren’t – Khreshchatyk is the main one). I didn’t know if the airport was working as normal. I was rather relieved by the normality when everything worked as normal, though the airport was like the Marie Celeste. But by the time the plane landed in London, Kiev’s two airports were being picketed by the demonstrators, to stop more bad guys from fleeing. That was how quickly the situation flipped.

So I decided to write this book. It should be dedicated to the old woman on Institutska Street and the hope that the Kiev martyrs, the so-called ‘Heavenly Hundred’, didn’t die for nothing. But I also wrote the book because the euphoria was over within a week, when Russian proxies staged a coup in Crimea. Two months later something similar, but infinitely bloodier, was attempted in Eastern Ukraine. Three thousand were dead, including the 298 passengers and crew of Flight MH17, shot down over the Donbas. If Ukraine’s second attempted revolution in ten years (the original ‘Orange Revolution’ was in 2004) was to fail because it was strangled at birth by outside forces, the consequences for the whole of Europe would be catastrophic.

It was clear that this was far from the end of the story and there was plenty more than just Ukraine to write about. The book therefore also includes some thoughts that have been gestating for a while. It is also about the ‘Russia crisis’, and the pathologies that have been festering in Putin’s Russia for more than ten years. It is also a crisis for the West, and for the countries of the European Union above all. The demonstrators began by waving the European flag. If their very state was to be destroyed in response, what did that say about Europe? 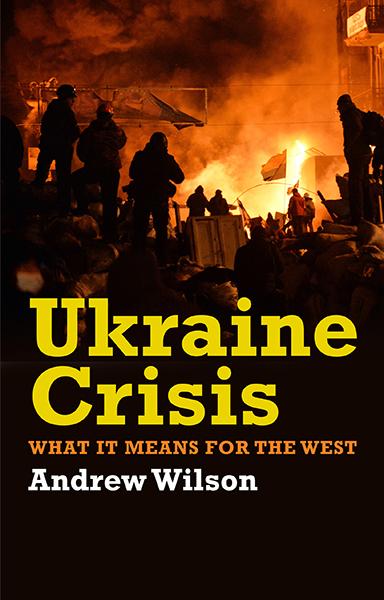