The Oxford Lieder Festival in autumn 2014 will celebrate song through workshops, talks and master classes, ‘bringing Franz Schubert’s Vienna to Oxford’ from 10th October – 1st November 2014. Yale’s new and encyclopedic Franz Schubert: The Complete Songs compiled by Graham Johnson is the perfect accompaniment to ‘The Schubert Project’, which promises to be the biggest ever celebration of the life and music of Schubert. To gain a greater understanding of  the interaction between words and music in the Lieder, and for a performer’s perspective, Yale interviewed author Graham Johnson about the ‘songs’ and his new definitive work on Franz Schubert’s vocal music.

Graham Johnson has written and edited this three-volume boxed set for Yale.  It includes song commentaries with parallel text translations (by Richard Wigmore), detailed annotations on the songs’ poetic sources, and biographies of one hundred and twenty poets, as well as general articles on accompaniment, tonality, transcriptions, singers and more. This richly illustrated encyclopaedia demonstrates the breadth of Schubert’s talent as a composer  in a ‘hands-on’ and personal manner that is unique to Johnson, a performer himself.

As Senior Professor of Accompaniment at the Guildhall School of Music & Drama in London, Graham Johnson plays recitals around the world. In April 2013 he was awarded the prestigious Wigmore Hall Medal ‘in recognition of his unstinting championing of Song and his extraordinary achievements on the concert platform and in the recording studio’. He is the first pianist ever to record all of Schubert’s songs and part-songs. 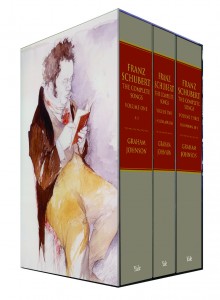 The Making of Modern Art – A Q&A with Michael Peppiatt

Chaotic, inventive, transgressive: Modernism is one of the most challenging yet exciting artistic movements in the history of…