The leading textile and design firm Watts and Co. has carefully reviewed its archive and has curated its first ever interior design exhibition at The Fashion and Textile Museum in Bermondsey, London. As part of Watts’ 140th Anniversary celebrations, the exhibition, ‘PATTERN: Watts Architects’ Wallpaper 1870 to Today‘, shows how wallpaper design has adapted over time. The rich history of ecclesiastical design helped inspire decades of wallpaper, revolutionising the way people thought about home furnishings. Fascinating aspects of the exhibition include sections on the Gothic Revival, a movement that changed the face of architecture.

George Frederick Bodley & the Gothic Revival in Britain and America by Michael Hall (published by Yale in October) serves as a wonderful accompaniment to the show, and is a  compelling commentary on ecclesiastical architect George Frederick Bodley (1827–1907) and his contemporaries. Bodley, who founded Watts and Company in 1874, was a major patron of William Morris’s stained glass and, like Morris, an accomplished textile and wallpaper designer. Bodley’s work is said to have fundamentally shaped the architecture, art and design of the Anglican Church throughout England and the world, with works still surviving in the United States, Australia, India and Italy, as well as the United Kingdom. In a seamless blend of architectural, art and church history, this volume features over 200 illustrations and offers impeccable scholarship on the work of an influential visionary of Victorian design.

Recently, we had author and editor, Michael Hall, in the office to choose the end papers and view the final design for the book. Here are some photographs from our instagram account. The final product will be available in early October.

You can find out more about George Frederick Bodley & the Gothic Revival in Britain and America here. 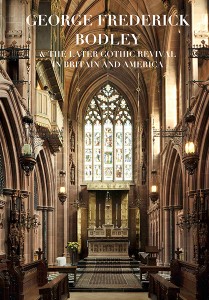 Michael Hall is a noted architectural historian and the author of several books on Victorian architecture and the Gothic Revival. He will be speaking at the V&A Museum on the 25th October 2014.

Today is INTERNATIONAL WOMEN’S DAY, an annual event held throughout the world aiming to inspire women and celebrate…