Adam Phillips’ Becoming Freud is a biography that explores the life of the young Freud, spanning his first fifty years, and ironically incorporating Freud’s own misgivings about the art of biography. Phillips describes Freud’s use of psychoanalysis as a way of coming to terms with the fate of Jews in Europe, and looks at how verbal storytelling can be seen as a key feature of a ‘talking cure’. Throughout, Phillips charts the development of Freud and psychoanalysis in skillful and unconventional ways.

Adam Phillips talks to Yale about a new biography of Freud:

In this video interview Adam Phillips explains the process of working on Freud’s biography – exploring what biography meant to Freud, as well as thinking about his own attitude to the genre, as analyst and writer. He also touches on how Freud’s creative and literary aspects intersect with his scientific method and Jewish sensibility.

Formerly Principal Child Psychotherapist at Charing Cross Hospital, London, Adam Phillips is now a psychoanalyst in private practice and author of many books – Becoming Freud is his eighteenth. He is also a visiting professor at the University of York and was general editor of the Penguin Modern Classics translations of Sigmund Freud. He was named by the New Yorker ‘Britain’s foremost psychoanalytical writer’. 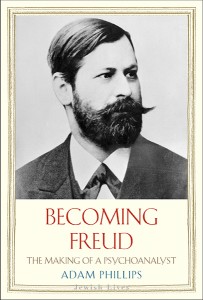 Becoming Freud is part of Yale’s ‘Jewish Lives’ series. Other titles in the series include Jabotinsky: Zionism’s Samson by Hillel Halkin, the forthcoming Mark Rothko by Annie Cohen-Solal and Leon Trotsky: A Revolutionary’s Life by Joshua Rubenstein.

The Sunday Times says: ‘This short meditative book succeeds superbly in delineating the culture and thought processes that lay behind his work.’

The Telegraph notes:  ‘The book’s structure is bound by two constraints: the brevity of the period covered – the first 50 years of Freud’s life (he lived until he was 83) – and his Jewishness. But, as with Shakespeare working within the strictures of the sonnet form, Phillips presses these potential limits to acute and dazzling effect.’