The 15th of August was the first day of the seminal Bauhaus exhibition of 1923. Described by Michael Kater as ‘the most important cultural event in Weimar since the death of Goethe’, the exhibition solidified the Bauhaus aesthetic as an international presence. Michael Kater’s book Weimar: from Enlightenment to the Present is a chronicle of the rise and fall of an iconic German town. Weimar has a unique place in German history: cradle of German culture in the Enlightenment, and later the capital of Germany’s first, short-lived, democracy. The home of Johann Wolfgang von Goethe, as well as of Schiller, Liszt and Strauss, the city later housed the fledgling Bauhaus school, until it was forced to relocate to Dessau due to political pressure from the city’s increasingly right-wing administration. This dichotomy between progressive and reactionary elements seems to run through Weimar’s history until 1929, when the city became a centre of Nazism, a transition time depicted in the musical Cabaret. Only a few years before the city had been host to forward thinking movements, exemplified by the Bauhaus exhibition. Find out more in the following extract.

Starting in 1922, Masters and students toiled to get the Bauhaus exhibition ready, which was to last from August 15 to the final day of September, 1923. What transpired during those six weeks in retrospect must be judged as the most important cultural event in Weimar since the death of Goethe and never equalled again in the twentieth or twenty-first century. Seldom had the town seen such a collection all at once. It seemed like its decades-old quest had been fulfilled. If only those moments had lasted. There were lectures, concerts, theatre and film presentations, the exhibition of artefacts and a model single family house. In an opening lecture on August 15, Gropius announced the new programme of a union between art and technology under an eponymous heading: Kunst und Technik – eine neue Einheit. Kandinsky, Russian artist and author, followed this up with a talk on ‘synthetic art’. Employing the Stuttgart dancers, Albert Burger and Elsa Hötsel, Schlemmer introduced his Cubist-influenced Triadic Ballet, at the Weimar theatre. There was much music: the young composer Hans Hein Stuckenschmidt, later to become the preeminent music critic of the republic, participated in a ‘Mechanical Cabaret’, for which he had composed an avant-garde music score inspired by the Dada movement. Gropius succeeded in inviting the elite of modernist composers in Europe, Ernst Krenek, Igor Stravinsky, Ferruccio Busoni, and Paul Hindemith, to perform their latest compositions; pioneer Hermann Scherchen conducted. Hindemith premiered his Marienlieder, Stravinsky had his L’Histoire d’un soldat performed and was surprised to find that the previously sceptical Busoni liked it; the two men parted as friends.

Works of every Bauhaus Master, as well as of students, were exhibited in the Weimar Landesmuseum. Thirty architects from around the globe congregated in Weimar in August, among them Erich, Frank Lloyd Wright, and Le Corbusier. Altogether 1,500 visitors made the trip, many from abroad. By and large, the happenings were met with a positive German press; predictably, nationalist papers condemned them. The exhibition was a portent of the Neue Sachlichkeit, the New Objectivity, which spelled doom for Romanticism and Expressionism, and which was then beginning to show itself in the music of Hindemith and Stuckenschmidt, as well as in other German art forms such as cinema, where Fritz Lang’s 1927 masterpiece Metropolis symbolised the triumph of a new technology. By that time, the Bauhaus was a central part of this.

By way of an excursus, one should emphasize the 1923 exhibition as an international catalyst. The exhibition helped to develop international contours for the Bauhaus, which came to be pronounced decades later, when the German Gropius would be mentioned in the same breath as his world-famous colleagues, the American Frank Lloyd Wright and the Swiss Frenchman Le Corbusier. The cosmopolitanism represented by the founding faculty – the Swiss Itten and Klee, the Russian Kandinsky, the American Feininger, the German Marcks and Gropius and later also the Hungarian Moholy-Nagy – was reinforced early on by the presence of foreign students, especially from Austria, Poland, and Hungary, not to mention polyglot Jews from all over Central Europe. Non-German artistic styles also made inroads in the Bauhaus, such as the Dutch De Stijl, Cubism from France, and Constructivism from Russia. Signally, the Bauhaus’s international flair became institutionalised around the middle of the twentieth century, through Gropius’s directorship of the architecture department at Harvard and Moholy- Nagy’s founding role in the Chicago School of Design, later to become part of the Illinois Institute of Technology. In Germany, as a monument to the anti-Nazi martyrs Hans and Sophie Scholl and in the spirit of a new beginning, the Hochschule für Gestaltung was founded in Ulm, with the help of Gropius and with Max Bill, an ex-Bauhaus student, as rector. It was a legend in the late 1960s when it had to be closed for lack of funds.

Back in the 1920s, although most Thuringian politicians for the time being were mollified and willing to support the Bauhaus further, the right-wingers among them continued their campaign against what they regarded as excrescences of the modern age. They could point to the fact that, financially, the displays and performances had not been successful; just 4,500 inflation-resistant gold marks had been earned by a sale of artefacts. It is true that after autumn 1923 the Bauhaus concentrated on the design of products that were beautiful to look at and actually useful in daily life, such as Wilhelm Wagenfeld’s table lamps, Gunta Stölzl’s hand-woven carpets and Marcel Breuer’s chairs. The Bauhaus developed a typographical series, in which the practical-minded Moholy-Nagy was instrumental, and which from an aesthetic point of view was sublime. But the portfolios entitled ‘New European Prints’ needed a mass publisher, and the German competition in prints was severe. Where were the outlets for other designs and products that lent themselves to industrial production of one sort or another, such as mural painting, stone sculpture, or wood-carving, to which the workshops now dedicate themselves? The Bauhaus had given up some of its esoteric principles for the sake of applicability and everyday utility with a view to future industrial manufacture. Although much here was impressive, it was too little too late. Come 1924, the Bauhaus would fall on extremely hard times.

Taken from ‘The Weimar Bauhaus Experiment’, chapter 5 of Weimar: from Enlightenment to the Present 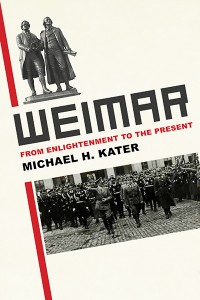 Q&A with Nick Morley, illustrator of A Little History of Poetry

Each book in our Little Histories series is illustrated by a different contemporary artist-illustrator, whose specially commissioned work…