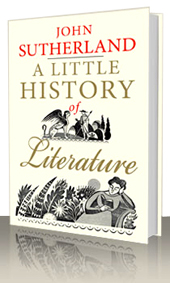 John Sutherland’s ‘Little History’ tackles a very big subject: the glorious span of literature from Greek myth to graphic novels, from The Epic of Gilgamesh to Harry Potter. Sutherland introduces great classics in his own irresistible way, enlivening his offerings with humour as well as learning: Beowulf, Shakespeare, Don Quixote, the Romantics, Dickens, Moby Dick, The Waste Land, Woolf, 1984 and dozens of others. He adds to these a less-expected, personal selection of authors and works, including literature usually considered well below ‘serious attention’ – from the rude jests of Anglo-Saxon runes to The Da Vinci Code. With masterful digressions into various themes – censorship, narrative tricks, self-publishing, taste, creativity and madness – Sutherland demonstrates the full depth and intrigue of reading. Most of us encounter literature, in one form or another, at an early age. Stolen moments reading by torchlight when bedtime has long since passed are a familiar memory to many, and the relationships that are formed with these early books can last a lifetime. Just as we grow up, so our understanding of literature grows as well. In this video John Sutherland elaborates on the ethos and literary philosophy that informs his writing.

‘As a guidebook, it’s a cracker. What Sutherland has to offer is formidable breadth of reading, a generous spirit and a rebounding enthusiasm for his subject.’ – Sam Leith, Spectator

The life of a chameleon: Extract from Nigel Smith’s acclaimed biography of poet Andrew Marvell