‘One of the best friendships that has ever been between two painters’:
The Scottish Colourists S. J. Peploe and J. D. Fergusson

S. J. Peploe (1871-1935) and J. D. Fergusson (1874-1961) are two of the four artists commonly referred to as ‘The Scottish Colourists’. Along with F. C. B. Cadell and G. L. Hunter, they are Scotland’s best known and most loved twentieth-century painters. ‘S. J’ and ‘Fergus’, as they called each other, met in Edinburgh in about 1900 by which point they had both studied in Paris and established themselves in studios in the Scottish capital. They had begun sending to the annual exhibitions of the Royal Scottish Academy, the Royal Glasgow Institute and the Society of Scottish Artists, but neither had yet had a solo exhibition. From 1904 they spent the summers painting together in France before Fergusson decided to settle in Paris in 1907. Peploe joined him there in 1910 and they spent two years experiencing at first hand the birth of modern art. Peploe returned to Edinburgh in 1912 and never again lived in the same country as Fergusson. They remained close, however, and in 1945 Fergusson declared of their relationship: ‘it was, I think, one of the best friendships that has ever been between two painters.’

Peploe’s influence on the younger Fergusson when they first became friends is obvious in the still lifes, which they painted in the mid-1900s, such as The Black Bottle and Jonquils and Silver. These works reveal a shared interest in artists including Edouard Manet and Diego Velázquez. Peploe went on to become renowned for his paintings in this genre, whereas Fergusson’s reputation came to rest on his depictions of the female form.

The summers spent painting side by side between 1904 and 1907, working ‘en plein air’ in the Impressionist manner, had a significant effect on Peploe and Fergusson’s work. For both artists, a disciplined, formal studio practice based on a sober palette, gave way to a looser, more spontaneous approach based on a lighter, creamier range of oils. They worked their way along the Normandy coast, stopping at places such as Berneval, Etaples and Dieppe. Whilst visiting the latter in 1905, Fergusson captured the Bastille Day celebration fireworks in Dieppe, 14 July 1905: Night, a painting which paid homage to James McNeill Whistler and also to his friend, who appears as the figure in grey to the left.

It took Fergusson three years, from 1907 until 1910, to persuade Peploe to join him in Paris. Having absorbed the latest developments in French painting at first hand, including the work of artists such as André Derain and Henri Matisse, it was then Fergusson’s turn to influence his older friend and both were elected Sociétaires of the progressive exhibiting society the Salon d’Automne. Fergusson recalled: ‘We were a very happy group … we used to meet round the corner table at Boudet’s restaurant … When we couldn’t pay we did our signed and dated portraits on the back of the bill … We were all very excited with the Russian ballet when it came to Paris. [Léon] Bakst … used all the ideas of modern painting for his décor. [Sergei] Diaghilev made a triumph, surely even greater than he had hoped for. No wonder S. J. said these were some of the greatest nights of his life. They were the greatest nights in anyone’s life.’

In 1912, Peploe returned to Edinburgh with his wife Margaret and their son Willy, where they lived until Peploe’s death in 1935. Desiring ‘more sun, more colour’, Fergusson moved to the Cap d’Antibes in 1913, the year in which he met the dance pioneer Margaret Morris, with whom he began a life-long personal and professional relationship. Fergusson lived in London from 1914 until 1929 before returning to Paris until the outbreak of World War Two. Fergusson and Morris then settled in Glasgow, where he died in 1961. The two painters kept in touch for the rest of their lives, but the intimacy of the pre-World War One years was never re-captured.

Peploe described his bond with Fergusson to his wife: ‘With Fergusson I am bright and witty – I keep him in a continual state of laughter … whenever we meet, I tell you, we have a really lively time. I know what he gets from me – I stimulate him, excite him. And I get from him a strength and a cheerfulness which when alone I do not possess.’

Fergusson in turn declared that his relationship with Peploe was: ‘A happy unbroken friendship between two painters who both believed that painting was not just a craft or profession, but a sustained attempt at finding a means of expressing reactions to life in the form demanded by each new experience.’

About  curator and author Alice Strang:

Alice Strang is Senior Curator, Scottish National Gallery of Modern Art, Edinburgh (part of the National Galleries of Scotland), and was the curator of the retrospective The Scottish Colourist Series: S. J. Peploe which was held at the Scottish National Gallery of Modern Art, Edinburgh, 3 November 2012 – 23 June 2013: ‘One of the best exhibitions of the year’ – The Scotsman. She also curated The Scottish Colourist Series: J. D. Fergusson which was held at same gallery, 7 December 2013 – 15 June 2014. Selected works have travelled to the Pallant House Gallery, Chichester, for a show from 5 July – 19 October 2014 (a partnership project between the National Galleries of Scotland, Edinburgh and The Fergusson Gallery, Perth & Kinross Council).

Find out more about S. J. Peploe by Alice Strang: 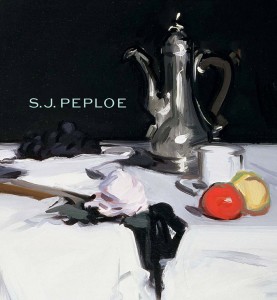 Founded and built by the industrialist and philanthropist William Lever, 1st Viscount Leverhulme, in 1922, The Lady Lever…