To coincide with the historical festa del redentore in Venice on July 19th-20th, we’ve prepared a blog that looks at a different take on the famous city.

R.J.B. Bosworth’s new book Italian Venice: A History explores the ‘dark underbelly’ of the fairy tale city. Once romanticised by artists and writers alike, Bosworth takes a closer look at the implications of the ‘Disneylandification’ and neo-liberalism symptomatic of the 20th and 21st centuries. In this elegant book, historian Bosworth explores Venice—not the glorious Venice of the Venetian Republic, but from the fall of the Republic in 1797 and the Risorgimento up through the present day. From Fascism, to flooding, to tourism – Venice, he shows, is a city where its histories as well as its waters ripple on the surface.

Here is an extract from Italian Venice: A History addressing 21st Century commercialism and the potential affect on the city’s greatest landmarks.

So is Venice today a city in which internationalised luxury leisure and richly privatised global academic research have buried past madness? Can the developments on San Clemente and San Servolo rebut cheap talk about death in and of Venice? Perhaps. But a better site for contemplation of the effects of contemporary neo- liberal hegemony, and of Venice’s place within it, is Piazza San Marco itself, a square where the class wars of the first half of the twentieth century have indeed lost traction. There, for some years now, the great buildings have been regularly festooned with hoardings advertising expensive watches and other fashion accessories, perfumes, stylish clothes, motor cars and food products of questionable environmental and health benefit, the capitalist present thereby blotting out direct viewing of the glories of the Republic, let alone exploration of the social conflicts of Liberal and Fascist Venice. The justification for such an intrusion is the familiar one of the bottom line. As any student of the city must concede, historic sites require expensive upkeep and restoration, and Venice more than others. In turn, Venice’s fame, its history and beauty, mean that the Comune has something to sell and business something to buy. As a spokesperson of Coca Cola explained with specious virtue to the New York Times in 2010, when the façade of the Palazzo Ducale was hidden by its image: our company has ‘chosen to advertise [there] . . . not just to help promote our brand, but because it would also help preserve some of the city’s culture. When we advertise, we are always conscious of local artistic and cultural heritage.’

A seductive image can be reinforced by up-scale entertainment. In September 2006 Bulgari executives held a dinner for their 160 top clients in the Palazzo Ducale, with Cacciari, back in office and proving ever more adaptable to the hegemony of the market, the guest of honour. Paolo Bulgari then spoke for business, hailing Venice as ‘a city that is alive and international. It is rich in history and culture. It is a matter of great pride for me to be able to make one of its most precious symbols stand out again in renewed beauty.’

Scholars did not demur. As if on cue, the American early modernist Thomas Madden composed a neo- liberal history of the city, arguing that, from the very beginning, Venetians had been ‘businessmen through and through’. Throughout the Republic’s story, he pronounced, ‘entrepreneurs’ had received backing from ‘their pro- business government’; together, ‘freedom and free enterprise . . . built a wonder’. Venice was ‘a birthplace of modern capitalism’. It was also a city ‘com’era e dov’era’. According to Madden, ‘by 1700 Venice looked much as it does today’. It had even made ready for tourists. Republican Venice ‘was not only a vibrant city, it was a museum. And many people came to marvel at its exhibits.’ By contrast, in Madden’s account, the travails of Italian Venice after 1866, and any contemporary history, deserve slight analysis, although he did enthuse that, from 1945, ‘American perspectives on Venice would play a prominent role in shaping the city and its image. . . . To name even a few influential Americans in Venice is to leave out thousands.’

In sum, through such scholarship, and as is made evident every day in Piazza San Marco, neo- liberalism is presently as dominant in the local setting of Venice as it is throughout the globe, perhaps more so, if, as Madden, Coca Cola and Bulgari executives contend, the city and the market go together like love and marriage. What might be more debatable is whether the promised advantages of marketisation have trickled down into the lives of the people of Venice, or whether, rather, a hint of madness and the nearness of death still hangs over the city, and not merely at the ex- asylums of San Clemente and San Servolo. How, it must be asked generally, have Venice and its complex pasts and memories dealt with what Francis Fukuyama labelled ‘the end of history’, the acceptance in our present era that a sole economic model and a sole political system have been and are viable? Is neo- liberalism enhancing or fretting beauty and history as it imposes its changes on Venice? Can a city that has long cried out for protection, where ‘middle- class welfare’ has habitually been extended to patricians and the super- rich, really yoke itself to the pure market? 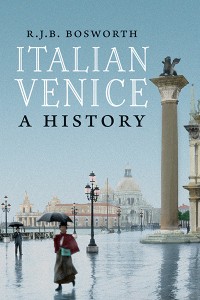 R. J. B. Bosworth is a senior research fellow at Jesus College, Oxford. He is also the author of Whispering City: Rome and Its Histories.

October is the month of Halloween so our theme for this month’s Staff Pick is Magic and Witchcraft….