‘A mind for ever voyaging through strange seas of thought, alone…’ – William Wordsworth, The Prelude

The metaphor of science as a voyage of discovery is a popular one, and central to David Knight’s book, Voyaging in Strange Seas. An ambitious survey, that invites its readers along for the great voyage of discovery that ushered in the modern age, Voyaging in Strange Seas uses the global oceanic voyages of the Age of Discovery to locate and map the Scientific Revolution, a new empirical world view focusing on observation, experimentation and mathematical reasoning. David Knight takes in a wide breadth of topics and characters; from Galileo and Tompion to paper astrolabes and hydrostatical paradoxes, and he populates his narrative with interesting characters and fascinating anecdotes. In this YaleBooks  interview with Professor Knight, the author discusses some of the influences on his book and considers the changing nature of science through history.

An interview with Professor David Knight:

YaleBooks: Voyaging in Strange Seas is an evocative title and suggests boundless mysteries. Why did you choose it?

David Knight: William Wordsworth chose it, describing the mind of Isaac Newton. He saw Newton as a lonely voyager, but actually science is a social activity needing lots of people to keep it going, like a big ship. The sea voyages that revealed a brave new world, undreamed of by the Greek and Roman authors admired in the Renaissance, made Europeans aware that they had caught up and overtaken their predecessors: reliance on their authority was superseded by close observation, testing, and mathematics as the world and ideas about it were explored. But as the circle of light expanded, so the circumference of darkness grew – boundless mysteries still remain.

YB: Do poets like Wordsworth, playwrights, and other ‘unscientific’ writers help us to see how science was felt and viewed in their day?

DK :I’m sure they do. The word ‘scientist’ was invented in the 1830s, and before about 1800 few of the men and women who observed plants, animals, chemicals, islands and planets (and experimented on some of them) could make it their career. The scientific community was very porous and blurred around the edges. The majority of Fellows of the Royal Society, for example, were interested but not engaged in it. It was an excellent club for gentlemen curious about the world, and included grandees, lawyers, clergy, doctors and writers. They made science something to know about and talk about: some mocked absent-minded professors, others were bowled over at the new world being opened up before them. What might have been just a fashion became an important, deep and lasting part of western culture: curiosity became a virtue, though it was not clear to most people that one might devote one’s life to it.

YB: Who did support science, and why?

YB: What about conflicts with established religion?

DK: A better word to describe the relation of those pursuing science and the religious establishment is ‘engagement’: sometimes skirmishes, sometimes romance. My ‘long’ scientific revolution covers the same period as the ‘long Reformation’, when there ceased to be a single source of religious authority. Wars of Religion saw refugees and asylum-seekers fleeing especially to relatively-tolerant Holland and England, where some of them were extremely important in advancing science. Printers there, escaping censorship, circulated knowledge rapidly; and an immigrant in England had the great idea of publishing a scientific journal, with papers checked by a referee – an innovation crucial to the advance of science. Clergy played an important part in science: the Royal Society’s moving spirit was a Bishop Wilkins, and for many people science made God the Creator seem even more wonderful, though probably more distant. If humans were made in God’s image and likeness, then they could hope to understand the otherwise confusing and amazing world he had made: it was law-governed and did not depend on chance and contingency. There were, and are, not only questions of value that sciences do not answer, but subjective ones too: after hearing what disease we have got, we still want to go beyond viruses, genes and socio-economic status and ask why it is happening to me and how I can live with it.

YB: But a lot does depend upon chance: when did science come to cope with that?

DK: Overseas trade, fire-insurance and life-insurance, as well as the popularity of gambling games, led to the development of statistics so that by the end of our period the behaviour of large numbers of things or people could be handled mathematically, and seen to be subjected to laws of nature too.

YB: The ‘Voyage’ you describe began in 1492 and continued into the time of Captain Cook and George Washington. Has the whole nature of science changed since then?

DK: We have been looking at its youth, but it is still the same painfully self-correcting search for causes and laws, and for ways to improve human life; and there is much to be discovered. New species of animals and plants are being found; and now before they become extinct we have to turn to science and technology to try to reverse the damage for which they must bear some responsibility. But the ideal of public knowledge, an altruistic social activity in which the soloists are backed by a chorus of experts, remains. Around 1800, first in France undergoing political revolution, there was a genuine revolution in which over the course of a generation science began to become specialised, a realm of experts supported by an educational system, whose career would be spent in it, and whose work might need professional popularisers to get it across to the public who were paying for it. Teamwork has become ever more important: science is not a matter of solo yachtsmen. And just as the Spanish government sought to keep discoveries in the Americas secret, so modern governments and corporations would like dilute the idea of public knowledge.

YB: You began teaching history of science in Durham University fifty years ago: how do you see it differently now?

DK: I was then much more focused upon the great discoverers, the innovating original minds, and the ‘new philosophy’ of Bacon and Descartes. I would, fashionably, have concentrated upon astronomy, optics, and a certain amount of anatomy. There would have been more science in the book: equants, epicycles, ellipses and trajectories, refractive indices, fluxions and differential calculus, and much more detail about the work of Galileo, Huygens, Newton and their contemporaries. The book might well have run from Copernicus’ publication in 1543 to the death of Newton in 1727. While anatomy would have got in, there would have been much less natural history; and academies and societies would have featured largely as a background for the men of genius. While sensitive to charges of judging the past by the present (Whig history) I would have been less sympathetic to and respectful of past world-views, more conscious that I was telling a story of progress, and a little impatient of chemists (my degree was in chemistry) who seemed to lag behind the natural philosophers and delay their revolution to the late eighteenth century. I would have played down observation in admiration for logic, mathematics, theory and experiment. Science was a fully-human activity but it was difficult and often counter-intuitive.

Deciding what to leave out is taxing, and in this book I run the risk of writing history of science with the science left out. But I think that is closer to how it was, or looked. Among those I wouldn’t have mentioned, I see van Helmont, like Galileo imprisoned by the Inquisition, bringing some rigour through experiments into chemical processes long used by craftsmen; Moxon the printer, a refugee in the Netherlands, and then back in England disseminating science; Tompion, the blacksmith’s son who made the clocks for Greenwich Observatory and other instruments, flourished greatly, and was buried in Westminster Abbey; and his apprentice George Graham who made precision instruments used on land and at sea. My favourite instrument is the orrery, a mechanism in gleaming brass and steel simulating the motions of the solar system, for demonstration rather than research. Examples of these handsome evocations of the clockwork universe survive in museums, and one is shown in use in a famous painting by Joseph Wright. I dwell nowadays much more upon patronage and making careers, and have as well put in much more about medicine, religion, and warfare – and also the navigation, exploration, and trade that set the book’s limits and gave it its title. Science is a deeply-embedded part of our culture, not separable from the arts and humanities, and indicating how it became so has been for me well worth doing.

Voyaging in Strange Seas is available from Yale University Press 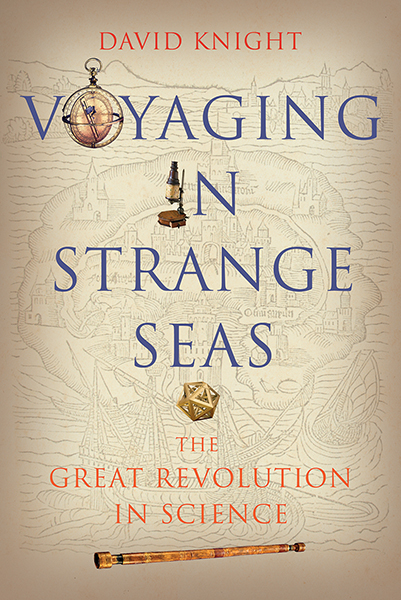