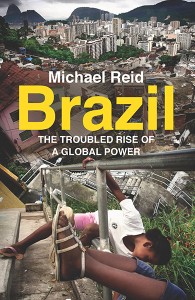 The FIFA World Cup begins today, with host country Brazil playing an opening match against Croatia. To coincide with the start of World Cup 2014 the Yale Books Blog presents an extract from award-winning journalist Michael Reid’s new book Brazil, a rounded portrait of a vibrant country about to take a commanding position on the world’s pitch – and the world stage.

Brazil has reached the World Cup final seven times, and won five of those matches, a record that no other country has equalled. But then again, it might be argued, no other country is as much affected by the game. Last time Brazil hosted the cup, in 1950, it proved to be a national humiliation  After Brazil seemed set for victory, scoring early in the second half, the entire nation looked on aghast as Uruguay scored twice in thirteen minutes to win the tournament. The Brazilians, who had already composed a victory song and engraved their players’ names on gold medals, did not take this well. 169 people at the stadium had to be treated for hysteria and 2 supporters committed suicide at the stands. The playwright Nelson Rodrigues summed up the match as ‘our Hiroshima’.  Anthropologist Roberto DaMatta was less hyperbolic, but still described the result as ‘perhaps the greatest tragedy in contemporary Brazilian history’. In this extract from his new book, Michael Reid examines the enduring influence o jogo bonito (‘the beautiful game’) has had on Brazilian culture and society.

Football, the family and other religions

If Brazil is indeed ‘the world’s most exciting nation’, as the Financial Times recently claimed, it is not just because of its geography but also because of its people, their culture and their increasingly vibrant democracy. What defines Brazilians? In the caricature, the answers would start with football, carnival and sex, and a tropical exuberance summed up by Carmen Miranda, a Brazilian singer who found fame in Hollywood partly by wearing fruit bowls as hats. Brazilians naturally resent being reduced to such stereotypes, though these indeed provide some clues to the national psyche and culture.

Start with football. It arrived in 1894, introduced by Charles Miller, the son of a Scottish railway engineer who is unknown in Britain but is a household name in Brazil, commemorated in statues and street names. Brazilians swiftly took to the sport, and became better than anybody else in the world at it. At their best – the national teams of the 1950s to 1980s – they played football as an art form, as o jogo bonito (‘the beautiful game’). Gilberto Freyre, an anthropologist and writer, thought that Brazilians played ‘as if it were a dance’, a quality he attributed to the African influence in Brazil. In fact, Brazilian football has often mixed magical creativity with a dour physical side (embodied in the team that won the World Cup in 1994). Football is perhaps the best example of Brazilians’ prowess at teamwork, noted by management theorists. But it has also become a powerful factor in Brazilian national identity. Success on the field has provided ‘a confidence in ourselves that no other institution has given Brazil to the same extent’, as Roberto DaMatta, an anthropologist, has written. And loyalty to a particular football club is a way of establishing a social identity. ‘Which club do you support?’ is one of the first questions strangers will ask of each other. Of all Brazil’s many religions, football is one of the strongest. The country shuts down completely on days when Brazil is playing in the World Cup, the streets of São Paulo and other cities falling eerily silent. Before the 2010 tournament, the workers at Embraer, the plane-maker, chose to work seven minutes more each day for several weeks in order to have time off to watch Brazil’s matches. It is the only country in the world whose national team is expected to win the World Cup as a right and an obligation – which will put the selecão under enormous pressure when the tournament is played in Brazil in 2014. Home advantage should help: no fans in the world are noisier or more passionate than Brazilians, both men and women. Though a minority of Brazilians have no interest in the sport, they are a silent one…

Taken from ‘The Brazilian Way of Life’, Chapter 2 of
Brazil: The Troubled Rise of a Global Power by Michael Reid

‘Michael Reid’s study of Brazil is a superb guide to a fascinating and increasingly important country. Reid combines the depth of knowledge of an academic, with a journalist’s story-telling skill.’ – Gideon Rachman, Chief Foreign Affairs Columnist, Financial Times

The Paleo Diet and Ancient Civilisation, by James C. Scott

In his latest work, Against the Grain, James C. Scott explores why humans abandoned hunting and gathering for…