Written by Professor of Military History John Buckley, Monty’s Men offers a radical reappraisal of the role played by British armed forces during WWII. This paperback edition is published to coincide with the 70th anniversary of the D-Day landings on 6 June 2014.

Anniversaries inevitably give rise to retrospection, and the sheer scale of the D-Day operation means that many have a personal interest in the story of the invasion.  John Buckley’s history of this event and the subsequent liberation of Europe, Monty’s Men, is a fascinating revisionist study of a campaign which demonstrates that the British Army was more than a match for the supposedly indomitable Wehrmacht. Featuring a large cast of colourful unknowns and grand historical personages alike, including Field Marshal Sir Bernard Montgomery and the Prime Minister, Sir Winston Churchill, Monty’s Men integrates detailed military history with personal testimony to create a compelling narrative, which understands and appreciates the British Army’s achievements in this war.

Winner of the Templar Medal for the Army Historical Research Society

Read an extract from the history of the D-Day assault in Monty’s Men below:

In the history of the Second World War, indeed of all warfare, the D-Day landings of 6 June 1944 hold iconic status. The story, retold many times and immortalised in films such as The Longest Day and Saving Private Ryan, and in the television series Band of Brothers, stands as perhaps the greatest Allied endeavour of the war to liberate Europe from the Third Reich. There is no doubt that the scale and the enormity of the task confronting the Allies in 1944 was an immense challenge. It called upon great skills in co-operative planning across and within services, institutions and nationalities to a degree the Axis powers could not possibly match, and represented easily the hardest military hurdle the Allies would have to clear in order to win the war.

Operation OVERLORD was a vast undertaking unparalleled in military history. At five points along the Normandy coastline Allied troops would storm ashore on the morning of 6 June – the Americans in the west on the beaches codenamed UTAH and OMAHA, and the Anglo-Canadians in the east at GOLD, JUNO and SWORD. To protect the flanks of the landing beaches airborne troops would be dropped on the night of the 5/6 June to seize key strategic points and sow confusion in the minds of the Germans. As the armies headed to continental Europe they would be supported by some 12,000 aircraft, 1,200 fighting ships and 5,500 landing and naval craft for the task. The whole operation was aided by an intricate deception plan and the co-ordination of many supporting services and arms.

For the British Army, D-Day in Normandy would also carry with it the burden of history, of past experiences both recent and distant, that shaped attitudes and defined levels of anxiety. Many recalled the disaster that was Gallipoli in 1915 and more recently Dieppe in August 1942, both amphibious assaults that had ended in failure and bitter recrimination. Even the more successful beach assaults in the Mediterranean such as Operation HUSKY, the invasion of Sicily in July 1943, at Salerno in September of the same year, and at Anzio in January 1944 had revealed and emphasised the dangers and predicaments of amphibious operations. Even as late as 28 April 1944 at Slapton Sands in Devon, Exercise TIGER, a small scale rehearsal for D-Day, had again highlighted the dangers of amphibious operations, when German E-Boats had got in amongst Allied ships. Yet much had also been learned from the previous years’ amphibious actions and subsequently incorporated into NEPTUNE, the assault phase of OVERLORD. It was of paramount importance that air supremacy be attained prior to the operation, and it was imperative that assaulting forces must not in any circumstance be pinned to the beaches.

JUBILEE, the failed Dieppe landings in 1942, had also taught important lessons. First, a direct assault on an urban area from the sea was too dangerous, and secondly, armour was required to be part of the initial assault to provide close direct fire support on the beaches, offer rallying points for troops, and help overcome enemy obstacles and strong points. A range of specialised armour had been designed for D-Day, the AVREs (Armoured Vehicles, Royal Engineers), all equipped with small portable bridges, mine clearance machinery, and bunker busting explosives. The British had also introduced amphibious swimming tanks (Duplex Drive Shermans) to allow them to land directly onto the beaches for immediate close support.

The scale of the build-up of forces in the south of England resulted in many compromises in accommodation and lingering problems of boredom, both sometimes sources of disgruntlement for the troops.[ii]  Many were billeted in tents set in damp woods and forests, and in between exercises there was little to do. Beer was in short supply and a pub with a stock was soon inundated with soldiers in search of fun and relaxation. By May many soldiers simply wanted to get on with the job of the ‘second front’ and bring an end to the waiting; they viewed the forthcoming campaign with trepidation, but if they had to do it they preferred to get on with it sooner rather than later.

Frustration mounted as in late May a series of test embarkation exercises took place causing excitement and alarm with soldiers and civilians alike along the south coast of England, only to turn to grumpiness when the orders came to return to barracks. Trooper Duce, 8th Hussars, 7th Armoured Division:

We had one false alarm at the end of May when we were paraded in Battle Order and marched down to the seafront to our respective vehicles with the intention of moving off, but after having mounted up and kept hanging about for orders it was suddenly cancelled. So we went back to our billets.

For the troops in the assault wave the pressure was even more acute. Lieutenant Colonel Moulton, 48 Commando:

We could certainly do with some more training but we could never recapture the old intensity; there is a limit to the time you can train the way we had been doing, and the tension would now be snapped – better to go and have it over.

When the orders were eventually issued on 3 June to begin assembling for D-Day, planned for two days later, the mood shifted to one of tension born of anxiety, in many cases heightened by inexperience of battle. Many were already embarked and at sea when the orders came through the following day postponing the invasion by twenty four hours due to the inclement weather. Reactions naturally ranged from relief to frustration. Lieutenant Holbrook commented:

There was nothing more the men could do. They felt a depressing sense of flop. They tried to rest, but were anxious and downcast.

The following day the invasion was back on having received Eisenhower’s go ahead despite the still less than favourable weather forecasts. It had been a difficult decision and a calculated risk for Ike, the Supreme Commander, but with little likelihood of a dramatic improvement in the conditions before the tides forced a postponement of some weeks he had few realistic options.

As troops headed out into the Channel or clambered into their transport aircraft ready for airborne assaults, they were experiencing a range of emotions. Captain Douglas Aitken, medical officer with 24th Lancers, noted in his diary:

We are on our way.

Taken from “Bridgehead: The First Step to Liberation”, chapter 3 of Monty’s Men by John Buckley. 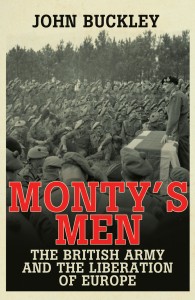 Competition time! How must a nonfiction writer imagine facts, vivifying them to bring them to life? How must…