Disease and commerce are among the most powerful forces that have shaped the modern world. They are also closely intertwined: over many centuries trade has been the single most important factor in the spread of diseases throughout the world. In his pathbreaking book, Contagion: How Commerce Has Spread Disease, Mark Harrison provides the first major historical study of contagious illness and commerce. Beginning with the plagues which ravaged much of Eurasia in the fourteenth century, Harrison charts both the passage of disease and measures taken to prevent it.

In this article, Yale author and regular blog contributor Lyric Hughes Hale reflects on Harrison’s work and considers the consequences that contagions could have on the global population.

Physician, do no harm. The same caution should be applied to philanthropists, public officials, and the well-meaning forces of globalization. In the realm of health care, quite ironically avoiding risk for a single event could actually lead to a worse outcome overall. This is partly because we as humans are neurologically wired so that we are not very good at predicting risk, often minimizing the danger of the innocuous and maximizing the drama of the highly unlikely. Moreover, our scientific knowledge is imperfect and interlocking systems too complex to be certain of outcomes in global public health. In an emergency, governments don’t always make rational decisions.

Politics is often the decider. As citizens, we expect our governments to provide stability and protection. Disease is often blamed on poor governance at some level. This week, the Saudi health minister was sacked because of a recent outbreak of MERS, or Middle East respiratory syndrome. Exactly what Abdullah al-Rabeeah could have done to prevent the outbreak is unclear, but with the Hajj season looming, it was probably expedient to make some sort of definitive gesture to instill confidence as two million pilgrims begin their voyage to Mecca.

The role and efficacy of government in containing disease varies by country. However in a world of near-instant transportability of humans and hence their diseases, the weakest link in the chain could prove deadly: this is called the epidemiological gap. Global forces including trade, which enabled and now require vast movements of people and goods, must be mobilized to provide biosecurity. The recent outbreaks of Ebola for example, and SARS more distantly, illustrate both the danger and necessity for international cooperation to avoid a pandemic-or a panic which could lead to unnecessary economic distress.

It is not easy for governments to find a balance for allocating resources between communicable and the more chronic non-communicable diseases. Threats can be exaggerated, leading to economic losses. Cholera for example, was widely feared because of the rapid and nasty course of the disease. Even though an epidemic in 1865 killed many thousands of people in Europe, the Middle East and North America, cholera was still not as deadly as other less dramatic diseases at the time, such as tuberculosis. According to Mark Harrison, the author of Contagion, “fear of cholera was generally far in excess of the risks which it actually posed.”

Beginning in late 2002, a coronavirus on a pig farm in Guangdong Province travelled in human hosts to 37 countries infecting 8273 people, causing 775 deaths. SARS created global fears that impacted the global economy, included estimated losses of at least 40 billion dollars. Governments followed the pattern of the cholera outbreak in the 19th century in terms of their response. First denial, then actions aimed at promoting confidence to minimize economic consequences, even if these actions were not necessarily effective or scientifically defensible.

Intriguingly, Harrison brings up the example of Taiwan, which basically did nothing in terms of epidemiological intervention such as quarantines due to domestic political factors during the SARS outbreak. Canada reacted strongly and its citizens supported measures meant to control the spread of the disease. However, it didn’t seem to matter. According to Harrison

…The lessons of SARS were far from clear. Despite its ineffective response to the outbreak, the disease quickly fizzled out in Taiwan and it was removed from the WHO’s list of infected countries on 5 July 2001, only three days after Canada.

Another important aspect of biosecurity that has increased in importance is food security and safety. Zoonotic diseases such as SARS, which began as cross-infection between humans and animals, are on the rise. 75% of newly emerging infectious diseases in humans originates with animals. This is the dark side of the cornucopian global food market. Intensive farming of animals in one location in order to ship meat and animal by-products to another far away location presents challenges for both the food industry and government regulators. In 2009 China reacted to the swine flu epidemic by banning the import of pork from the United States. The US cried foul, and said that there was no clear evidence linking meat products to transmission of the disease. Harrison says this was not known with certainty:

The position of the US government and others seeking to rescind the ban was weakened after the respected magazine New Scientist carried a piece which suggested that officials at the US Centers for Disease Control had come under pressure from the pork industry to play down any links between human H1N1 and pigs, whereas the author stressed that the linked were clearer than ever.

Despite the drama of the epidemic, the reality is that non-communicable diseases such as cardiovascular disease and cancer pose a far greater risk than communicable diseases; just as your lifetime risk of dying in a car accident is many times higher than dying in a plane crash. The rarity of catastrophic events, and their dramatic and sudden occurrence, is what rivets public attention. Governments feel that they must react to the popular outcry, even if they do not actually understand what to do. This leads to misallocation of capital based on political motivations.

Independent non-governmental health care organizations can also misallocate resources for public health. These new actors are playing an increasingly visible role as they fill in the vacuum left by governments, particularly in developing countries, hit by economic downturns and fiscal shortfalls. One of the largest non-governmental organizations is the Global Fund to Fight AIDS, Tuberculosis, and Malaria. It is largely a funding mechanism for programs, awards, and grants based upon proposals. China, once one of the largest recipients of the Global Fund’s $23.2 billion in disbursements since 2002, has now been deemed ineligible for further funding and a scramble has ensued.

A recent working paper by Yanzhong Huang and Jia Ping of the Council on Foreign relations in New York examines the legacy of this extraordinary decade-long intervention in China’s fight against these three communicable diseases, and the story is not salutary. Although the triggering effects were beneficial, and transparency and attitudes towards both treatment and patients were more in line with global norms, the longer-term consequences are more negative. These include disruption in the nascent development in local NGO’s when funding was cut off.

There is also the question of return on investment even for social causes. Some of the spending is hard to justify. According to the paper, The Global Fund spent $115 million on anti-malarial programs in China. The reduction in cases of malaria was 25,520 to 7855 from 2002 to 2012, and deaths decreased from 42 to 19. Even if 100% of the reduction was due to the Global Fund itself, these numbers are so small that the changes could have been due to many reasons. In a country where there are significant numbers of people with common ailments who struggle to find basic health care, it does seem that the money, although well-meaning could have been better spent on the fundamentals of health care in order to benefit a larger number of people.

According to a study by the World Economic Forum, non-communicable diseases (NCD) will cost the world economy $47 trillion dollars by 2030 and now account for 60% of deaths worldwide. This figure rises to 80% in developing countries, pointing up the need for basic health care to treat the diseases we already understand how to treat and prevent. According to the study “To a substantial degree, NCD’s are caused by tobacco use, harmful use of alcohol, physical inactivity and poor diet.” So it could be that the money spent to eradicate the few remaining cases of malaria in China would have been better spent to improve nutrition and decrease the use of tobacco and alcohol.

The reality is that in a highly interlinked world of limited resources, we need to create global solutions networks composed of private companies, governments, academic institutions, and individuals to tackle the ever-rising costs of health care. Communicable diseases must be dealt with in proportion to the real risks that they pose, and resources should be allocated rationally to deal with known health factors.

Maintaining trade and economic activity during a crisis is not just important for businesses. It is critical because longevity increases with a higher standard of living. Good hygiene, clean water, and sufficient nutrition have probably done more to increase lifespans than modern medicine itself. Simple medical interventions such as oral rehydration for example have saved many millions of lives and are inexpensive.

Back in 2001, another influential book called Germs came out about biological warfare. It was a scary time, and biological weapons are still a threat, as we have seen in Syria. But just as we reacted to another event in 2001 on September 11th, in hindsight it is a question whether our reaction that included two decade-long wars and resulted in the deaths of many more people than were killed on 9/11 was effective and the best use of our resources. We need to ask ourselves the question as global citizens: can we afford it? In order to create food security for example, can we really afford organic non-GMO foods for all of mankind? In order to prevent communicable disease, should we route resources that could be used for clearly preventable non-contagious diseases? These are choices that individual governments will have to make, but the consequences will be global. 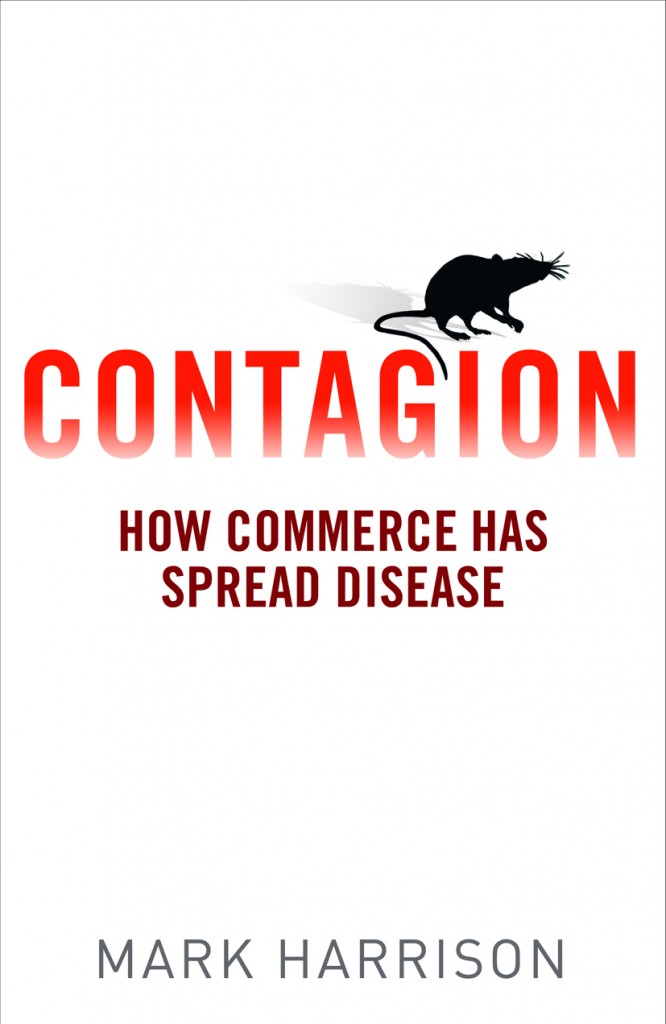 Flight to the Arctic: The Narrow Edge

The rufa red knot sandpiper and the common horseshoe crab, two relatively unassuming creatures, are the focus of a…