During the 1930s and 1940s, a unique and lasting political alliance was forged among Third Reich leaders, Arab nationalists and Muslim religious authorities. From this relationship sprang a series of dramatic events that, despite their profound impact on the course of World War II, remained secret until now. In the groundbreaking Nazis, Islamists, and the Making of the Modern Middle East, esteemed scholars Barry Rubin and Wolfgang G. Schwanitz uncover for the first time the complete story of this dangerous alliance and explore its continuing impact on Arab politics in the twenty-first century. Rubin and Schwanitz reveal, for example, the full scope of Palestinian leader Amin al-Husaini’s support of Hitler’s genocidal plans against European and Middle Eastern Jews. In addition, they expose the extent of Germany’s long-term promotion of Islamism and jihad.

Read an extract from from Nazis, Islamists, and the Making of the Modern Middle East below.

From Station Z to Jerusalem

It began as another normal summer day in June 1942 at the Sachsenhausen concentration camp near Berlin, the place where SS trainees were taken to see how the Master Race’s captive enemies should be treated. Three barracks in a separate section housed Jewish prisoners, mainly Polish citizens or men deported from Berlin. On that particular day, a squad of shouting guards ordered the Jewish prisoners of Barrack 38 to line up for special visitors participating in the SS tour.

As a model SS facility Sachenhausen was run with the utmost efficiency and discretion. Whenever a prisoner was murdered or died, the nearby town’s officials filled out a routine death certificate, as if his passage from life had been an ordinary one. Only the wafting smell of death from the cremation chimneys suggested otherwise. Yet this visit was handled with even greater care. Fritz Grobba, the Nazi regime’s chief Middle East expert and liaison with its Arab allies, emphasized the event’s importance. Everything must be perfect. So seriously did the Reich’s leadership take this occasion that SS chief Heinrich Himmler personally drove to Sachsenhausen beforehand and took the planned tour himself.

The timing was carefully selected. In May, just one month earlier, the Germans had begun a new project that they wanted to show off to their allies. It was codenamed Station Z. The choice of the letter “Z,” the alphabet’s last letter, was to symbolize that this place would mark the end of the road for Jews, not only in Sachsenhausen but throughout Europe.

For years, the Nazis had experimented with the best method for exterminating Jews and others. Starting with individual hangings, they moved on to shooting people in groups, more efficient but still slow. The breakthrough in mass producing death came in 1941 with the development of camouflaged gas chambers. These had just been installed at Sachsenhausen along with four new crematoria to speed up disposal of corpses. In May, Himmler ordered the killing of 250 Jews in the camp as a test run. The system worked flawlessly.

And so, in June 1941, four special Arab guests visited the prototype for future death camps. Their interest had a very practical purpose. One day, they planned to create their own Station Z’s in the Middle East near Tunis, Baghdad, and Jericho to eliminate all the Jews in the region.

That goal had been set in a January 1941 letter than Amin al-Husaini, the Palestine Arab political and religious leader, sent German Chancellor Adolf Hitler. Al-Husaini asked Hitler to help Arabs solve the Jewish question in their lands the way it was being done in Germany. To succeed they must learn the Nazis techniques and obtain their technology.

This was why four officials from Germany’s Arab allies were at Sachsenhausen in June 1941, preparing the day they would return home behind Hitler’s army. One interpretation of the documents has been that they were all aides, one of Al-Husaini and three working for Germany’s other main Arab ally, Rashid Ali al-Kailani, Iraq’s former ruler who had been overthrown by a British invasion the previous year and fled to Berlin. The delegation’s Palestinian Arab member would have been either al-Husaini’s security adviser, Safwat al-Husaini, or another nephew, Musa al-Husaini, who handled propaganda and agitation.

Another interpretation, however, is more dramatic: the four visitors might have included Germany’s two main Arab allies in person – al-Husaini and al-Kailani – each with one aide. The evidence points to at least al-Kailani’s personal presence. Grobba had written, “There shouldn’t be concerns about the participation of al-Kailani himself in this inspection.” Foreign Ministry Under Secretary Martin Luther asked “Why al-Kailani and his entourage had visited that camp.” The visitors most likely, then, included al-Kailani, an Iraqi and a Palestinian Arab whom their bosses had assigned to the SS course, along with either a second Iraqi assistant or, less probably, al-Husaini himself.

Whether or not he personally visited the death camp on that occasion, the grand mufti emerged as Nazi Germany’s main Arab and Muslim ally. He and his entourage had first fled British arrest for stirring a bloody revolt in Palestine, and had then – after a stay as al-Kailani’s guest in Baghdad – fled to Germany ahead of the British army. On November 28, 1941, Hitler gave al-Husaini a long audience as a mark of special favour, during which they agreed to cooperate in committing genocide against the Jews.

The path leading to that moment started in 1871, when Prussia led neighbouring states into the creation of a united Germany. Arab intellectuals later saw this as a model for doing the same thing. Before World War I, Germany’s monarch, the kaiser portrayed himself as a patron of Muslims and Arabs. During the war, Germany formed a jihad to encourage Muslims to fight on its side. After the war, the thinking of Hitler and al-Husaini had developed along parallel lines. Both the grand mufti and Hitler developed the idea that only exterminating the Jews would let them achieve their goals. The two men each sought allies with a similar worldview. When Hitler became Germany’s chancellor in 1933, the grand mufti visited the German consulate in Jerusalem to offer cooperation. That same year, Hitler’s autobiography, Mein Kamp, was serialized in Arab newspapers and became a bestselling book.

Nazi Germany and its ideology became popular among Arabs for many reasons. They, too, saw themselves as weak, defeated, and humiliated people, much like the Germans after World War I. Germany was also an enemy of Britain (which ruled Egypt, Sudan, Jordan, Palestine, and Iraq); France (which ruled North Africa, Lebanon, and Syria); and the USSR (which had large Muslim-populated areas).

In addition, many Arabs hoped to copy Nazi Germany’s seemingly magic formula for quickly becoming strong and victorious by having a powerful government mobilizing the masses by passionate patriotism, militant ideology, and hatred of scapegoats. That fascist Italy offered the same model reinforced the idea.

The grand mufti later wrote that many Arabs proclaimed, “Thank goodness, al-Hajj Muhammad Hitler has come.” The regimes that would later rule Iraq for forty years, Syria for fifty years, and Egypt for sixty years were all established by groups and leaders who had been Nazi sympathizers.

The alliance between these two forces was logical. Al-Husaini’s 1936 – 39 Palestinian Arab rebellion received weapons from Berlin and money from Rome. In 1937, he urged Muslims to kill all the Jews living in Muslim lands, calling them “scum and germs.” But al-Husaini’s ambitions went further. He wanted German backing not only to wipe out the Jews in the Middle East but also to make him ruler over all Arabs. In exchange for Berlin’s backing, he pledged to bring the Muslims and Arabs into an alliance with Germany; spread Nazi ideology; promote German trade; and “wage terror,” in his own words, against the British and French. The Nazis were eager for this partnership. They established special relationships with the Muslim Brotherhood, the Ba’th Party, the Young Egypt movement, and radical factions in Syria, Iraq, and Palestine. Berlin also hoped to build links with the kings of Egypt and Saudi Arabia. In 1939, for example, Hitler met Saudi King Abd al-Aziz Ibn Saud’s envoy, Khalid al-Qarqani, telling him: “We view the Arabs with the warmest sympathy for three reasons. First, we do not pursue any territorial aspirations in Arab lands. Second, we have the same enemies. And third, we both fight against the Jews. I will not rest until the very last of them has left Germany.”

Al-Qarqani agreed, saying that the prophet Muhammad had acted similarly in driving all the Jews out of Arabia. A Muslim could make no more flattering comparison. Hitler asked al-Qarqani to tell his king that Germany wanted an alliance and would arm both Saudi Arabia and al-Husaini’s men.

But first, Hitler had to decide precisely how “the very last” of the Jews were to leave Germany. As late as 1941, Hitler thought this could happen, in the words of Hermann Göring in July, by “emigration or evacuation”. Yet since other countries refused to take many or any Jewish refugees, Palestine was the only possible refuge, as designated by the League of Nations in 1922. If that last safe haven was closed, mass murder would be Hitler’s only alternative. 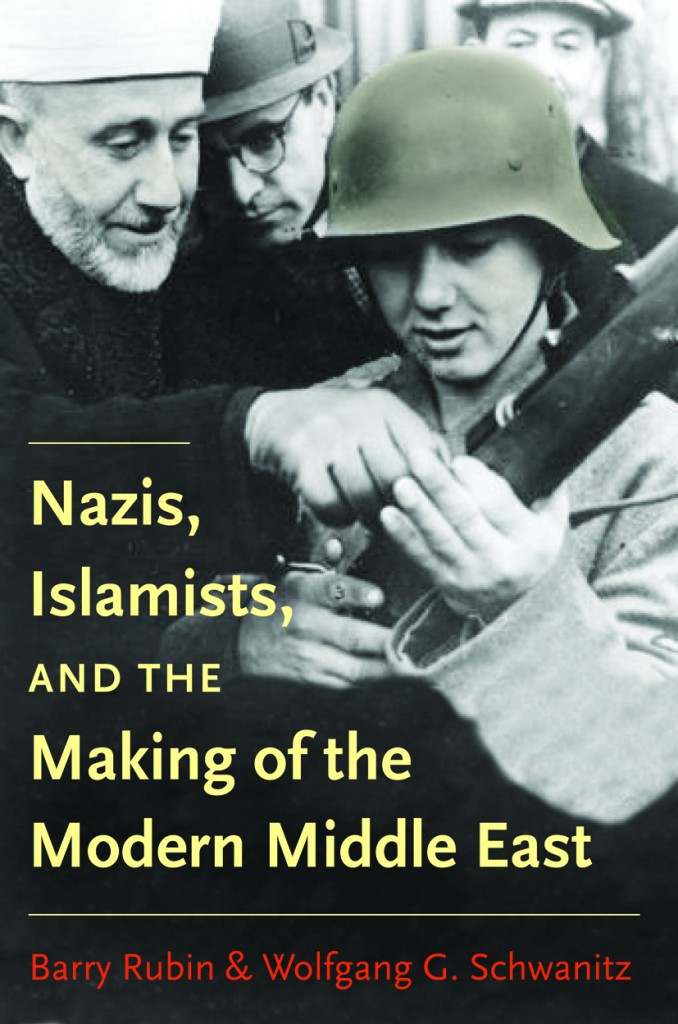 Bookshop of the Month: Heywood Hill

At 10 Curzon Street in Mayfair, London, you will find Heywood Hill – our bookshop of the month…