Any discussion of suicide is incredibly emotionally charged. The sudden departure of an individual, as well as the impact on those who survive them, can be enormously difficult to comprehend. The numbers of people who take their own lives is rising and studies confirm that suicide causes more suicide, both among those who knew the person and even among strangers who feel some connection.

In her latest book, Stay: A History of Suicide and the Philosophies Against It, author, poet and philosopher Jennifer Michael Hecht recounts individual suicide cases from the Bible and ancient Greeks to the present day and analyses how ideas about suicide have changed over time. She explains several puzzling aspects of attitudes toward suicide, including the strange fact that secular philosophy has long been associated with a pro-suicide attitude. In our own times, when the influence of religious prohibitions has waned, Hecht finds that we lack shared, secular, logical arguments against suicide. But there are such arguments, and she focuses new attention on these forgotten ideas that offer hope in the face of despair and powerful reasons to stay when suicide seems a tempting choice.

In this extract, Hecht looks back to antiquity, specifically the story of Lucretia’s ‘heroic’ death, and begins to explore the mythology that surrounds suicide. This investigation is then framed in the context of a compelling nonreligious argument against self-killing and why there can be hope for the future even of the midst of the darkest situations.

“Ancient Roman history begins with a suicide. The virtuous and lovely Lucretia lived in the late sixth century B.C.E. A married woman and the daughter of a man of distinction, she was known for her industry and faithfulness. The boot of Italy was ruled in ancient times by Etruscan kings, but its people already called themselves Roman. Noble Roman families supported Etruscan kings, but there were considerable tensions. Then one night, as the story is told, a group of Etruscan and Roman men were drinking and got into a discussion comparing the character of their wives. Lucretia’s husband boasted about her virtue, and when the men sent someone to check on her, indeed Lucretia was at home weaving and supervising her servants work. The son of the Etruscan king, Tarquin, was among the drinking party, and he grew obsessed with Lucretia. Waiting until she was alone, he went to her, told her he wanted her, and offered to make her his queen. He told her that if she resisted he would rape and kill her, then cover up the deed by killing a male slave and telling everyone that he had chanced upon them having sex and had killed them for it. To avoid ruining her reputation, she gave in to her attacker. He left believing that to defend her life and her good name, she would guard the secret of what had happened.

It is an awful story, of course, but for the Romans who told of it, it is Lucretia who triumphs. She dresses herself in black and runs to her highborn kinsmen, calling together her husband, father, brothers, and friends, and tells them what the Etruscan prince did. She demands revenge against the man who did this to her, but also on the entire political system that allowed it. Then she takes out a dagger and kills herself. Having told her own story, she protects her own honour. As she breathes her last, the gathered men pass around the dagger that killed her and swear on it an oath that begins, ‘By this blood – most pure before the outrage wrought by the king’s son. . .’ and ends ‘I will not suffer them or anyone else to reign in Rome’. The story then usually takes the spotlight off Lucretia’s corpse and follows instead the men as they storm off to overthrow the Etruscans. Thus begins the story of Roman self-governance.

Lucretia’s death took place at the very commencement of Roman history in 508 B.C.E., and it remained an article of Roman faith that the outrages that led to her death spurred her countrymen to overthrow their foreign king and to establish not another kingdom but the Roman Republic. The story emphasizes how highly honour was prized in the ancient Roman and Greek world, even unto death.

Lucretia’s heroic death ensured her cultural immortality. Centuries later she was painted by such celebrated European artists as Titian and Botticelli, as well as the most renowned woman painter of the Renaissance, Artemisia Gentileschi. Lucretia’s image was rendered by the acclaimed engraver Marcantonio Raimondi, and by such lights as Dürer, Raphael and Rembrandt. Lucretia’s story was also told in Chaucer’s Canterbury Tales, in Dante’s Inferno, and in Shakespeare’s long poem The Rape of Lucrece.

In this book we shall follow Lucretia through history, scrutinize several other key suicides – some more famous today, like Samson’s under his ceiling and Cleopatra’s with her asp – and track self-murder’s strange, sometimes eerie, and always instructive guises. These historical travels will reveal a fascinating story about the meaning of suicide across history. It is a compelling story in its own right. It also helps us understand the way people think about suicide in our time. It is a tremendous issue.

In the United States over the past twenty years more than 30,000 people have taken their own lives per year. In the latest documented data from the Center for Disease Control and Prevention, from 2010, the number was up to 38,364. Consistently, historically and now, more people die of suicide than are murdered. Worldwide, more die of suicide every year than by drowning, or fire, or maternal haemorrhage. Worldwide, for both men and women between the ages of fifteen and forty-four, more die of suicide than in war. In the first half of 2012, active-duty U.S. troops killed themselves at a rate averaging one a day; in 2010 (the latest year for which statistics are available) the rate among U.S. military veterans reached one every sixty-five minutes – about twenty-two a day. For American men under thirty-five, suicide has killed more than AIDS in all but three years since the disease first appeared. Suicide is among Americans’ top ten causes of death, and for adults under forty-five, it is among the top three. Between the ages of twenty-five and thirty-four, a death is more likely to be suicide than by anything but accident; more die of suicide than of AIDS, cancer, heart disease, or liver disease. The rate of increase has been higher among the young, but in sheer numbers suicide is more common between ages thirty-five and sixty-four.

Worse yet, the rates are rising. According to the World Health Organisation, the past forty-five years suicide rates have increased by 60 percent worldwide. In the past ten years the rise has been shocking: in 2001 the number of suicides per year in the United States was 30,622 compared with more than 38,000 in 2010. Between 2008 and 2009 along, the suicide rate in the United States rose by 2.4 percent, some of the dramatic increase in this most recent period has been among the young, middle-aged white women, and soldiers and veterans – but the increase is felt across most groups that have been examined. Why are we not responding to this tragedy? Unlike so many other dangers to public health and safety, suicide can seem like a crime without a real victim. But the person who commits suicide is, in fact, a real victim. Additionally, the friends, family, and community of those who die suffer mightily, even fatally, and are likewise victims. The whole of humanity suffers when someone opts out. The suicide is also a real victim because he or she had a future self that may not have wanted this.

As I examine the history of how, in the West, we have understood self-killing, I also will put forward what might seem to be a contrarian position, a nonreligious argument against suicide. It is a philosophical argument but parts of it can be or even must be told in terms of history, and parts must be demonstrated through modern statistics. One of the arguments I hope to bring to light is that suicidal influence is strong enough that a suicide might also be considered a homicide. Whether you call it contagion, suicidal clusters, or sociocultural modelling, our social sciences demonstrate that suicide causes more suicide, both among those who knew the person and among the strangers who somehow identified with the victim. If suicide has a pernicious influence on others, then staying alive has the opposite influence: it helps keep people alive. By staying alive we are contributing something precious to the world.”

– from Stay: A History of Suicide and the Philosophies Against It by Jennifer Michael Hecht 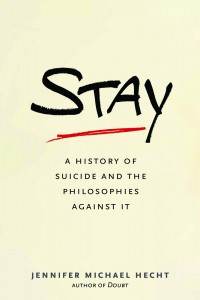