Midway through the Second World War Primo Levi had just embarked upon a career in chemistry. Despite the increasing encroachment of anti-Semitic laws upon his native Italy, he found himself living a relatively conventional life, largely unaware of the horror and depravity of the Holocaust. As he later recalled, when he learnt that the destination of the deportation train he eventually shared with 650 other Jews was ‘Auschwitz’, the name meant nothing to him.

In 1943 Levi joined a partisan group and was captured by the Italian Fascist Militia, before being deported to Poland and ultimately the barbed wire confines of Auschwitz. He was one of only 24 of the original 650 on his train that survived the eleven months of incarceration before the camp was liberated. Upon returning to his native Turin, Levi resumed work as a chemist and was employed for thirty years by a company specialising in paints and other chemical coatings. Yet soon after this return he also began writing – memoirs, essays, novels, short stories, poetry – work that has subsequently won him international recognition. His compositions, beginning with the 1947 publication of a first book If This Is a Man, remain key accounts of a turbulent period.

Berel Lang’s ground breaking biography shines new light on Levi’s role as a major intellectual and literary figure – an important Holocaust writer and witness and innovative moral thinker, for whom the dual roles of chemist and author converged, providing the ‘matter ’ of his life. This extract, taken from the second chapter ‘The War ’, documents the imposition of tragedy on Levi’s life, as he moves from taking carefree trips to the mountains to being confronted by the reality of the so-called ‘Final Solution ’.

“It astonishes me to recall that in August 1943, so pregnant with tragedy, we went up for a trip in the mountains without troubling ourselves too much about the future.” – Primo Levi, La Stampa, September 9, 1983.

Forty Years after the event, Levi was “astonished” at the summer excursion in August 1943 that he and sister took to the Piedmont mountain town of Cogne. Forty years after that – now, 2013 – the excursion still seems improbable. At the time of Levi’s holiday, World War II had reached its “world” extent. Six months earlier, the Battle of Leningrad ended in Germany’s surrender with a total number of about two million dead in the eight-month struggle. By August, after almost two years of fighting in the Pacific and North Africa, the United States had suffered 50 percent of its total wartime casualties. Units of the German and Italian forces that in May had surrendered to the Allies in North Africa were fighting in Sicily, where the Allies had landed on July 10.

This news on a large scale stood side by side with events closer to home for Levi. The Allied bombing of Italy, from north to south, was intensifying, and he had himself experienced a heavy air raid, and he returned to find the building in which he roomed uninhabitable; his home city of Turin had been bombed first in June 1940 and with increasing frequency afterward, and the growing frequency reflected the turning tide of the war. In addition, by August 1943, more than two-thirds of the six million Jews murdered in the Holocaust were dead. The six main killing camps – the death factories epitomizing the “Final Solution of the Jewish Question” – had been active since July 1942: three of them (Belzec, Sobibor, and Treblinka) would cease their murder operations in the two months following Levi’s summer excursion. Then, too, in the five months after August 1943, Levi would become a member of a partisan group in the Piedmont mountains, enduring capture by Italian Fascists and a transfer to a collection camp at Fossoli, be packed at Carpi into a freight car sent on its way to Auschwitz, and find himself there. A prediction of this future in that same August would undoubtedly have produced greater incredulity in Levi at the time even than his reaction to his summer excursion forty years later.

At the time, moreover, Levi’s carefree attitude about the war was plausible as well as possible. The 1938 radical laws imposed in Mussolini’s Italy – Mussolini’s since 1922 – were the first specifically exclusionary laws affecting Italy’s Jews (the 1928 Lateran Treaties, arguably a foreshadowing, had established Catholicism as the state religion), and even the 1938 legislation did not revoke the Jews’ citizenship as the Nuremberg Laws had mandated for German Jews three years earlier. The definition in the Italian racial laws of who was Jewish was also more limited, requiring as a minimum one Jewish parent (the father) – and even then parents and children were excluded from the category if they had converted in time (October 1938), this in contrast to the requirement of three Jewish birth grandparents that with a dew variations had been mandated in Germany under the definition attached to the 1935 Nuremberg Laws. Partly because of its relatively small numbers (48,000 to the 1938 census); partly because of the community’s acculturation and economic status; partly because of the Catholic Church’s traditional ambivalence toward Jews – at once stigmatizing them and willing their preservation as  stigmatized- and partly because of the casual attitude more generally in Italy toward group discrimination, the Jewish community had not only sustained itself but flourished with little social or political hindrance since the country’s unification in 1861 (its full extent came in 1870), despite occasional outbursts of stereotypical antisemitism. Various indicators of Italian Jews’ public roles reflect this. Although they made up less than 1 percent of the populace, more that 15 percent of the Senate in 1920 was Jewish; the Italian armed forces in World War 1 included 50 Jewish generals – and an estimated 230 Italian Jews participated in the march on Rome in October 1922 that later came to symbolize Mussolini’s rise to power. Nor, given these appearances, was it surprising that the Italian-Jewish middle and upper class – a substantial portion of the community – would largely support Mussolini and the promise he represented to them of social stability. (They also provided some of the early opposition to Mussolini through the Communist and Socialist Parties, but that opposition became a serious political factor only later in the war years.) When the 1938 anti-Jewish racial legislation was passed, it is estimated that about a third of the adult Italian-Jewish populace – about 10,000 – were members of the Fascist Party; Cesare Levi, Primo’s father, was among them. The 1938 legislation forced these Jewish members out of the Party, but even after that happened, many of the same group remained both regretful and hopeful. Primo Levi recalls his father speaking optimistically at the time about the future: “Ah, but we’re in Italy. . . . They wouldn’t dare do anything to us.”

The same 1938 legislation also prohibited the enrolment of Jews in “mixed” educational institutions, a rule that would have ended Primo Levi’s days at the University of Turin, which he entered in 1937, had it not been for a clause in it which permitted Jewish students in their second university year or beyond that to complete their degrees. Levi was thus able to continue his studies, and he then received his degree in chemistry in 2941. During those student days, furthermore, he was permitted (and agreed) to join the Fascist club at the university – a membership, he commented, that allowed him access to facilities at the university that he would otherwise have been denied. (At the age of five, he had been one of the Sons of the Wolf – Figli di Lupa, roughly comparable to American Cub Scouts – the children’s organization initiated by the Fascist government.) After receiving his university degree, he twice succeeded in finding employment as a chemist, although in order to obtain those positions his Jewish name and identity had to be disguised, a deception he managed with the complicity of his non-Jewish employers.

Until shortly after his August excursion, Levi’s family and circle of friends in Turin and in Milan, where he was then working, provided a measure of insulation from the events of the war outside Italy and to an extent within it. Even his initial involvement with street activities during that time – distributing opposition pamphlets, tearing down Fascist Party posters – though dangerous, had various buffers around it. The “abnormality” of being Jewish was certainly more constrictive that the position of the non-Jewish populace, including those who opposed fascism, but notable elements of increased suffering and hardship were common to the two groups. The costs of the war, the increasing damage to Italy’s cities from Allied bombings, the casualties suffered by Italian forces fighting alongside the Germans, and a growing disillusionment with the tactics and justifications of Mussolini as leader – Il Duce – all those were shared. Then too, there was the lurking issue in Italy, more and more western European countries, of the spare public information about what was not yet recognized or understood as “the Holocaust.” Looking back, one of Levi’s recollections mentioned in If This Is a Man seems much more than astonishing: when he and the others among the 640 Italian Jews in the transport taking them to Auschwitz saw a sign at the beginning of their journey at the rail siding in Carpi which indicated their destination was “Auschwitz,” the name meant nothing to them. Their first thought was that it might be a variant or misprision of “Austerlitz” – a punning mistake on the site of the Napoleonic victory and the Paris railroad station. Levi’s recognition of Auschwitz for what it was only began when his transport arrived at the place itself on February 26, 1944. At that time, the gas chambers of Auschwitz, the consummation of the Nazis’ search for an impersonal means of mass murder, had been in operation there for almost two years.
– From Primo Levi: The Matter of a Life by Berel Lang 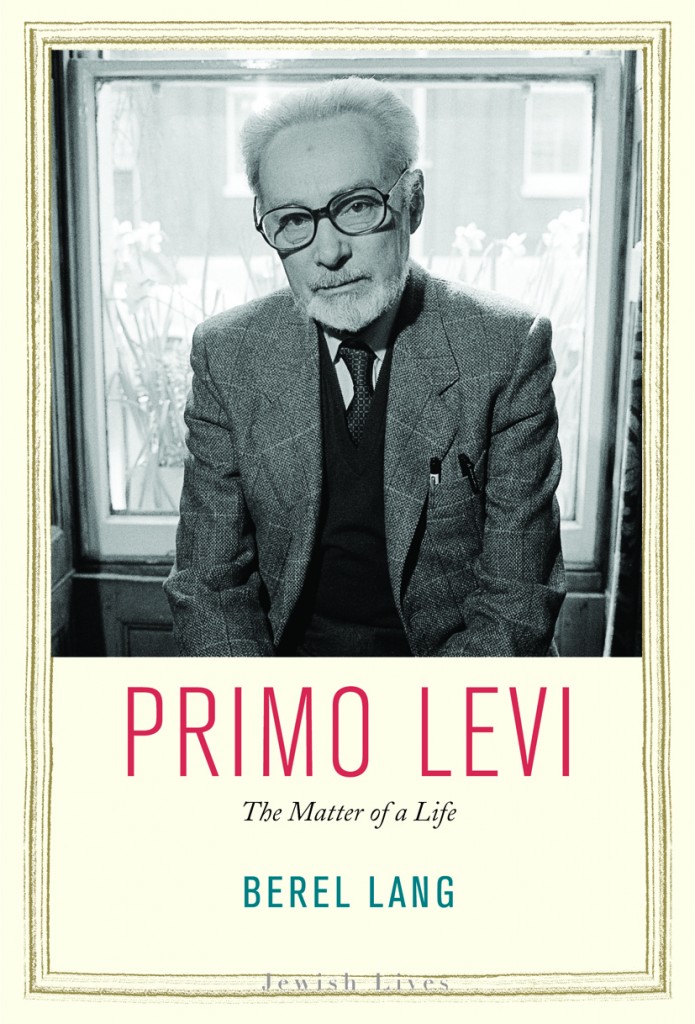 When it comes to the desirability of a house, property experts and novices alike have no doubt heard…