Britain’s pagan past, with its astonishing number and variety of mysterious monuments, atmospheric sites, enigmatic artefacts, bloodthirsty legends and cryptic inscriptions, has always enthralled and perplexed us. Pagan Britain by Ronald Hutton is a history of religious beliefs from the Old Stone Age to the coming of Christianity. This ambitious book integrates the latest evidence to survey our transformed – and transforming – understanding of early religious behaviour; and, also, the way in which that behaviour has been interpreted in recent times, as a mirror for modern dreams and fears. From the Palaeolithic era to the coming of Christianity and beyond, Hutton reveals the long development, rapid suppression, and enduring cultural significance of paganism. Woven into the chronological narrative are numerous case studies of sacred sites – both the well known Stonehenge, Avebury, Seahenge and Maiden Castle, and more unusual far-flung locations across the mainland and coastal islands.

In this extract from Pagan Britain, Hutton describes the origins of Homo sapiens on the British isles, considers how their religion may have developed and foregrounds the importance of art to these ‘anatomically modern humans’.

“Human-like beings have been occupying the land which has become Britain, on and off, for almost a million years, and probably longer. For most of that period, the land concerned was a peninsula of the European mainland, representing a remote hilly margin to the great plains which now lie under the North Sea and to which archaeologists have given the name ‘Doggerland’. Whether the first species of human to reach it had a capacity for what we would now call religious belief, and whether such a capacity was possessed by any of those that followed before the arrival of our own, is a disputed question. The balance of opinion currently seems to be shifting towards the view that they had, and especially the Neanderthal people who occupied Europe when anatomically modern humans arrived there. The matter, however, is far from decided. What is absolutely clear is that our own species, Homo sapiens, manifested every sign of possessing the necessary imaginative faculty as soon as it evolved, whether a result of evolution, as most Western scholars now believe, or as a divine gift, as is still the opinion of some adherents to certain faiths. Every test of evidence which has produced equivocal results when applied to other kinds of human has yielded an unequivocal one in the case of ours, and especially in two areas: the ceremonial burial of the dead, and the production of painted or carved representations, of animals, humans and figures which mix attributes of the two. Together with other traces of a heightened sense of imagination and of symbolic behaviour, such as the making of musical instruments and the regular development of new and better technologies of tool-making, these activities attest strongly to a capacity to conceive of worlds beyond the material and the immediate.

Such a capacity was manifested with particular strength as anatomically modern humans reached north-western Europe from about 42,000 BC onwards: indeed, the quantity of paintings that survives there from their hands is probably greater than that found anywhere else in the world from humans living more than 10,000 years ago. Why this should be has been much discussed. Some commentators suggest that unusually rich hunting grounds there generated exceptionally large and settled populations of people with a greater need mark territory and reinforce group solidarity. Others attribute this artistic productivity to the collision of our human species in Europe with an existing one, the Neanderthals, producing an enhanced propensity on our part to engage in creative behaviour designed to affirm our identity and mark our world. In the 1990s the term ‘the Human Revolution’ was coined to describe the quantum leap taken by European material culture with the arrival of Homo sapiens. Whether or not it is appropriate in the world context, it vividly the dramatic change in the archaeological record caused by the arrival of our kind of human. With it, the study of the earliest epoch of human prehistory, the Palaeolithic or Old Stone Age, reaches a point at which a consideration of religious behaviour needs to be part of the process.

Until recently, Britain hardly featured in such an exercise, being regarded as one of the most marginal areas of human activity in Palaeolithic Europe. Since the 1990s that position has altered dramatically, as British sites have been revealed as important even by global standards. Three in particular have been outstanding, and in each case the evidence concerned has posed problems that reach to the heart of the archaeology of the Palaeolithic and raised questions concerning the nature of perception, and of knowledge, itself….”

– from Pagan Britain by Ronald Hutton 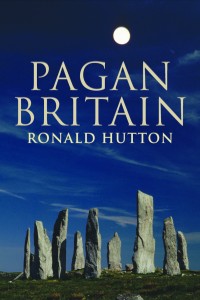 Five Characteristics of a Witch – An Extract by Ronald Hutton

Witches can be defined, quite legitimately, in a number of different ways in the present world. What follows…