Jonathan Swift is best remembered today as the author of Gulliver’s Travels, the satiric fantasy that quickly became a classic and has remained in print for nearly three centuries. Yet Swift also wrote many other influential works, was a major political and religious figure in his time, and became a national hero, beloved for his fierce protest against English exploitation of his native Ireland. What is really known today about the enigmatic man behind these accomplishments? Can the facts of his life be separated from the fictions?

In this extract from Leo Damrosch’s thoroughly researched biography, the author introduces Swift’s early years and describes how his family found their way to Ireland.

“The story that Jonathan Swift told is that he came into the world on November 30, 1667, in the house of his uncle Godwin Swift, in a little Dublin alley known as Hoey’s Court. He was born there because his father had recently died at the age of twenty-seven, and his mother, Abigail, had moved in with her Swift relatives. The baby was named Jonathan, after his father. Abigail also had an eighteen-month-old daughter, Jane, and hardly any money.

These, at least, were the facts as Swift understood them. But strangely, nothing is certain about his early years, including the date of birth. The year may not have even been 1667. He was presumably baptized in the nearby parish church, St. Werburgh’s (which he pronounced “Warbrow’s”). But when he had had the church register searched years later, there was no record of the baptism. This may or may not be significant; a colleague of his thought the omission must have been “due to the carelessness of the vestry clerk at the time”. On the other hand, it’s conceivable that he was baptized someplace else, and not necessarily in a church at all. Swift was old that his father had died seven months before his birth, “just enough time to save his mother’s reputation,” as he often remarked. But there is no official record of his father’s death either. We know only that his parents were married in 1664. It may even be that the real baby’s father was someone else, a startling possibility that Swift himself may eventually have suspected. There is no solid evidence for that, but if those concerned wanted to keep it secret, they could have made sure that there would be no evidence. And in fact many of aspects of Swift’s early life are puzzling, to say the least. Hoey’s Court has vanished, too. If you go in search of Swift sites in Ireland, you will usually search in vain, and all that remains today of Godwin Swift’s house is a plaque on a wall that was put there in 1912: “In No. & Hoey’s Court (now demolished) about 100 feet NW of this spot, it is reputed that JONATHAN SWIFT, Dean of St. Patrick’s Cathedral, was born on the 30th day of November 1667.” Whoever composed this was sufficiently well informed to use the word “reputed.”

HOW THE SWIFTS CAME TO IRELAND

Swift liked to say that he had been unluckily “dropped” in Ireland – a term from animal husbandry. He claimed that his birth happened in Dublin only because his widowed mother was too far along in her pregnancy to risk a sea voyage to her English home in Leicester. “As to my native country (as you call it), I happened indeed by a perfect accident to be born here, my mother being left here from returning to her house at Leicester, and I was a year old before I was sent to England; and thus I am a Teague, or an Irishman, or what people please, although the best part of my life was in England.” Abigail did have relatives in Leicestershire, and evidence has fairly recently been found to suggest that she may have been born in a village just outside the town of Leicester. Ehrenpreis guessed that her father was a clergyman named James Ericke who emigrated to Ireland in 1634, but another possibility is a butcher named Thomas Ericke (also spelled Herrick). If so, she was not the same age as her husband, as Ehrenpreis assumed, but ten years older.

The Swifts were recent arrivals, four brothers in all, beginning in 1658 (two others remained in England). After the Restoration of 1660 brought an end to the Puritan rule that had succeeded the civil wars of the 1640s and ‘50s, large numbers of Protestant English and Scots were encouraged to settle in Ireland, were they were awarded land that used to belong to Catholics. An English governor at the time compared the process to “flinging the reward upon the death of a deer among a pack of hounds, where everyone pulls and tears what he can for himself.” The brothers Swift, sons of a clergyman and seeking employment in Dublin as lawyers, arrived to pull and tear. It has been well said that they were Irishmen in the sense that Camus was Algerian. Jonathan Swift would often observe that colonists in North America were regarded as still English, and that the Anglo-Irish ought to be as well.

Jonathan Swift the elder, our Jonathan’s father, was the youngest but the first to arrive. The oldest brother, Godwin, was thirty-nine when his nephew was born in 1667; William was thirty and Adam twenty-five. We know that in later years William sometimes gave his nephew financial help, more in fact than Godwin did. (Two other brothers had stayed in England and died young.) It used to be thought that Godwin was unusually generous towards his young nephew; Ehrenpreis says that Jonathan’s “early years were sheltered by an uncle’s hospitality,” and that his assistance “must have been an act of disinterested kindness.” But as we will see there are good reasons to doubt this comfortable picture….”

Buy Jonathan Swift: His Life and His World 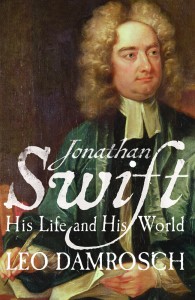 Exploring Wiltshire with Pevsner: The Estate Villages of Joseph Neeld