A central bond, a cherished value, a unique relationship, a profound human need, a type of love. What is the nature of friendship, and what is its significance in our lives? How has friendship changed since the ancient Greeks began to analyze it, and how has modern technology altered its very definition? In Friendship, A. C. Grayling tracks historical ideas of friendship, gathers a diversity of friendship stories from the annals of myth and literature, and provides unexpected insights into our friends, ourselves, and the role of friendships in an ethical life.

In this extract from the introduction to Friendship, A. C. Grayling sketches out the philosophical underpinnings of friendship and discusses why this type of relationship is considered essential for ‘a life well lived’.

“The highest and finest of all human relationships is, arguably, friendship. Consider the fact that we regard it as a success if we become friends with our parents when we grow up, our children when they grow up, our classmates or workmates even as they remain classmates or workmates, for in every such case an additional bond comes to exist, which transcends the other reasons we entered into association with those people in the first place.

And of course our friendships with people who do not fall into one of these categories – that is, our friendships with people who were strangers beforehand – are special in a different and typically less complicated way, because they are purely elective; we meet someone and take a liking to him or her which is reciprocated and thereafter we enjoy each other’s company, laugh together, share interests and views and over time come to feel that we are part of the fabric of each other’s worlds, a valuable part, so that we develop a mutual sense of obligations and trust given, and meet each other’s needs for boon companionship, comfort, confidences and sharing. And we do all this to such an extent that if we lose such a friend we feel the loss deeply, as of someone loved. Indeed we talk of loving our friends, or some of the closer among them anyway, and their loss can be accordingly profound.

Different people provide the friendship we need at different times in our lives, even if certain very particular friends stay the whole course. This is a reflection of the fact that most people change with time and experience and since all parties to a friendship are changing simultaneously, it is not surprising that they might eventually drift apart. In adult life such drift is accelerated when people take sides with one of a divorcing pair – and sometimes people who were friends with a couple lose touch with both of them when they separate.

These are among the facts of contemporary friendship, but they only scratch the surface, because the interplay of moral psychology, emotion, the changing patterns of family and working lives, shifting relationships between the sexes, the effect of religion and its decline as a controlling force in many societies, the models offered by film and television, the wider scope for friendships and relationships in adolescence, the effect on these of electronic social media, and much besides, make the already highly complex phenomenon of friendship even more confused and diffuse.

Indeed the words ‘friend’ and ‘friendship’ have become so stretched and extended as to have lost a good deal of their meaning, and this even before we begin to ask for lines of demarcation between friendship and other relationships across sexes and ages, cultures and ethnicities, divides of experience and oppositions of attitude. Of the famous friendships recorded in history and legend, most are between men and most of those in turn appear not to be friendships but homosexual loves, which raises the question whether much of the thinking about friendship in classical antiquity and afterwards is about a very special and intense version of it, focused upon erotic attraction and its fulfilments. Might this not mislead us in thinking about ideals of friendship, given our intuition that it is something significantly different from passion and desire? These latter form the alembic in which biological imperatives so easily supplant social and psychological interests, which some argue are the true domain of friendship while the sexual imperatives underlie another story altogether. Is that right? Must lovers and spouses move on from that bond before friendship supervenes? Another intuition rejects this thought.

And yet: like love, friendship is a matter far more of emotion that rational calculation. Indeed if it is wholly or even largely the latter, we scarcely think that it merits the name. Of course there are considerations of mutual benefit, help, advantage and support implicit in the idea of friendship, but generally these are the sequelae of the engagement of emotion which constitutes friendship, rather than the motivations for it. For when these are indeed the motivations for one person to seek friendship with another we are instinctively suspicious; we talk of a person so befriended as ‘being used’, of insincerity, untrustworthiness; we talk of false friendship, in which the seeming-relationship, and we can be cheered by the reflection that since we are very clear about when it is lacking, we should be somewhat clear about what it is. It cannot be hard to find the focus of the concept, even if what ranges away on all sides into variety and particularity covers much territory.

Nor is it too hard. Essential and fundamental to friendship is that it is a natural, spontaneous, freely given and entered into relationship promised as much on subliminal cues that prompt liking as on anything that the parties could specify as a reason for engaging in it. Such reason would ex post facto doubtless abound: shared interests, attitudes, views, taste, style, appearance, behaviour, similarity in sense of humour, will figure largely. But we are reliably informed by students of human interaction that much, perhaps most, of the basis for our judgements about others is unconscious, and it might be that there are aspects of the complex network of factors underlying our choices of friends that we are never aware of – even so unexpected a thing as smell of the unrecognised similarity of appearance, tone of voice, or gesture, of people previously liked or admired. It is tempting to short-circuit explanations of why people become friends with each other, especially really good, close, enduring friends by putting the words of Montaigne in his essay ‘On Friendship’ into their mouths: ‘If a man urge me to tell wherefore I loved him, I feel it cannot be expressed but by answering: Because it was he, because it was myself’.

Grant that friendship is far more a matter of emotion that rationality, nevertheless in philosophy – ‘philosophy’ understood in its broadest sense as the mature conversation that humankind has with itself about the things that matter most to it – there has long been discussion about friendship as among the best and most desirable of human relationships. Even if a good many examples cited in this tradition of thought are in fact male love relationships, nonetheless these suggest an important fact to be registered: that the ideal of friendship is close to other ideals of human connection, foremost among them love in its own multiplicity of guises and characters….”

– From the introduction to Friendship by A. C. Grayling 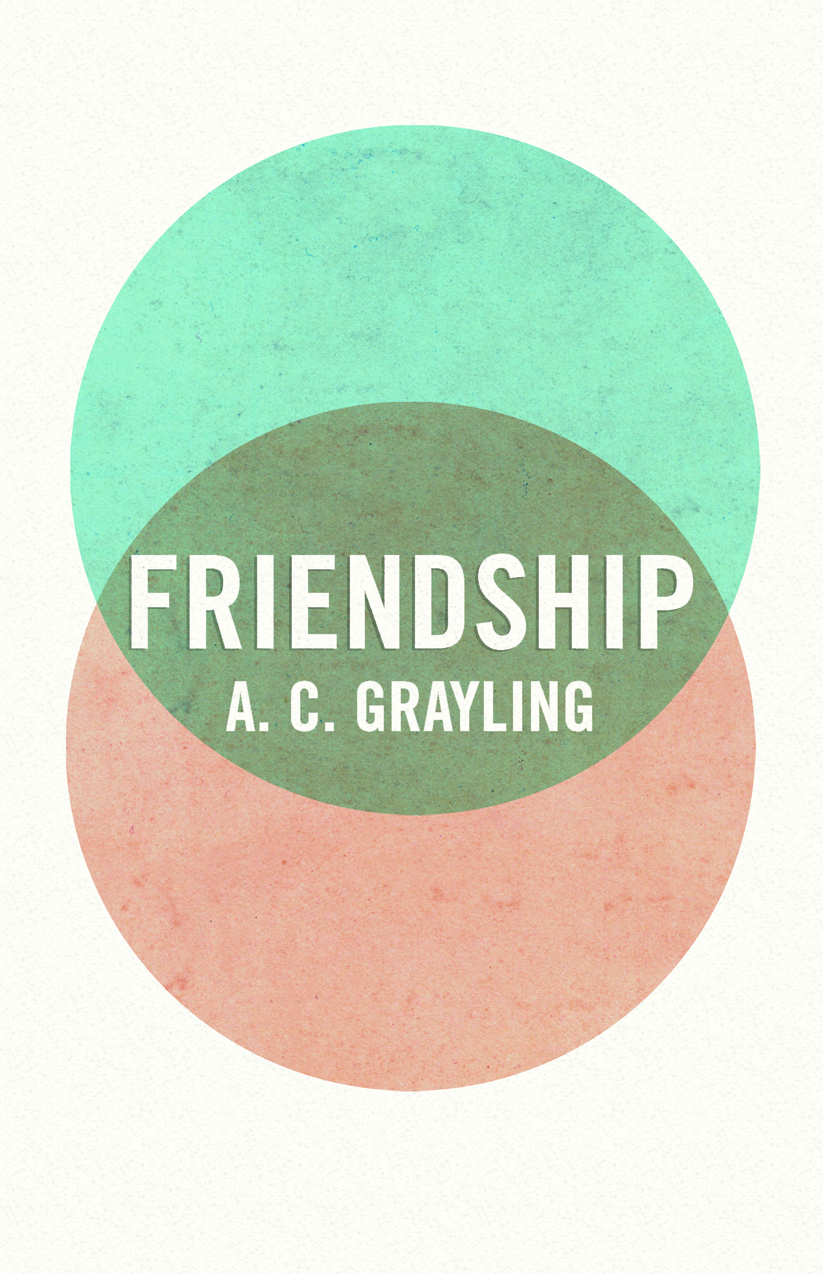