It’s been a big year for digital projects at Yale University Press. Between the two offices in London and New Haven, three apps have successfully launched, all of which have garnered great acclaim. Much of the praise from the public and the press has focused on how Yale University Press has updated classic works for the digital age in innovative form. Creating apps of Josef Albers’ Interaction of Color and Pevsner’s Architectural Glossary has given the press the opportunity to revisit cornerstone works by two of our iconic authors. It is also a chance to enhance the texts in a way that wasn’t possible in the authors’ lifetimes or even ten years ago. 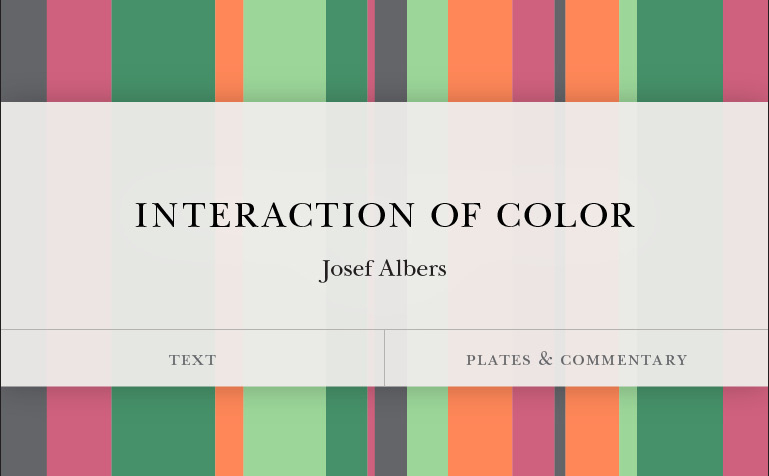 Josef Albers’ Interaction of Color was published fifty years ago and is still often regarded as the key textbook on colour theory. The app is the definitive digital edition of the work. Each interactive exercise is inspired by Albers’ renowned teaching methodologies and the process of creating colour studies with his students in the classroom. The Interaction of Color app showcases the transformative opportunities of the digital platform while upholding the tone, design, language and poetic nature of Albers’ original print treatise.

In its fifty-two year history the Pevsner Architectural Guides series has always strived to break new ground. The Press now faces a big challenge in how it progresses digitally with a series that has always been strongly invested in an analogue world. The first step on the journey has been to make a smarter, more useful and interactive app version of Pevsner’s Architectural Glossary for the iPad and iPhone. The project allowed the Pevsner team to update and creatively experiment with the content by adding additional buildings, terms and new features such as GPS locations and audio. The addition of an audio pronunciation feature (recorded in-house by Pevsner editors Simon Bradley and Charles O’Brien) has been particularly well received. Among the wave of publicity surrounding the launch of the app, the Architectural Journal believes that the glossary brings Sir Nikolaus Pevsner ‘closer to his stated ambition: for every schoolboy to have his own volume of his own county in his pocket’. In a similar vein, Gillian Darley, in her review for Building Design, points out that in Pevsner’s ‘own final, 46th, Buildings of England volume [Staffordshire] he quotes the words of Georg Dehio, his German inspiration. A handbook, Dehio wrote in 1906, “according to its name should have little bulk, be easily transported, be according to its inner organization as clearly arranged as possible and as comfortable to use on the desk as on a journey”. The new app is all of those things, and more.’

Although this year saw the first step into digital for the Pevsner Architectural Guides it is hoped that as the digital publishing landscape evolves, so will the series. The release of the app has proved that there certainly is a demand for digital Pevsner content. In fact the success of the app has enabled Yale University Press to start investing in a digital future. Aided in part by the consumer enthusiasm for such a product, ambitious plans are now in place to digitise the Pevsner Architectural Guides series in its entirety. But before that mammoth undertaking, 2014 will see the Pevsner team working on the release of an interactive suite of apps using content from the successful Pevsner City Guides.

Creating a digital legacy for our authors is at the heart of our strategy. This month saw the launch of an online history project. Lifeofwellington.co.uk is a new website that does more than just promote the first volume of Rory Muir’s Wellington biography, Wellington: The Path to Victory 1769–1814. By providing free access to the author’s additional notes and commentary, it offers readers an extra level of insight and scope for exploration. As Muir himself says: ‘In the past, such material would have remained stashed away in my personal files, or at best trickled into the public realm via obscure scholarly articles and conference papers largely inaccessible to general readers’. Creating a digital home for Muir’s research has given the Press the opportunity to make it available to a wide audience and has also provided a new way to promote the biography and build an online community around both author and book. It is hoped that it will be fully embraced by academics, military history enthusiasts and readers of the book who can access it completely free-of-charge.

By embracing the possibilities that new technology can bring to these groundbreaking works, Yale University Press is reaffirming their importance and reinvigorating these texts for the twenty-first century. Possibilities now lie not only within the extensive backlist, but also in the University’s archival holdings as well as strategic partnerships with other institutions. Watch this space as exciting times lie ahead.

Blood, Dreams and Gold: Burma’s Past Catches up with its Future

‘At one time Burma was a thriving and prosperous regional hub; the hope is that it can eventually…