Heroism is aspirational, founded on tales of extraordinary individuals who overcame seemingly impossible opposition. However, in the modern Western world, with its political quagmire and near constant conflict, where can we find our heroes? Does being a hero mean the same thing today as it meant in classical antiquity? Do the stories of Heracles, Perseus and Achilles still have anything to teach us? In this article, Yale author Lyric Hughes Hale asks, ‘where are the heroes’?

Last week, Diana Nyad, at 64 years of age, swam from Cuba to Florida. This was her fifth attempt: the first was 35 years ago. I can’t imagine anyone who wouldn’t admire and be inspired by her grit and determination. But is she a hero?

Heroism touches upon so many arts and sciences: Jungian archetypes, evolutionary biology, politics, game theory, world literature, and Greek mythology. The original concept of a hero, at least to the ancient Greeks, was that of a demi-god, the child of a god and a mortal, in other words a human with god-like characteristics of bravery and self-sacrifice.There are many debates about the attributes of a hero, but courage is central, and no one can doubt that Nyad was courageous and risked her life to achieve her goal. But there also needs to be some sort of societal benefit derived from the hero’s actions. Nyad’s feat might spur others to attempt goals they otherwise might have abandoned. This effect is salutary, but not necessarily heroic. Why? She didn’t provide protection from danger for others, at a cost to herself.

The word hero comes from the Greek word for protect, and hence its association with the military. It is this component of heroism that is missing for Nyad. If I close my eyes and say hero, what pops up in my mind is the image of a decorated soldier, a war hero. Since the Vietnam War however, this common image has come under nearly constant attack and it could be that someone younger pictures Spiderman. This would not be surprising. Last month, a trio of military trials made front-page news around the world. Two military men were sentenced for something they are trained to do, taking human lives, but they were convicted because they hit the wrong targets: one murdered civilians in Afghanistan, the other killed fellow soldiers at Ft. Hood. How is it that military men, prototypical heroes for centuries, have become high-profile criminals? I think that this would have been unimaginable in the 1950’s. Now even senior officers have been pilloried in the media for behavior unbecoming to a gentleman with disturbing regularity.

Layer this on top of this a public that values the personal sacrifices made by soldiers and their families, but really does not believe in their mission. Seen as futile, many Americans do not want the US to become involved in yet another Middle Eastern conflict, this time in Syria. Is it because we have come to realize (and it is no coincidence that this trend began when images of war came into our living rooms during Vietnam ) that a war hero is only a hero to one side—he is a villain to the other? That our enemies bleed and suffer as we do and things are not so simple?

War is one of the most enduring and complex of human activities and victory is based upon a myriad of factors including availability of resources. John France, in his book Perilous Glory: The Rise of Western Military Power explains the rarity of military heroism:

Military glory is perilous and transient…and chance governs the rise of leadership that most important aspect of war. Genius in any field is rare and the emergence of a military leader who possesses it and has command of the material means to achieve success even rarer.

It is not just resources however: the political environment has to be right as well. The US military is the largest and most powerful in the world, but the political support that is needed to create faith in our military leadership is lacking. And the way we are conducting wars is becoming increasingly hi-tech while we engage more and more with non-state actors.

The third soldier in the news recently, Bradley Manning, played on an electronic battlefield and is as well known and influential as any US general. He was sentenced to 35 years in prison not for killing anyone, but for releasing classified documents. He is more interesting than the other two rogue soldiers in that he decided that in order to protect, he would disobey. Manning is a hero to many around the world because it appears that he was acting according to a higher principle, at the risk of his own welfare. Both he and Edward Snowden sacrificed their freedom in order to do what they saw as moral, breaking the law in the grand tradition of civil disobedience without receiving any personal benefit. Their classification as heroes also depends on what side of the issue of transparency you are on, and probably how old you are. As both threats and weapons become more closely linked to information technology than they are to traditional warfare, the 21st century is likely to produce more heroes who are polarizing on a global basis, and fewer Nelson Mandela’s.

In contrast to this new world of electronic warfare, drones and surgical strikes, Moshe Dayan is a prime example of a 20th century warrior hero. In a new biography by Mordechai Bar-On Moshe Dayan: Israel’s Controversial Hero, he is portrayed as a complex, personally flawed leader who didn’t get the politics right. I was curious to read this book since my father told me that when he was in Vietnam in 1966 he was assigned to travel with Moshe Dayan throughout the war zone. Dayan convinced him that American efforts would end in failure, and this had a huge effect on my father’s vision of the war and his own government career. After Dayan’s sojourn in Vietnam, and public proclamations of what he told my father, he went on to win the 1967 Six Day War, suffer defeat during the 1973 Yom Kippur war, and finally, work towards the Israel-Egyptian peace accords. He talks about his motivation:

The necessity of questioning and rethinking the tradition and meaning of heroism is not new. The Scottish essayist Thomas Carlyle famously delivered a series of lectures on the topic of heroism. On Heroes, Hero-Worship, and the Heroic in History was first published in 1841. Yale University Press has just published a new volume that contains these lectures, as well as contemporary commentary. As editors David Sorensen and Brent Kinser relate, Carlyle suffered a bit of a dip in reputation after Joseph Goebbels revealed that in 1945 Hitler found comfort reading Carlyle’s History of Frederick the Great. This new volume should lead to a re-examination of Carlyle’s influence and contribution to knowledge. 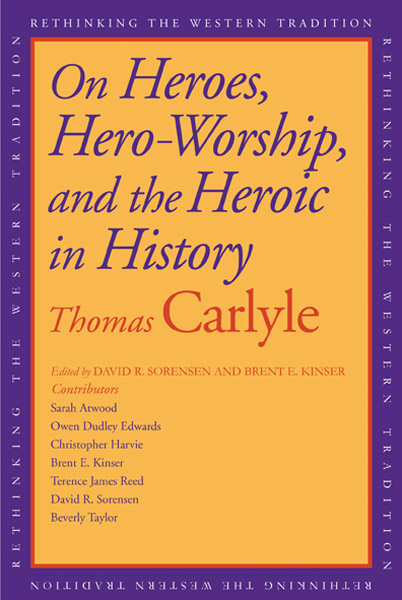 At first blush, Carlyle seems completely devoted to the idea of history as created by a few great men, an idea that would of course be appealing to any dictator. Before the days of instant mass communications, he was in fact the intellectual founder of the National Portrait Gallery in the UK, which showcases the key figures of British history. But after reading this book, the view that Carlyle was overly enamored by the influence of great men in history omits the fact that he was a philosopher as well as a historian. It focuses on Carlyle’s historical narrative rather than his philosophical vision of the development, by stages, of a more perfect society. One stage might have been the Great Man as Strong Man, but as a witness to the Industrial Revolution, he clearly recognized that technology was changing everything and the world would progress towards democracy.

It is an oversimplification to say that Carlyle thought that great men were all that mattered, to the exclusion of politics, economics, geography and demographics. Perhaps this perception is due to the vivid style and popularity of his essays on heroism. In On Heroes he discusses six kinds of heroes: Divinity, Prophet, Poet, Priest, Man of Letters, and King and gives examples of each. (Women, not surprisingly, are entirely absent but we will assign that to the myopia and reality of the times.) Carlyle’s contribution of the Great Man theory, which basically states that we need great men to lead us, is also balanced by one of his most famous quotes: “No man is a hero to his valet.” Long before we became disillusioned by the personal foibles of JFK and Bill Clinton, he argued for both transparency and acceptance of our leaders as human beings. As long as they are truthful and sincere, we can accept their weaknesses. The only thing a hero cannot do is lie, and he is pointedly critical of Napoleon for not telling the truth.

In Kinser’s provocative chapter in this new edition Carlyle, Social Media and the Digital Age he rates Steve Jobs according to Carlyle’s definition of heroism. Yes Jobs was difficult, but he believed in his mission and was sincere and truthful. This kind of leader is necessary at a certain stage. As Kinser notes, ultimately Carlyle believed in the end of government, and would have been fascinated by the Arab Spring. In his discussion of Martin Luther, Carlyle wrote of revolution and the eventual end of hero worship:

In this wild revolutionary work, from Protestantism downwards, I see the blessedest result preparing itself: not abolition of Hero-worship, but rather what I would call a whole World of Heroes. If Hero means sincere man, why may not every one of us be a Hero?

But where would the romance be in a world without heroes? In his introduction to On Heroes, editor David Sorensen quotes Mustapha Mond in Aldous Huxley’s Brave New World: “civilization has absolutely no need of nobility or heroism. These things are symptoms of political inefficiency. In a properly organized society like ours, nobody has any opportunities for being noble or heroic.” Thereby underlining how dry a society without heroes might actually be, even though in general hero worship has been declining steadily.

Perhaps we are moving toward the world that Carlyle envisioned, “a whole world of heroes”. There is another new book approaching release, Heroes of the Night, about a global phenomenon called “Real Life Super Heroes”. These are people around the world – some do get dressed up like they are attending a comic book convention – who actually do real things like patrol neighborhoods, gather food donations, and shelter the homeless. It is a brave new world, but we evidently still need heroes.

Lyric Hughes Hale is a writer and contributor to a range of publications, including the Financial Times, Los Angeles Times, USA Today, Current History and Institutional Investor.

What’s Next? Unconventional Wisdom on the Future of the World Economy by David Hale and Lyric Hale is available now from Yale University Press.

What is archaeology? The word may bring to mind images of golden pharaohs and lost civilizations, or Neanderthal…