Yale University Press’ Little Histories collection is a family of books that take a closer look at some of the most significant events, ideas, discoveries and people throughout history. To celebrate the launch of the paperback edition of William Bynum’s A Little History of Science, we’re proud to present an exclusive extract from this acclaimed title. This piece, taken from the chapter ‘Airs and Gases’, investigates the fascinating work of Joseph Priestley and Antoine–Laurent Lavoisier, who is now known as the ‘father’ of modern chemistry. What did Lavoisier do to deserve this lofty title? Read on to find out! 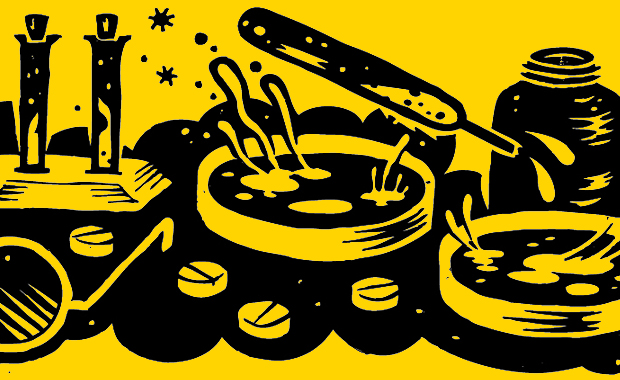 “No one was as successful in pneumatic chemistry research as Joseph Priestley (1733- 1804). Priestley was remarkable. A clergyman, he wrote books on religion, education, politics and the history of electricity. He became a Unitarian, a member of a Protestant group that believed that Jesus was only a very great teacher, not the Son of God. Priestley was also a materialist, teaching that all the things of nature could be explained by the reactions of matter: there was no need for a ‘spirit’ or ‘soul’. During the early days of the French Revolution, which he supported, his house in Birmingham was burned down by people who feared that liberal religious and social views like his might bring revolution across the Channel. He fled to the United States, where he lived the last ten years of his life.

Priestley was also a very busy chemist. He used fixed air to make soda water, so remember him the next time you have a fizzy drink. Priestley identified several new gases, and like all pneumatic chemists, he wondered what happens when things burn. He knew air played a part in burning, and he also knew that there was a kind of ‘ordinary’ air that surrounds us. He made this ‘air’ by heating a substance that we know as mercury oxide, and collecting the gas in a water bath. He showed that animals could live in it, as plants could in fixed air. Priestley’s new ‘air’ was something special: indeed, it seemed to be the principle that was involved in many chemical reactions, as well as in breathing and burning. He thought it could all be accounted for by a substance called ‘phlogiston’, and that all things that can burn contain phlogiston, which is released in the burning process. When the air around becomes saturated with phlogiston, they can no longer burn.

Many chemists used this idea of phlogiston to explain what happens when things burn, and why some ‘airs’ would make things in a closed container burn for a time, and then seem to make them go out. Burn a lump of lead, and the product (what is left behind) will be heavier than the original lump. This suggested that phlogiston, which scientists thought was contained in the lead and was released through burning, must have a negative weight – that is, it makes whatever contains it lighter than things that don’t contain it.

When most things burn, the products are gases that are difficult to collect and weigh. Burn a wooden twig, for example, and the product that is easy to see – the ash – is much lighter than the original twig; to get the total weight of the product, the gases given off would have to be collected, weighed and added on.

In Priestley’s scheme, phlogiston took the place of what we call oxygen, except that it had almost exactly the opposite properties! For Priestly, when things burned, they lost phlogiston, and became lighter; but we would say they combine with oxygen, and we now know that things het heavier when this happens. When the candle went out in a closed container, or if a mouse or bird died after a while of being sealed inside a closed container with ordinary air, Priestley said it was because the air was saturated with phlogiston; we now know that it’s because the oxygen has been used up. It reminds us that it is possible to do very careful experiments, and take careful measurements, but explain the results in very different ways.

The man who named oxygen is still known as the ‘father’ of modern chemistry. Antoine–Laurent Lavoisier (1743-94) met a violent death during the French Revolution. He was arrested, tried and guillotined, not because he was a chemist, but because he was a ‘tax farmer’. In pre-Revolutionary France, rich men could pay a fee to the State to become tax collectors, and then keep what they could collect. The system was rotten, but there is no evidence that Lavoisier abused it. In fact, he spent a lot of his time before the Revolution doing important scientific and technical research for the State, investigating a number of important questions in manufacturing and agriculture. But he was an aristocrat, and the Revolutionary leaders hated him and his class, and he paid the price.

Like Priestley, Cavendish and the other pneumatic chemists, Lavoisier was an enthusiastic experimentalist, and was helped by his wife. In fact Madame Lavoisier was an important figure in science. Marie-Anne Pierette Palutze (1758 – 1836) married Lavoisier when she was only fourteen years old (he was twenty-eight), and they worked together in the laboratory, performing experiments, taking readings and recording the results. In addition, Madame Lavoisier was a charming hostess. She and her husband entertained learned men and women who discussed the latest developments in science and technology. Theirs was a happy marriage of real partners.

As a schoolboy, Lavoisier loved science. His sharp mind and scientific ambition were evident from an early age. Like most students who studied chemistry then, he grew up with the phlogiston idea, but he exposed a number of logical and experimental flaws in it. Lavoisier was determined to have the best apparatus available. He and his wife devised new laboratory equipment, always with the aim of improving accuracy in chemical experiments. He used very accurate scales to weigh substances in his experiments. Several different kinds of experiments convinced him that when things burn, the total weight of all their products increases. This involved collecting and weighing the gases that combustion produced.

Lavoisier also continued to investigate what happens when we (and other animals) breathe. These experiments assured him that the substance involved in both combustion and respiration was a single, real element, and not some kind of substance like phlogiston. This element also seemed to be necessary for acids to form. The chemical reactions of acids and alkalis (the latter are sometimes called ‘bases’) had long fascinated chemists. Remember Robert Boyle’s invention of litmus paper? Lavoisier continued this line of work. Indeed, he believed that oxygen (which means ‘acid former’) is so important in acids that they always contain that element. We now know that this is not true (hydrochloric acid, one of the most powerful acids, contains hydrogen and chlorine, but no oxygen). Yet much of what Lavoisier said about oxygen is still part of our knowledge today. We now know it is the element needed for things to burn, or for us to breathe, and that those two seemingly different processes have much in common. Humans use oxygen to ‘burn’, or process, sugars and other things as we eat, to give our bodies energy and carry out our daily functions.

Lavoisier and his wife continued with their chemical experiments during the 1780s, and in 1789, just on the eve of the French Revolution, Lavoisier published his most famous book. Its English title is Elements of Chemistry, and it is just that. It is the first modern textbook of the subject, full of information on experiments and equipment, and containing his reflections on the nature of the chemical element. We now call an element some substance that cannot be broken down any further by chemical experiments. A compound is a combination of elements which, given the right experiment, can be broken down. So water is a compound, made up of two elements, hydrogen and oxygen. This distinction was at the heart of Lavoisier’s important book. His list of elements, or ‘simple substances’, did not contain all the elements chemists now recognise, as many had not yet been discovered. It did include surprising things such as light and heat. But Lavoisier laid down the basic framework for understanding the difference between an element and a compound.

Just as important was his belief that the language of chemistry must be precise. With several colleagues, Lavoisier reformed the language of his subject, demonstrating that to do good science, you needed to be precise with the words you use. (Linnaeus would have agreed.) Chemists needed to be able to refer to the compounds and elements they were experimenting with, so that any other chemist, anywhere in the world, would know they were dealing with exactly the same things. He wrote, ‘We think only though the medium of words.’ After Lavoisier, chemists increasingly shared a common language.”

From Returning Soldiers to Travelling Merchants: Yale triumphs at at Longman-History Today Awards

January has been a successful month for Yale University Press, as ALAN ALLPORT’s Demobbed: Coming Home After the…