Pliny’s Natural History (A.D. 77-79) served as an indispensable guide to and exemplar of the ideals of art for Renaissance artists, patrons, and theorists. Bearing the imprimatur of antiquity, the Natural History gave permission to do art on a grand scale, to value it, and to see it as an incomparable source of prestige and pleasure. In Pliny and the Artistic Culture of the Italian Renaissance, Sarah Blake McHam surveys Pliny’s influence, from Petrarch, the first figure to recognize Pliny’s relevance to understanding the history of Greek art and its reception by the Romans, to Vasari and late 16th-century theorists. McHam charts the historiography of Latin and Italian manuscripts and early printed copies of the Natural History to trace the dissemination of its contents to artists from Donatello and Ghiberti to Michelangelo and Titian. Meanwhile, benefactors commissioned works intended to emulate the prototypes Pliny described, aligning themselves with the great patrons of antiquity.

In this extract, McHam outlines the foundations of Pliny’s unexpected visual influence and explains why this is still part of Western culture. Pliny and the Artistic Culture of the Italian Renaissance is available now from Yale University Press, and a full gallery of images can be seen on our Facebook page.

More than a millennium after Pliny the Elder (c. 23 – 79 AD) wrote his monumental Natural History, it became Italy’s primary window into the world of antiquity. The book’s unparalleled scope – the entire realm of nature – and its memorable 160 anecdotes enlivened the art and culture of classical Greece and Rome for eager Renaissance readers. The Natural History told them what materials and techniques to use, what subjects to portray, what styles to emulate.It showed them how to comport themselves as artists, collectors, and viewers, and explained how to judge works of art. From the comfort of their armchairs powerful figures such as Ferdinando I, King of Naples, could peruse manuscripts like this late fifteenth-century translation that was personalized, not just with emblems of coats-of-arms but with a frontispiece commemorating Pliny’s death in his territory (Fig. 1). Pliny had fallen victim to the noxious fumes of Vesuvius, to his own conscientious sense of responsibility to his day job as executive commander of the Roman fleet in the Bay of Naples, and to his after-hours passion for studying and recording everything of note for his encyclopedia. His curiosity extended to the Greek objects brought to Rome and their Roman installations, which made the Natural History an indispensable help to Renaissance readers intent on deciphering anew the fragments and ruins of the ancient civilization that surrounded them.

Renaissance readers put Pliny’s text to new purposes for which we rely on it today. They recognized that it provided the only extant history of Greek painting and sculpture. Never superseded, Pliny’s schema and characterizations undergird the entire historiography of Greek art.

The Natural History had been consulted all through Roman and medieval times because it was the sole surviving Roman encyclopedia, and Pliny had synthesized scores of lost erudite Greed and Latin specialized sources. This accident of history made Pliny’s volume indispensable. Distinguished figures like the Venerable Bede relied on it for his scientific and historical writings. Unlike Bede, however, most consulted the Natural History for specific purposes because of its length and multifarious contents, rather than reading it from cover to cover.

In order to facilitate that sort of specialized consultation, Roman and medieval scholars made summaries, or epitomes, of certain sections of the encyclopaedia, a decision encouraged as well by the daunting task of copying the whole text. The three most common types condensed Pliny’s discussion of the exotic peoples who inhabited territories outside of the civilizing embrace of Rome’s empire, his accounts of medicinal cures derived from plants and animals, and his treatment of semiprecious and precious gemstones.

The sections on humanoid foreign races were excerpted in the early third century by the Roman Solinus. His extremely popular epitome may have been illustrated, although the Natural History itself never was during the Roman and medieval periods. The legacy of Pliny’s ethnographic chapters led to the representation of the fantastic peoples he described, which are today known as the “Plinian peoples,” appearing  in contexts as different as bestiaries, the lunette at Vézekat depicting the apostles’ mission, and the illuminations accompanying Marco Polo’s travel accounts. Those illustrations in turn influenced the miniature paintings beginning the ethnographic chapters in the manuscripts of the Natural History that first appeared in the late fourteenth century, here with Roman ethnographers cataloguing the strage humanoids. Even today when the world outside of the Roman Empire is well-tred territory, these creatures infiltrate our imaginations beginning in childhood, as attested by the dufflepuds in C.S. Lewis’s Narnia Chronicles.

– from ‘The Art History of a Book on Science’, the first Chapter of Pliny and the Artistic Culture of the Italian Renaissance by Sarah Blake McHam 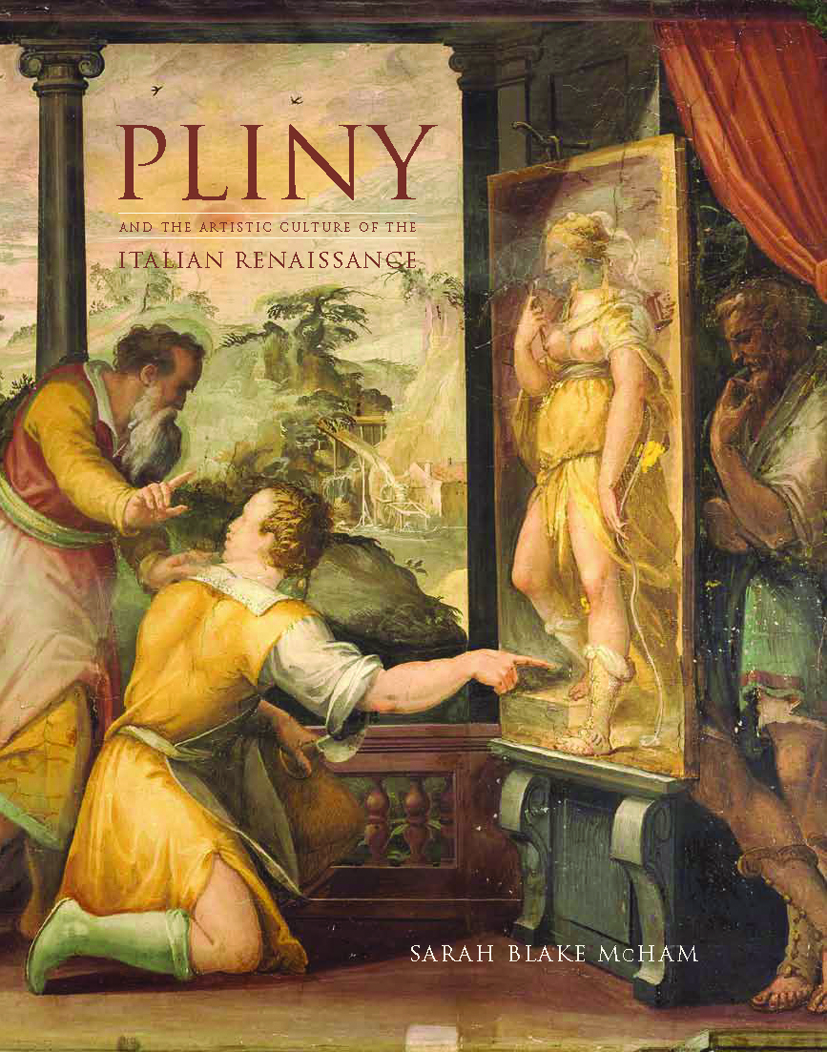 Pliny and the Artistic Culture of the Italian Renaissance